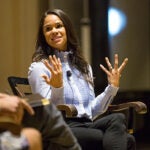 A new test that helps people confirm that they’ve taken a life-saving HIV drug, a nonprofit that helps people navigate personal bankruptcy, and a venture working to accelerate artificial intelligence were the big winners in Tuesday’s President’s Innovation Challenge awards ceremony at the Harvard Innovation Labs.

President Drew Faust awarded each of the three student ventures, UrSure, Upsolve, and Lightmatter, with $75,000 in prize money to help transform their innovative ideas into real, world-changing ventures.

“Your aspirations are so exciting because they are bold, they are risk-taking, and they are devoted to imagining the world as a better place — fairer, healthier, safer,” said Faust in her introduction. “It is so inspiring to see what you are trying to accomplish, for young children, for people who have found themselves in financial distress, for women who need health care, for a whole range of different problems that we’ve seen addressed in these proposals.

The President’s Innovation Challenge is open to any Harvard student from any School. This year, 440 student teams submitted declarations of interest, a record 200 teams entered business plans in the competition, and 15 finalists were selected in March. All 15 finalists gave elevator pitches for their companies at the ceremony.

Harvard Innovation Labs Managing Director Jodi Goldstein said she was proud that all 12 Harvard Schools were represented among the applicants, reflecting the spirit of President Faust’s One Harvard initiative. “In fact, half of our finalist teams contain a mix of teammates from different Schools,” she said.

Based on voting by the audience, an inaugural Crowd Favorite prize of $10,000 was awarded to one other team: Two Rabbits, a venture bringing culturally adapted curricula and teaching to schools at the margins of society.

UrSure’s CEO and founder Giffin Daughtridge, whose venture received The Bertarelli Foundation $75,000 grand prize, said, “This is an absolute game-changer for us.”

“We had enough funding to get through the next couple of months, but this will help us accelerate our timeline,” said Daughtridge, who is about to receive dual degrees in medicine from the University of Pennsylvania and a master’s in public policy from the Harvard Kennedy School of Government.

Upsolve CEO Rohan Pavuluri, whose team won the Social Impact or Cultural Enterprise grand prize, said, “The beauty of startups is that they are an outlet to make a change in the world. You can choose any problem you want and start working on it.

The President’s Innovation Challenge underwent some significant changes in its sixth year, merging what previously had been two separate challenges: one in which the prizes were selected by Harvard’s deans in categories such as health and life sciences, cultural entrepreneurship, and sports, and a separate President’s Challenge that invited students to create early stage ventures to solve specific global problems. Additionally, a new Open Track was created this year, allowing for greater diversity of student ventures entering ideas that defy easy categorization.

“This is validation that we have a good idea and that we should keep going forward with our business,” said Open category winner Lightmatter’s Nicholas Harris. “It’s really raised our energy, and we are going to try to raise money this summer to make Lightmatter a real thing. This money is going to help make that happen.”

“By empowering these students as they go through the experience of building a venture, we are unlocking the personal potential that other types of endeavors tend not to,” Goldstein said, “That’s why this competition exists. Because people who otherwise wouldn’t have participated in the entrepreneurial process can build, learn, fail, and grow.

“It’s an important distinction,” she added. “This isn’t just a business plan competition. We aren’t just evaluating the business potential of these teams. It’s about the students and the realization of their potential for impact.”