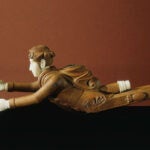 What did John F. Kennedy sound like as a vivacious 20-year-old, a young man who liked to balance his Harvard studies with ample amounts of sports and socializing, and whose first run for office was still almost 10 years away?

The iconic Hyannis-set home movies starring the tanned and toned Kennedy clan playing a game of touch football, or waving from the deck of a sailboat, have a prominent place in the nation’s collective memory. But the voice of the college-age JFK was lost to time — until now.

Harvard has just released what its archivists believe is the earliest voice recording of the future president, who, as it turns out, sounded a lot like a politician even as a young man. The restored recording is part of a new exhibit at the Harvard University Archives that explores Kennedy’s Harvard ties. It captures Kennedy delivering a 1937 speech about Supreme Court Justice Hugo Black for the College public speaking course “English F.”

“As far as we know, this is the earliest known recording of his voice in a research collection,” said archivist Megan Sniffin-Marinoff, who worked with the recording and helped curate the new exhibit “JFK’s Harvard/Harvard’s JFK.” She said that the  John F. Kennedy Presidential Library and Museum, in Boston, holds no recording earlier than a 1940 radio interview, as far as her staff is aware.

Kennedy’s familiar speaking pattern and Boston accent come through clearly on Harvard’s restored audio file. And though an occasional pause punctuated by an “uh” is scattered throughout his talk, a confident voice delivers his political message. In the 1-minute, 28-second clip, which Sniffin-Marinoff thinks was probably part of a longer address, Kennedy discusses Black’s appointment to the Supreme Court by President Franklin D. Roosevelt. The selection generated controversy after information about Black’s ties to the Ku Klux Klan came to light.

Harvard officials have been aware of the recording since it arrived several years ago as part of a collection of material related to Harvard professor Frederick Clifton Packard Jr. Packard taught the course in Harvard’s Holden Chapel and had been recording his students since the 1920s. (He also established the Harvard Vocarium, a project that produced recordings of famous poets including T.S. Eliot, Elizabeth Bishop, Wallace Stevens, and Ezra Pound.)

The restored Kennedy recording is part of an ongoing effort to preserve the thousands of pieces of audio material housed at the University Archives, among them the hundreds of discs from Packard’s class. Helping to lead that effort is David Ackerman, the head of media preservation services at the Harvard Library, and likely the first person to hear the young Kennedy’s voice in 80 years.

“I was really struck by how recognizable his voice was, even through the noise,” said Ackerman, who transferred the recording from its original aluminum disc to a digital audio format before passing it to an engineer who cleaned up the clicks, pops, and crackles.

Though Kennedy is among several speakers on the two-sided disc, he is one of only two who discussed Black. His classmates preferred more mundane subjects, such as book collecting, sourdough, and how to find a wife.

For Ackerman, Kennedy’s choice of topic was an early indication of his aspirations. “This is why he became president. There was something in him that had him picking material like that.”

Kennedy scholars and enthusiasts will be happy to learn the recording is likely just the beginning. Sniffin-Marinoff said she is hopeful that as the Packard work continues archivists will find other Kennedy recordings. There could be additional discs containing the voices of both of John and of his older brother, Joseph P. Kennedy, who was also enrolled in Packard’s public-speaking class.

“As a collection of recordings of early voices it’s really remarkable,” she said. “We are pretty sure there’s more Kennedy material.”

The Kennedy exhibit coincides with the 100th anniversary of the president’s birthday on May 29, which will be celebrated across the country in a series of memorials, ceremonies, and services, thanks in part to congressional support through the John F. Kennedy Centennial Commission.

The Harvard exhibit highlights material from Kennedy’s time as a student, as well as his connections to the University during his presidency, including his ties to the Harvard administration and to the many faculty members who played key roles in his administration. His Harvard legacy is symbolized most prominently by the renamed John F. Kennedy School of Government (originally the Harvard Graduate School of Public Administration) and the creation of its Institute of Politics in his honor.

Visitors will also be able to see the original copy of the future president’s 1956 Harvard Commencement speech, recently donated to the University by David M. Rubenstein, who will join the Harvard Corporation in July. In it, the future president called for a greater understanding between American intellectuals and politicians. Some considered the address an attempt by Kennedy to assuage critics who complained he hadn’t taken a tough enough stance against red-baiting Sen. Joseph McCarthy.

“It is regrettable that the gap between the intellectual and politician seems to be growing,” said Kennedy at the Tercentenary Theatre ceremony. “Instead of synthesis, clash and discord now characterizes the relations between the two groups much of the time.”

The speech was recently put into context by Harvard President Drew Faust, who contributed an essay about it for the book “A Vision for America: JFK in Words and Pictures,” edited by Stephen Kennedy Smith and Douglas Brinkley, also on display.

“Kennedy’s appeal for a recognition of the ‘mutual dependence’ of the worlds of politics and intellect, his call for a central role for learning and expertise, are all too timely today, at a moment when we seem to have forgotten the lessons of Sputnik and entered into what some have dubbed a ‘post-factual’ era in American public life,” Faust wrote. 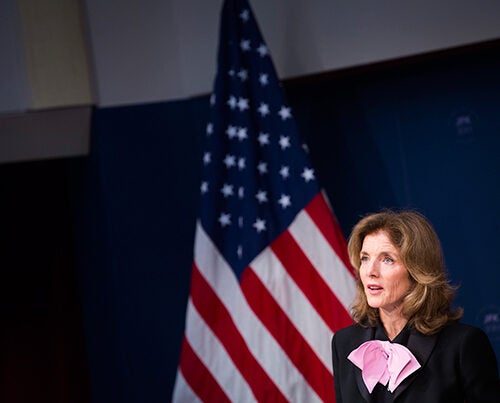 Among the exhibit’s many photos is a shot of JFK as one of 49 in the Harvard football team’s picture from 1940, wedged between similarly stripe-shirted, broad-shouldered classmates. Nearby is an image of a smiling Kennedy amid a crowd watching a Harvard football game in October 1963, only a month before his death.

The exhibit also captures how one of the darkest chapters in the nation’s history — Kennedy’s assassination on Nov. 22, 1963 — resonated across campus. Included are telegrams urging Harvard President Nathan M. Pusey to postpone the Harvard-Yale football game scheduled for the following day, as well as correspondence between Pusey and the Kennedy family.

A January 1964 note from Jacqueline Kennedy thanks Pusey for sending her letters written by students “throughout the world on the death of the President.” In a letter from November 1964, she declines his invitation to an unveiling of a portrait of her late husband. She wrote: “Later on I will want to see the portrait, but right now it would be a little too painful an experience for me.”

Other manuscripts point to the role Harvard faculty played in trying to unravel theories swirling around the assassination. In the papers of former physics professor and Nobel laureate Norman Ramsey, who was part of the National Research Council Committee on Ballistic Acoustics, is a copy of the audio recording of the assassination picked up by a Dallas police officer’s microphone. As chair of the committee, Ramsey and a team of analysts determined the tape did not support theories of a second gunman.

“The material offers up a deeper look at what happens at Harvard in the wake of his death, and that’s represented in the collection here,” said Sniffin-Marinoff. “But there’s so much more in the archives’ collection to remind us about his life and his Harvard connections.”