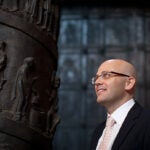 Though it’s been a century since the birth of President John F. Kennedy ’40, and more than half a century since he articulated his inspirational and optimistic vision of the United States as a force for prosperity and peace, his words and ideals remain deeply pertinent.

“It was here at Harvard that my father became the man that he would be … a student engaged in the world. He combined his passion for history with his commitment to public service,” said Caroline Kennedy ’80 during a symposium on Thursday to commemorate the centennial of the late president at Harvard Kennedy School (HKS).

Speaking of her father’s enduring popularity and influence, Kennedy said, “Fundamentally, it has to do with his vision of America in the world. A vision of hope, combined with a strategy of peace, is the greatest source of American power and global security.” It was a vision “he articulated the moment he became president and lived by all of his life.”

That standard, set out in the Kennedy’s 1961 inaugural address, is still what America is judged by, said Kennedy, who was U.S. ambassador to Japan during the Obama administration. “We are still the leader and defender of an international, rules-based order that works to strengthen multilateral institutions, advance the sovereignty of nations, and secure basic human rights.”

The daylong event featured discussions with faculty, government officials, thought leaders, as well as members of the Kennedy and Shriver families, reflecting on the enduring relevance and instruction offered by Kennedy’s principles and priorities, including America’s central role in the world, the legacy of civil rights, and ongoing interest in the future of international development, environmental policy, and public leadership.

Referencing then-U.S. Senator Kennedy’s return to Harvard in 1956 to give the Commencement address, President Drew Faust noted his championing the importance of intellectual life.

“Kennedy’s appeal for recognition of what he called the mutual dependence of the worlds of intellectuals and politicians, his call for a central role for learning and expertise, these are all too timely today as we find ourselves in what some have dubbed a ‘post-factual era’ in American public life,” Faust said.

During a discussion on America’s power in a changing world, panelists critiqued excerpts from a lesser-known but significant speech to graduates at American University in June 1963. Known as the “peace speech,” Kennedy spoke of humanity’s new fragility and interconnectedness amid the threat of nuclear war’s mutually-assured destruction, and why America must therefore relentlessly pursue peace around the world.

“For in the final analysis, our most basic common link is that we all inhabit this small planet, we all breathe the same air, we all cherish our children’s future, and we are all mortal,” Kennedy said shortly after he had stared down nuclear catastrophe during the Cuban Missile Crisis.

The speech was Kennedy’s attempt to explain what he learned during the grave and defining event of his presidency, the Soviet Union’s 1962 installation of nuclear missiles pointed at the U.S. mainland from Cuba. It was “a reasoned account of an insane situation” that has parallels in the perils of North Korea’s recent nuclear provocations, said Graham Allison, Douglas Dillon Professor of Government and longtime director of the Belfer Center for Science and International Affairs.

“The Cuban Missile Crisis was his finest moment of crisis management, but the American University speech was his finest moment as a statesman,” said Joe Nye, Harvard University Distinguished Service Professor. The speech marked “a turning point” in U.S. policy on nuclear weapons, one that ushered in the start of arms control and set in motion “a totally new way of approaching it” by turning away from ubiquitous Cold War rhetoric and proposing a plan that involved compromise.

“President Kennedy accepted the mantle of this liberal world order, the leadership of it and the structure of it, and the urgent necessity of it, and that’s called into question now,” said Nicholas Burns, Roy and Barbara Goodman Family Professor of the Practice of Diplomacy and International Relations at the Belfer Center. “So we have a big debate in 2017 about what kind of country we are, what kind of leader we are in the world.”

The conditions of tied-in destiny that Kennedy identified 50 years ago have only expanded since then, with the growth of economic globalization, the internet, climate change, pandemics, and foreign policy more broadly.

“When President Kennedy says, ‘Let us focus on the means by which we can resolve our differences,’ that clearly is a call for diplomacy. But it’s also a good reminder that when we look at these new ways in which we have tied our destiny to every other person on the planet, these new challenges cannot be addressed through military force or conflict,” said Meghan O’Sullivan, Jeane Kirkpatrick Professor of the Practice of International Affairs and director of the Belfer Center’s Geopolitics of Energy Project, they “can only be addressed through international cooperation.”

The development of instruments of war has outpaced the instruments of peace, as Kennedy noted. It’s a quagmire that has grown since the 1960s, hobbling contemporary efforts to resolve difficult conflicts in countries like Syria and Iraq.

“We have a better sense of how to handle war, and we have failed so often at handling peace or trying to achieve peace,” said O’Sullivan, and too often the complexity of forging peace is used as a justification for disengagement. Kennedy reminded listeners that “we cannot believe in the impossibility of peace. We should never use that view — that some people are just committed to conflict — as a reason for inaction.”