A call to do justice 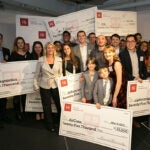 David E. White Jr. and his passion for justice, leadership and public service

For five years in the Army, including one in Afghanistan, David E. White Jr. was zealous about leadership and public service. At Harvard Law School (HLS), he added to his passionate pursuits.

A graduate of U.S. Military Academy at West Point, White said, the school deepened his desire to serve something greater than himself with character and integrity. At Harvard, hoping to discover the power of the law to create peace, he found he aspired as strongly to justice.

“The Law School is a training ground a little bit as West Point was, but it’s quite different,” said White, a 2009 West Point graduate. “Here, no one is going to shoot at you, but it’s where you learn to take your rights back.”

During a course on the arts’ capacity for restorative justice, White became convinced that the pursuit of justice should go beyond the legal system and reach into all realms of life.

For that course, “Vision and Justice: The Art of Citizenship,” taught by Professor Sarah Lewis, White wrote an essay on the Winslow Homer painting “Sea Garden, Bahamas” (1885) in the Harvard Art Museums’ (HAM) collection. He praised Homer for endowing “his black subjects with an unmistakable sense of agency, beauty, and personhood,” at a time when the opposite was the norm. Some of White’s essays examining the interplay of art, race, and justice are posted on the HAM website.

In his second year, White founded an independent hip-hop label to sign MRG, a hip-hop artist who wrote a song about the 2015 killing of Walter Scott, an unarmed black man shot in the back by a white police officer in North Charleston, S.C.

“The arts have the capacity to influence people’s views, initiate change, and do justice,” he said. “When I heard this song, I thought, this is a message that needs to get out there. We can do justice to Walter Scott, who was going about his day and who, for no reason at all, was … killed.”

White’s fully realized justice includes more recognition at the Law School of the contributions of African-Americans. On a recent afternoon, White stood in the Caspersen Room (formerly the Treasure Room), which showcases paintings, manuscripts, and memorabilia that document the School’s history.

In front of the portrait of Isaac Royall Jr., an 18th-century slaveholder who helped to establish the School with a bequest from his estate, White suggested two African-Americans, whose portraits or likenesses, could be represented in the room: Reginald Lewis ’68, who co-founded Wall Street’s first African-American law firm and gave HLS $3 million, the largest donation in the School’s history at the time, or Belinda Sutton, an African woman enslaved by the Royall family, who claimed a pension in the Massachusetts courts from the Royall estate.

“I’m concerned about what signal we’re sending about whom we treasure,” said White, a member of the Harvard Black Law Students Association.

After graduation, White will clerk for Judge Paul J. Watford, of the U.S. Court of Appeals for the Ninth Circuit, in Pasadena, Calif. White hopes to end up in government, elected office, or wherever he can do “the most good for the greatest amount of people.”

White’s family has a history of military service, and joining the Army was a natural step for him. His younger brother Daniel also went to West Point and was sent to Kuwait.

As a child in Milton, N.Y., White dreamed of leading soldiers in combat. In 2011, at age 23, he was deployed to Kandahar, Afghanistan. As platoon leader, he led 21 soldiers on patrols in the Kandahar region, trained Afghan security forces, and took part in operations to capture Taliban and al-Qaida insurgents.

In one of those missions, a suicide bomber blew himself up at a busy checkpoint where White’s platoon was waiting to meet its Afghan counterparts.

“Everyone in my unit survived,” said White. “My right arm was cut and fractured. The bone was sticking out, and I was bleeding all over myself. But I didn’t realize it until a medic told me and applied two tourniquets.”

White underwent surgeries in Afghanistan, Germany, and the United States. He was awarded a Bronze Star, a Purple Heart, and a Combat Action Badge for actions in Afghanistan.

On his return to the States, Captain White worked in the Warrior Transition Unit at West Point, where he helped soldiers transition back to active duty or into civilian life. He said law school was always in the back of his mind as a way to prepare himself for a career of public service. His last day on Army active duty was his first day at HLS.

White said he owes his success to his family, from the grandfather who helped him pay his first year’s tuition at New York Military Academy, which he attended from sixth grade through 12th grade, to his mother and two siblings, who were always supportive, to his father, who worked his way up from being a prison guard to earning a doctorate in public health.

“My father is my personal hero,” he said. “I won the parent lottery. They made me believe that I could do what I set my mind to.”

White relishes his interactions with Law School faculty and students, and his love for the arts here has made him a collector of political and pop art. But more than anything, he appreciates learning the importance of questing for justice within and beyond the court system.

“For me, this Law School is a justice school,” he said. “But it’s also a school of leadership. Here, we’re trained to be lawyers, but also to be leaders. When we leave this School as leaders, we can [influence] change in a world that needs more justice.”