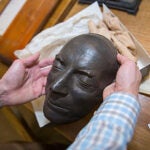 Some of Harvard’s most gifted performers past and present came together at Sanders Theatre on Friday to celebrate the 25th anniversary of Arts First.

Directed by Diane Paulus, artistic director of the American Repertory Theater (A.R.T.), “A Celebration of Harvard Artists” showcased the highest caliber of campus arts. When Oscar-winner Matt Damon took the stage to reminisce about his time at Harvard 25 years ago, he spoke humbly about being in the company of such extraordinary performances.

“Making something with other people is the best thing we can do as human beings,” he said. “The arts are the greatest tool of empathy that I’ve been able to find.”

Entertainment came in every form and combination. Composer-pianist Vijay Iyer, the Franklin D. and Florence Rosenblatt Professor of the Arts, played with Director of Harvard Jazz Bands Yosvany Terry (saxophone and shekere) and doctoral student Rajna Swaminathan (mridangam, a two-headed drum). Harvard-trained composer Justin Hurwitz, who won an Oscar for “La La Land,” sent a video introduction for Liz Leimkuhler ’15, who sang the film’s “City of Stars” with piano accompaniment from Brian Ge ’18. Grant Hoechst ’18 played marimba with performers from the Silk Road Ensemble. In a lighter moment, Alexis Wilkinson ’15, the first African-American woman to serve as president of the Harvard Lampoon, read “Owning It,” about her first urinary tract infection.

Emmy and Tony winner Courtney B. Vance acted as master of ceremonies, joining the audience in celebrating the many powerful moments on stage. In one, Nicholas Britell ’03, who wrote the score for Oscar-winning “Moonlight,” showed clips of two pivotal scenes in the film, then repeated each a second time adding live music on piano (with Tim Fain on violin). Equally impressive was a tango scene from “Arrabal,” which opens May 12 at the A.R.T. The show’s writer, John Weidman ’68, introduced the dancers, who spun across the stage with strength and precision.

Damian Woetzel ’07 brought the crowd to its feet — literally. Recalling Lincoln Kirstein ’29, who founded the School of American Ballet and the New York City Ballet, Woetzel taught the opening sequence of “Serenade” to the audience, who included John Lithgow, Arts First founder and this year’s Harvard Arts Medalist, and President Drew Faust. Students in the Harvard Dance Project followed with a performance of “Echad Mi Yodea,” a dynamic contemporary piece by Ohad Naharin.

Late in the evening, Damon introduced students from the Theater, Dance & Media concentration for a reading of quotations about the importance of art from other Harvard alums, including Margaret Atwood, Gertrude Stein, and former Presidents Barack Obama and John F. Kennedy.

One of the students remembered “West Side Story” composer Leonard Bernstein ’39: “This will be our reply to violence. We will make music, more intensely, more beautifully, more devotedly than before.” Ge, Hoechst, and Leimkuhler then returned to the stage. Joined by the Silk Road Ensemble, they performed “Tonight.”