A ‘Catalogue’ of dance 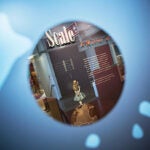 'Scale' tells the story of how, and what, we measure

Between them, dancers Jill Johnson and Christopher Roman have almost 50 years of work that was created by and with William Forsythe, their choreographer, teacher, mentor, and friend.

Johnson, dance director for Theater, Dance & Media and artistic director of the Harvard Dance Project, and Roman, artistic director of the Dance On Ensemble, will perform a culmination of this shared well of knowledge when they present “Catalogue (First Edition)” for the Harvard community on Wednesday in the Widener Library Rotunda. The new Forsythe work, which premiered last fall in Germany, kicks off a two-day celebration of the choreographer and the discipline sponsored by the Harvard University Committee on the Arts.

“As one grows as an artist and in life, one’s story is ever more complex,” said Johnson, who is also a senior lecturer in Theater, Dance & Music and the Department of Music and director of the Office for the Arts Dance Program. She described dancing “Catalogue (First Edition)” as “a state of being.”

“It leverages this intricacy of cerebral and visceral history in a piece that is curated in real time and never the same twice,” she said.

Forsythe created “Catalogue (First Edition),” which is staged without music, for Dance On, Roman’s Berlin-based company of dancers who are over 40 years old. Johnson and Roman start the piece with four simple points on the body (hips and shoulders), and then progress through 21 modalities, which are mapped onto each other in a cumulative system of motion that gains in complexity with each layer.

“We had a mini-reunion that fed the piece you’ll see in ‘Catalogue,’” said Roman. “There are common themes, and it all came together at University of Southern California (where Forsythe teaches). It was an environment of inspiration where we interacted with the students as well as him. It was like a small company for me — the youth and energy. We spoke his language. We were taking in all this inspiration. It was living in that stew of one another.”

Like many pieces that Forsythe has choreographed, the rigorous creative process for “Catalogue” involved a manifold of iterations that were refined and honed — and sometimes scrapped — before the premiere.

“Bill is good at accumulation. We come up with thematics and materials and tasks and dramaturgy, and, nine times out of 10, he throws the structure away the day before the premiere, and starts from scratch.

“But the rigor we’ve attended to is already in our body, so when he redesigns, it’s not that we have to practice. It’s embodied material,” Roman said.

Sarah E. Thomas, vice president for the Harvard Library and University Librarian, said presenting that kind of institutional knowledge in a library setting made perfect sense.

“Bringing Jill’s dance performance into Widener provides a unique opportunity to engage with the arts and activate library spaces in new and innovative ways,” she said.

“This is something we champion at the Dance Center,” Johnson added, “posing the question: What do authorship and publishing look like in dance? To be able to conduct our field research alongside scholars in other practices in Widener is an opportunity to advance the idea that we don’t yet know all there is to know about dance. Dance is not a finished project.”

Though the piece is performed in silence, the musicality of motion between dancers who respond to each other in real time provides a kind of score.

Following the performance, Johnson and Roman will teach a master class in the Harvard Art Museums’ Calderwood Courtyard, allowing for another dynamic partnership.

“Together, our historic Calderwood Courtyard, original works of art, performers, and audience all play an active role in the interpretation of innovative dance research,” said Martha Tedeschi, the museums’ Elizabeth and John Moors Cabot Director. “This will be a unique experience in which the power of artistic expression is quite literally brought to life at the heart of the museums by the dancers.”

Luk, who teaches neuroscience at GSE, has worked with Johnson for years on a course that she teaches on motor development in children.

“In my class of adults whose motor skills are fully developed, I can explain that motor control is also learned in three sentences, but I think it’s important for adults to put in the effort to experience learning,” Luk said. “To get them to understand, Jill teaches them a series of movements, made especially for the class, for more than an hour. They often feel frustrated and intimidated. Then we reflect on what motor skills children are expected to learn during preschool, along with other academic expectations. Learning can happen in any context, not just in a classroom.”

The panel conversation will be about more than what dance can teach. Starting with a simple question posed to panelists about what they saw in the dance through the lens of their fields of practice, Johnson hopes to bring light to her approach of dance scholarship and choreographic thinking, showing that though dance research may look different than other disciplines, the processes of inquiry are often the same.

“You use your best idea or question until you have a better one.”

Johnson and Roman will perform “Catalogue (First Edition)” for the Harvard community Wednesday at noon at Widener Library, and for the public on Thursday at 6:30 p.m. at the Harvard Dance Center, 66 Garden St. A panel discussion following Thursday’s performance will begin at 7:15 p.m. There also will be a movement lab master class for students on Wednesday at 3:30 p.m. at the Harvard Art Museums, which the public can observe.