A film to ‘unpack’ Vietnam 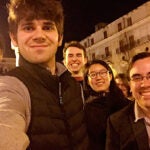 America has yet to recover fully from the Vietnam War, says documentarian Ken Burns. On Thursday evening, Harvard got a preview of his and Lynn Novick’s powerful 18-hour film, “The Vietnam War.”

Interviewed before the screening, Burns told the Gazette why now is an appropriate time to proceed with “unpacking” the war. “You need the passage of time, the triangulation of scholarly information. You need people to have reached a certain age where they can offer some wisdom. We still suffer today from the divisions that took seed in Vietnam. So maybe the virus we caught then will be serviceable for a vaccine now.”

“It seems particularly acute in this exact moment,” Novick added. “When you see the rancor and indignation that people felt during the war, and the lack of trust in leaders, that does resonate today. In fact it’s a little uncanny.”

The film doesn’t underline parallels with the present, says Burns. “History is a set of questions that we in the present ask of the past. Each war is particular and unique, but war itself is always familiar. If we could transport someone from the Peloponnesian War to Vietnam, they’d still recognize their brothers in battle.

“This is a film dealing with a White House in disarray, which is furious about leaks and huge drops of documents,” he said. “Yet we started work in 2007, so we had no idea it would become so resonant. Human nature always remains the same. But we didn’t have to put in giant, didactic neon signs saying ‘This is like Edward Snowden’ or ‘This is like Iraq.’ It was more important to tell a good story.”

Burns, Novick, and producer Sarah Botstein were present to show about an hour’s worth of excerpts from the series, which debuts on PBS-TV on Sept. 17, before a capacity house at the Harvard Art Museums. Included was a good amount of vintage footage that was likely considered too strong to broadcast at the time, including scenes of graphic carnage in the Tet Offensive, and police brutality during the 1968 Democratic Convention in Chicago.

Burns’ creative use of music remains a trademark. One montage of soldiers’ first arrival in Vietnam was set to Bob Dylan’s “A Hard Rain’s a-Gonna Fall,” and Stephen Stills’ voice singing “There’s something happening here, what it is ain’t exactly clear” from Buffalo Springfield’s “For What It’s Worth” rang out during the Chicago sequence.

But one of Burns’ strengths is his ability to tell the smaller human stories within the larger drama: A Vietnamese woman calmly recalls how she’d shot a soldier who threatened her family; a U.S. soldier, still haunted by guilt four decades later, admits he was part of a group who accepted a Vietnamese woman’s desperate offer of sex in exchange for C-rations. The brightest moment in Thursday’s screening was an American POW telling how it felt to be set free, and vividly recalling every sensory impression of that moment: the miniskirt on a TV interviewer, the breath and hair texture of the general who greeted him. This was cut with footage of an Air Force plane carrying freed POWs away from Vietnam.

In a panel discussion moderated by Anthony Saich, director of the Ash Center for Democratic Governance and Innovation at Harvard Kennedy School, Novick said that the direction of the documentary became clearer once the filmmakers found the interview subjects. “I used to think history was boring because it lacked a human element,” she said. “By talking to people, we found the stories we needed to tell, and we really learned as we went along.”

Burns compared the process to the folk tale about six blind men who touch an elephant, with each describing a different creature. “If you use the good, old-fashioned narrative and do it right, maybe you can pull back and see all of it.”

The film has a Harvard connection in that Tom Vallely, the senior adviser for mainland Southeast Asia at the Ash Center, and Ben Wilkinson, executive director of the Trust for University Innovation in Vietnam, were both on its advisory board. They provided the filmmakers with important contacts in Vietnam. Vallely is also one of the veterans interviewed in the film, and he provided titles for two of the episodes. As Burns told the crowd, “Nobody was more important than them, for opening our eyes to the kind of film we could make.”