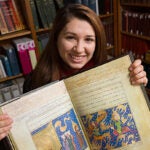 The language of learning

Aislinn Brophy is graduating with a bachelor’s degree in a concentration that didn’t exist when she started at Harvard four years ago.

The aspiring actor, playwright, and director, who has participated in more than 30 different theatrical shows in her time as student, was one of the first to study Theater, Dance & Media (TDM) when the concentration launched two years ago, and believes her pioneering experience bodes well for the future.

“My goal is to make something of myself, and TDM helped me become a better artist,” said Brophy, 20, who grew up in South Florida and had never set foot on a stage before Harvard.

A musician since the age of 7, Brophy played the violin, flute, and piano in the high school orchestra pit. During a school performance of “Gypsy,” she realized she wanted to be on, not below, the stage.

“Being a professional musician takes a lot of work and commitment to your craft, and I knew I didn’t feel strongly enough about it as a career path,” said Brody. “But I can sing and it was easy for me to transition to voice and musical theater because I know how to read music.”

Despite her inexperience, the Adams House resident approached the extracurricular theater scene with a sharp focus, auditioning for eight shows her freshman fall. She landed the part of the accountant in “Unnecessary Farce,” and “was hooked immediately.”

“At the end of the semester, someone asked if I would help build a set, and I said sure. Second semester, I knew better, learned to audition smarter, got into another show, and thought this is what I want to do,” Brophy recalled.

Because TDM wasn’t an option until her junior year, she expected to concentrate in English, filling her course requirements with dramatic literature courses.

“My family said, ‘You do theater 100 percent of the time,’” recalled Brophy, who saw the unveiling of TDM as a way to provide rigorous scholarship about all aspects of the artistic discipline.

Deborah Foster, director of undergraduate studies for Theater, Dance & Media and senior lecturer in the concentration, said Brophy embodies “the kind of interesting candidate we hope to draw to Harvard and TDM.”

“She has cast her curiosity wide here at Harvard, taken courses in all sorts of subjects, written plays, directed plays, acted in plays. She is a person who is very in charge of her own education,” Foster said. “What she’s been able to do at Harvard is quite unique. If she were in a conservatory or something akin to that, I doubt she would have had as rich an experience.”

Last fall, Brophy performed with visiting faculty Daniel Kramer, artistic director of the English National Opera, in his TDM-directed “A Dream Play.” This spring, she premiered the culmination of her own work “Dryside,” a musical about race and environment, performed at Loeb Drama Center [begins April 22].

“I’m pleased that I’m part of the first class of TDM,” Brophy said. “It used to be that I was doing theater, but I couldn’t talk about it. I didn’t know anything and I didn’t have the vocabulary. I’m leaving here having done a ridiculous number of productions. And the department has added a level of rigor that has allowed me to hone so many skills and think about things in a way I wouldn’t have before.”

Brophy also credits her time in the student-run Harvard-Radcliffe Dramatic Club, first as campus liaison, then as president, with enriching her theater life. As president, she pushed for more inclusive programming and highlighting of works and collaborations with BlackC.A.S.T. and TEATRO!, two theater groups of color on campus.

“Harvard has turned out great artists, but it always seemed an anomaly,” Brophy said. “With TDM attached to our name, we’ll be able to go out into the world and show that Harvard has artists of the highest caliber who create thoughtful work full of power and beauty.’’