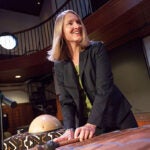 Gish Jen has made a literary career in part from writing about the experiences of Chinese-Americans. During a lunchtime talk at Harvard Law School (HLS), she discussed her latest book, “The Girl at the Baggage Claim: Explaining the East-West Culture Gap,” making the case for the sociological and cultural patterns that influence many aspects of identity.

Describing the Western reality as “pit self” (and showing a cartoon image of an avocado person) and Eastern thought as ‘flexi-self” (a bendable Gumby), Jen said Asians think of their identity as closely entwined with family and community, while Americans strive to be independent-minded. Using an image of a lion in the African Savannah to distill her argument, she said the pit self sees the lion while the flexi-self sees the savannah in relation to the lion.

Jen got support for her theory during her March 29 talk from a small panel of speakers that included HLS Assistant Professor Mark Wu and Joseph William Singer, Bussey Professor of Law, who gave many pit-versus-flexi examples in business, mental health, and family.

Singer, who is also an orchestral musician, recounted the joy in learning to play viola after years of playing first violin. “In the viola, it was much easier to hear all four parts (first and second violin, viola, and cello),” he said. “It gives me the feeling of being part of a group so much.”

Jen even talked about East-West self in the context of plagiarism, citing parents who help their children write papers and assist them in the lab.

“I’m not suggesting cheating isn’t cheating. It absolutely is,” she said. But “the boundary that means so much to us in the West simply doesn’t register to Chinese students the same way.”

She offered the thought that “most people have both selves latent in them,” and got a laugh from the audience for her explanation of New England Patriots quarterback Tom Brady, who credits his team for his success.

He is wrongly accused of “phoniness and false modesty,” Jen said, “when, of course, he’s just Asian.”