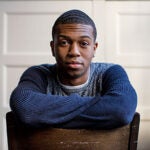 Seizing his chance to grow

He was the first American injured in the Iraq War, hit by an exploding land mine that broke his left leg, caused long-term nerve damage in his right hand, and so severely impacted his right leg that it had to be amputated to save his life. He had been in Iraq for only three hours.

While those injuries were severe, they were not the only things tormenting Marine Eric Alva while he served his country. As a gay man, had his sexuality been known, he would have been discharged from the Marines.

“It’s an interesting story, the intersectionality of my life,” said the retired staff sergeant. “I am a gay man. I am a United States Marine. … I am also disabled and I am also Hispanic.”

Alva decided he wanted to join the Marines while he was still in high school. After graduation, he went to the local recruiters’ office. At 5-foot-1 and only 90 pounds, he said the Marine recruiters “laughed at me and told me ‘the Air Force is down the hall.’” That was frustrating, he admitted, “being told ‘we don’t want you.’” But he persisted and finally got into the Corps in 1990, a year after graduating from high school.

After he returned from Iraq Alva received enormous media attention. He was featured on “The Oprah Winfrey Show” and in People magazine during his recovery and even as he took his first steps a year after his injury. With the notoriety came “invitations,” he said. Being a part of a Hispanic family, his parents would get inquiries from friends. “’Eric is still going to live a full life. He’s still going to get married. He’s still going to have kids.’

“Of course, my parents already knew I was gay,” he said.

But most people outside the immediate family did not, and Alva went to great lengths to keep it that way, even buying a framed picture of a woman for his nightstand. Friends would ask who she was and he would make up a name. But, he said jokingly, they could not understand why he had films like “Beaches,” “Terms of Endearment,” and “Joy Luck Club” on his shelf.

Alva said he finally came out when Texas, his home state, passed a constitutional amendment banning same-sex marriage. He said he did not think the negative rhetoric surrounding the issue applied to him. “I turned a cheek and said that does not apply to me, but I was wrong.”

Later, as he heard others refer to “those people” as diseased and promiscuous, “it started to eat me up, because it’s like, ‘They’re talking about you, Eric,’” he said. With that, in 2006, Alva decided to do something. He called the Human Rights Campaign (HRC). Its leaders wanted him to work with Congress, including Massachusetts Rep. Martin Meehan, who introduced the Military Readiness Enhancement Act, designed to repeal Don’t Ask, Don’t Tell.

Alva said it was his military oath that made him decide to testify before Congress. “At 19, when I took that oath to defend this country against all enemies foreign and domestic, it meant every single walk of life. That meant every individual, whether male or female, young or old, whether gay or straight, whether black or white, whether Hispanic, whether able-bodied, disabled. … Those rights don’t belong to just the selected few,” he said.

Americans must move past irrational fears, Alva said. “We’re seeing change and it’s for the better good of society, the better good of furthering our ability to intersect with each other and to make sure that people are treated with dignity.” As for the next steps, he said, “I think it’s great to have these sessions, it’s wonderful for people to uncover, to share their experiences. The more we tell these stories, the more we learn about each other, the more tolerant we become.

“We need to change hearts and minds,” he concluded.

Following the talk, Cammi Valdez, assistant director in the Harvard College Office of Undergraduate Research and Fellowships, said Alva “did a phenomenal job of showing how intersectionality has been important in his career and ways that his narrative and perspective has made a difference in policy. I left this FAS Diversity Dialogue feeling inspired and ready to insert intersectionality into the forefront of my work.”

Chris Serwacki, assistant director of University-wide Alumni Engagement and Events, Harvard Alumni Association, added, “Eric Alva was a wonderful capstone to a year of intersectionality. His inspirational tale of overcoming tragedy, accepting his disability and himself, and using these to help challenge and change the laws for the LGTBQ community in the military really spoke to me, and many others in attendance.”

The Diversity Dialogue was offered in partnership by the FAS Dean’s Office, FAS Human Resources, and the FAS Office of Diversity Relations and Communications.