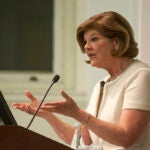 Reporting live from the front lines of history

On the morning of Aug. 20, 1965, the fates of Ruby Sales, a 17-year-old black activist from Georgia, and Jonathan Daniels, a white Episcopalian seminarian from New Hampshire, crossed in the struggle against segregation in the South.

That day, Daniels gave his life to save Sales’ when he stepped in front of a white man who pointed his gun at her. Despite Sales’ testimony, the man who killed Daniels was acquitted by an all-white jury after claiming self-defense.

Sales went on to become a theologian and a civil rights legend. Her contributions as a member of the Freedom Movement are highlighted in the National Museum of African American History and Culture’s Civil Rights History Project. She has continued her work at the helm of The SpiritHouse Project, which she founded in Atlanta to bring people together to fight for social and racial justice.

Sales will speak Monday at the 4 p.m. at the Divinity School. The event will also be live-streamed. The Gazette interviewed her about her life and activism.

GAZETTE: You were born in Alabama but grew up in Columbus, Georgia. What was it like to grow up in the heart of segregation?

SALES: Blacks couldn’t use public services or facilities, and we had to ride on the back of the bus. There were simple things like not being able to reach into the ice cream box and get your own ice cream, not being able to try on clothes in clothing stores, and being relegated to certain sections of department stores. There were signs everywhere that this was a white supremacist culture. In addition to that, there were lynchings like that of Emmett Till and other black people, so there were constant signs of white violence and terrorism throughout communities in the South, and Columbus, Georgia, was not unique. But even if in these places there was segregation, or what I call Southern apartheid, there were two cultures running simultaneously. One culture was white supremacist that was filled with white terrorism and laws of containment and surveillance against African-Americans. At the same time, there was a counterculture of resistance and accommodation by African-Americans, who created cultural and spiritual modalities that allowed us to survive, resist, and thrive without becoming broken wingers.

GAZETTE: Where did your views about social and racial justice come from?

SALES: Even within Southern apartheid, my family had certain privileges that the average black person did not enjoy, based on my father’s economic security from being in the military, where he was not beholden to a white power structure for his income.

As a child, I was not deeply conscious of the constraints of segregation because our parents were spiritual and cultural geniuses who made the arid soil of segregation fertile with hope, aspiration, creativity, and intellectual scrutiny. And so I did not grow up feeling the weight of segregation on my back. It was only when I went to Tuskegee and began to read and talk about segregation that I began to understand more.

GAZETTE: You were a student at Tuskegee University when you decided to join the Civil Rights Movement. What was the turning point for you?

SALES: At a very subconscious level, what led me to the movement had been developing in my household. My father was a person who talked about the contradictions between him, as an adult in the Army, fighting for democracy abroad when he couldn’t exercise the prerogatives of democracy at home. He would go on what we would call a historical lesson and we would roll our eyes at him and say, “Here he goes again.” And that stuff gets to you despite your resistance, and then, years later, everything he said is confirmed in the classroom by the teacher you respect, and you go, “Oh, my God.” A light bulb goes off, and you say, “Wow, Daddy was right.” It is also important to understand that we were not fighting for privileges; we were fighting for rights that white people denied black people in the South.

GAZETTE: You were 17 when you were arrested after a demonstration in Alabama and you spent a week in jail before the horrible incident in which Jonathan Daniels was killed. What went through your mind when you were in jail?

SALES: We were worried about being tortured and raped. Of all the people in jail, we were four women, and no one was over the age of 18. Jonathan Daniels was also in jail. The circumstances were horrific and frightening to a woman alone in the South in the face of history of white male rape against black women for nearly 400 years. It was a terrifying experience and we gained strength from the protest songs and the spirituals we sang. The jail had been a site of terror, shame, and torture for black people, but we turned it into a badge of honor and resistance. We showed that we were willing to go to jail and face up to rape and torture for freedom. We also showed that black mothers throughout the South had fear, but set aside their fear for the good of the community. My mother knew the terrors of white supremacy, but she said to me, “If not my child, whose child?” Black mothers supported the movement with a tear in one eye and a brown bag with food in one hand. That’s the part of the story that never gets told.

GAZETTE: Jonathan Daniels was killed by a white man who wanted to kill you. How did it affect your life?

SALES: I had always had a steady preoccupation for social justice, but Jonathan Daniels’ assassination and the fact that he saved my life intensified my passion for freedom. But I didn’t carry his death as a burden of guilt or as a weight. I carried it as a commitment. Nor did it make me bitter, because how I could be bitter in the midst of such generosity with someone who saved my life? I was glad that I met Jonathan, and other people in the movement, because it helped me understand that white people are not one-dimensional, that they are also constrained by the system of white supremacy. Jonathan Daniels thought that part of his journey was to redeem the soul of white America because he understood that racism was not something that simply happened to black people. It also happened to white people because it contained them in isolated communities where they lived in fear, so his journey south was not only an attempt to understand and connect with the humanity of others — it was also to connect with his own humanity.

GAZETTE: Has the country made progress with respect to race relations?

SALES: I don’t like to talk about race relations because that is a benign word. We have to talk about systemic oppression, we have to go beyond talking about having a good relationship with a white or black person because the goal in a struggle for human dignity and the right to live in a society unencumbered by militarism, racism, and materialism should be more than that.

GAZETTE: In your opinion, how has the country has dealt with the legacy of slavery?

SALES: I don’t think the county has dealt with the legacy of rape, genocide, land theft, captivity, slave codes, segregation, and all its policy of racial containment. While I’m an African-American person, I first and foremost begin the story by looking at the genocide and the land theft from our indigenous brother and sisters. That’s where we should begin the conversation. Because when people say, “America has always been great,” I’d say that there have been strands of greatness in America, but great is an absolute term that does not comply with the realities of our history. What’s often been white people’s greatness has been black people’s nightmare.

SALES: Black Lives Matter represents a valid cry of black people all the way from captivity to enslavement to migration to Southern apartheid. It is valid to say “black lives matter” in a society that objectifies and dehumanizes black lives, and said that we did not matter, that we were property, that we were objects of white people’s desires.

GAZETTE: And finally, what do you hope to accomplish with your work at SpiritHouse Project?

SALES: I’m not going to walk 50 miles anymore in my age. I’m not going to stand in the rain for more than a second because I don’t want to get pneumonia. I see myself as a teacher. My greatest strength is the accumulated knowledge I’ve gained over the years, which allows me to point out things to people, from which we all can learn. So when people say that racism is not an American value, referring to Donald Trump and his racism, I’m able to go back in time and show them that not only is it part of the American value system, but it is also part of our history.

But even in the face of challenges, there are reasons for hope. Freedom must be seen as a constant struggle. We don’t have to give in to despair. The reading of history should give us hope because as Martin Luther King Jr. said, “No lie can last forever,” and, “The arc of the moral universe is long, but it bends towards justice.”