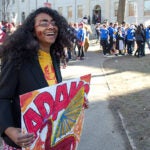 Stopping time, or at least slowing it down, may be the key to staying abreast of research on the ever-changing world of technology and the impact it has on children.

“For the last 50 years or so a new force we have to deal with — media and technology — reaches right into the home, right into the family, right into the community, and that affects how kids think about their place in the world and how they’re going to develop,” Joe Blatt, a senior lecturer at the Harvard Graduate School of Education, told an audience of nearly 50 parents, teachers, and area residents at the Harvard Ed Portal in Allston.

“That’s the subject I’m going to try to share with you: What children and young people do with media; what impact that media interaction has on their thinking and on their behavior; and what as both parents and citizens we might want to do about that interaction.”

In this episode, we talk to Rob Lue, the faculty director of the Harvard Ed Portal, about the Faculty Speaker Series. Later in the podcast, we are joined by Joe Blatt, a lecturer at the Graduate School of Education, who talks about his recent Ed Portal lecture about the effects of media and technology on children.

The faculty director of GSE’s Technology, Innovation, and Education program, Blatt has spent more than two decades researching the effects of media content and technology on child development, learning, and civic behavior. His talk, “Growing up in a Media World,” addressed the challenges and benefits of digital media.

Blatt divided the discussion into four categories — television, video games, movies, and social networking as they affect children from birth through the teenage years. Using a movie trailer, commercials, TV clips, and even statistics, he emphasized the importance of thoughtful interaction by making media a learning opportunity for children, and encouraging them to divide their time between devices, active play, and peers.

He said parents should not assume that a children tune out the real world when they turn on technology, and instead could use screen time an opportunity to talk to their children about what they see.

Ed Portal Faculty Director Robert Lue told the audience that Blatt has worked with major media production companies including PBS, Sesame Workshop, and Walden Media, and produced programs such as the NOVA science series and Scientific American Frontiers. He said Blatt’s studies are “highly relevant for families and are also highly relevant about how we think about what happens in the classroom.”

An open discussion at the end of the presentation gave audience members the chance to share their own experiences and concerns.

Jordan Nelsen of Allston said that she “grew up in a time when everything was still fairly analog, technology was transitioning slowly. I find it fascinating what’s available to children these days and the dangers of that as well, children basically have a lot of access to a lot of things.”

In contrast, having technology at her fingertips has been the only world 9-year-old Sarah Kohl of Brighton has known. “I actually really love technology and it’s fun to do stuff with computer programming,” she said.

“There isn’t a one-size-fits-all, especially with technology. You sometimes just don’t know what to do for your kids, and it’s OK to question and try not to feel bad if you don’t have all the answers,” said Kal Gieber, a senior interactive media developer at WGBH who watched the program with a researcher’s eye. He said that the data gathered yesterday about the media’s impact on children is nearly obsolete today.

“Children are the digital natives, there are so many different types of media, it’s in their hands, they are in their rooms, they are by themselves, it’s a scary world, there’s no doubt about it,” said Jillian Orr ’09, executive producer in children’s media at WGBH and a former student of Blatt. Orr said she took several of Blatt’s courses at Harvard, and continually draws on the lessons she learned there to guide her production work at WGBH.

So, what is the final word about kids engaging with and being affected by media?

“There is no final word on this, that’s why I like the subject so much,” said Blatt. “It just keeps changing and evolving.”

The Faculty Speaker Series at the Harvard Ed Portal brings to the public current issues and priorities that are being taught in the University’s classrooms. Next up is David Cox, assistant professor of molecular and cellular biology and computer science, who will explore “Toward an Artificial Brain” on March 14 from 6:30 to 7:30 p.m.