Life in wartime, etched in sound 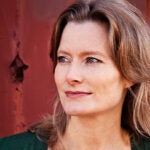 Reviving the past, one revision at a time

For Radcliffe Fellow Jeremy Eichler, music and words developed along parallel tracks. A Newton native and the Boston Globe’s classical music critic, Eichler started violin at a young age, played viola in youth orchestras, and co-founded a string quartet at Brown University, where he earned a degree in environmental studies. Separately and simultaneously, a love of writing also took hold. Eventually, the tracks of his two passions converged.

“I had enjoyed working on my writing, paying close attention to craft, and I was inspired by Alfred Kazin’s notion that the best critical writing could be thought of, in a way, as its own branch of literature,” said Eichler, who still plays violin and viola, and who went on to earn a Ph.D. in history at Columbia University. Music and writing, he said, “were separate interests for many years, but in retrospect, it was inevitable that they would come together.”

In 2003, while at Columbia, Eichler started reviewing concerts and writing features for The New York Times. When Richard Dyer, the Globe’s longtime classical music critic, stepped down in 2006, Eichler stepped in. He describes his job as not just reporting on concerts but also constantly trying to sharpen his sensibilities as a listener.

“Then,” he explains, “you try your best not only to say what happened onstage, but to convey those ineffable aspects of listening to this particular music at that time and place. I’ve always felt the best writing on music can set the air vibrating once more, as if the prose has somehow been charged by the energy of the original listening experience.”

It’s “an extreme challenge” for a writer, he added, and “one of the things that’s kept criticism an endlessly demanding pursuit.”

At Radcliffe, Eichler is at work on a fresh challenge — two books that explore the intersection between music and memory, a natural pursuit for a writer who finds that music trips the senses much like Proust’s madeleine, the tiny French cake that unleashed a rush of memory in “In Search of Lost Time.”

“On an intuitive level, many of us understand that music and memory have a very profound relationship,” said Eichler. “They both share a certain ephemerality, a knack for slipping through the fingers, and at the same time, a way of drawing us inward.”

It was midway through his graduate work that Eichler began thinking about “the kind of record that history leaves for future generations inscribed in the culture of the era.” While many historians were connecting cultural memory to literature, monuments, film, and photography, few, he realized, were probing memory’s ties to sound. Long interested in the rupture represented by the Second World War, and aware that the generation that lived through it was slipping away, Eichler was determined to investigate exactly how that particular period in time has been remembered in music.

The first of his forthcoming books grows out of his doctoral dissertation, “The Emancipation of Memory,” which received the Salo and Jeanette Baron Prize in Jewish Studies in 2015. Eichler’s thesis focused on a 1947 work by the Austrian composer Arnold Schoenberg. The seven-minute piece, “A Survivor from Warsaw,” was the first musical memorial to the Holocaust written by a major composer. Scored for narrator, men’s chorus, and orchestra, the work tells the story of a concentration camp survivor, and was shocking for its time.

Eichler goes deep into the music itself, but also uses the piece to shine light both on the life of Schoenberg, a pioneer in musical modernism who wrestled with “his own, complicated German-Jewish identity,” and on the “state of public memory in this country in those early years after the war.”

For his second book, Eichler plans to probe these themes more broadly, tracking how Enlightenment values embodied in such 19th-century works as Beethoven’s Ninth Symphony, with its iconic “Ode to Joy,” gave way to the horrors of World War II.

“How did the composers who were the custodians of this great German tradition respond as it became so grotesquely perverted and turned on its head?” he said. “And then, after the war, how did they try to reclaim the integrity of music and turn it toward the tasks of mourning and remembrance?”

Among those featured in the book will be English composer Benjamin Britten, an avowed pacifist whose large-scale “War Requiem” was written to honor the reconstructed Coventry Cathedral, which was destroyed by German bombers during World War II, and Richard Strauss, whose “Metamorphosen” many have heard as a memorial to the destruction of German culture during the war. Eichler also plans to address the very different memories of the war as it was experienced in Russia by the composer Dmitri Shostakovich, whose 13th Symphony is subtitled “Babi Yar,” after the site of one of the most brutal Nazi massacres in Ukraine.

How the story of the war was told in different countries deeply affected how musical memorials were received, he says.

After Shostakovich chose to set the Yevgeny Yevtushenko poem “Babi Yar” to music, he ran into trouble with Soviet censors for having “particularized the victims of this massacre as Jews,” said Eichler. “The party at that point wanted to shape the national narrative of commemoration in a very different way. They wanted it to be about Soviet loss and not about Jewish loss, so they forced the artists after the premiere to either change the text or watch the work disappear.”

Unraveling such complex histories takes time and focus, something Eichler has found at Radcliffe, a “writer’s utopia” where he can reflect, research, and write without the pressure of daily deadlines.

Harvard’s resources have been key to his research. He has been working with a team of four Harvard undergraduates — Radcliffe Research Partners — who comb newspaper databases, track down materials from archives overseas, and help him cast a wide net over his subject. Books from the Widener and Loeb Music libraries line the shelves and cover the desk in his Byerly Hall office. And he has spent many hours in Houghton Library, which holds the papers of Kurt Frederick, the conductor who gave the world premiere of “A Survivor from Warsaw.”

“For the student of music and memory,” said Eichler, Harvard’s resources “are an amazing treasure in one’s own backyard.”

Eichler’s talk, “War and the Soundscapes of Memory,” is at 4:15 p.m. Tuesday at the Knafel Center.