Emily Dickinson, on the screen 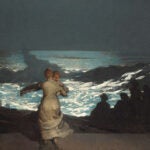 Terence Davies comes to the Harvard Film Archive Monday for a screening of “A Quiet Passion,” his new biopic on Emily Dickinson.

The 71-year-old British screenwriter and director, a careful craftsman himself, has long harbored great affection for Dickinson. He will discuss her artistry, her reclusive personality, and his film, which stars Cynthia Nixon, during a conversation with Leslie A. Morris, Houghton Library’s curator of modern books and manuscripts.

The Dickinson Collection at Houghton includes a second-floor room that showcases the Amherst poet’s furniture (including her writing table), family portraits (including one of only two lifetime images of her), and part of the family library. Digitized versions of her handwritten poems and letters, as well as facsimiles of her herbarium, are accessible online.

To preview the evening, Davies talked with The Gazette about his challenges in making movies, his artistic kinship with Dickinson, and what drew him to her deeply internal, isolated life.

GAZETTE: How did you decide to tell Emily Dickinson’s story?

DAVIES: Many years ago, I saw a documentary on the local television when I lived in the Northwest on Emily Dickinson and, of course, I couldn’t stop watching. I had read a little anthology 10 or 12 years ago, and I wanted to know more about her life. I’ve since read six biographies about her, and I just thought it was an extraordinary life. She didn’t go anywhere, but she produced 1,800 poems and had this rich life and close family dynamic. That was fascinating.

She only went away once — to Mount Holyoke College when she was 17. She was so homesick she never went anywhere again. If you drive by car (from Amherst to South Hadley), it’s not very far, but if you go by horse and carriage, it is. Once she came back home, she never left it again.

GAZETTE: You mentioned reading six biographies before writing the script. How did you prioritize the various parts of her personality and life?

DAVIES: I empathized with her in many ways. When I was in primary school (ages 5-11), I was sent away to North Wales to convalesce from a severe chest infection, and it seemed a long way away, despite not being that far, geographically, from Liverpool. I was so homesick. I responded to that part of her story. What was more important, I think, was her attitude to her natural soul. I was raised very Catholic. From ages 15 to 22, I had a great deal of spiritual crisis. We were taught if you didn’t believe, that was the way of the devil. I was and am now an atheist. I’m also the youngest of 10 children. We were very close, and I wanted our family to never change. I wanted it to stay like that forever.

GAZETTE: How do you amplify a “quiet” life?

DAVIES: I dramatized things that were in the house, things that caused a huge, ethical schism. Dickinson’s brother, Austin, had an affair with a married woman. She couldn’t forgive him for that. When small things become huge, it strips everything down. In a musical sense, I wasn’t writing a symphony. It was a string quartet. The family was rich with those wonders and terrors. The classical Greek drama is basically about families. It’s a constant source of richness and drama and fun as well.

There was humor too. I didn’t want it to be solemn. She liked growing flowers, playing piano. She was very strong. She was fun, but also a rebel. As they were very well-educated, these women, the conversation had to be intelligent and very funny. When I was growing up, my sisters’ friends would come to do their makeup at our house. I can still smell it. My sisters’ friends were wonderful, and people like that you long to come often.

GAZETTE: People are protective of her in a lot of ways, and she has an intense fan base. Were you worried about that while making the film?

DAVIES: When we went to Amherst to look at Emily Dickinson’s homestead, I met Jane Wald, the executive director, and three or four academics working there. I said, “My view in the film is only my subjective view of her life. There’s no way we can include volumes of letters. It’s going to be seen through my prism.” As an example, though she had Bright’s (kidney) disease, she died of heart failure. I thought it was more compelling that she died of kidney disease, which is how it unfolds in the film. They said, “I think she’s in safe hands.”

GAZETTE: What is your next project?

DAVIES: I’m working on “Mother of Sorrows” (a 2005 coming-of-age work of fiction about two brothers) by Richard McCann. The book was sent to me out of the blue. I loved it. The script is written, and we’re trying to raise the money.

GAZETTE: You have been a filmmaker for 40 years. What is the challenge of making movies at this point in your career?

DAVIES: The challenges are always the same, trying to get money for subjects that aren’t mainstream. Can you get a big name (actor)? Names are good, but what if they aren’t very good? If someone is right for the role, whether they are known or unknown, the amount you need to raise becomes a lot less. I’ve never been very lucky with weather. When Emily died, it was high summer. When we wanted to film, it was a gray day. I longed for it to be brilliant sunshine. We didn’t have that kind of money. The wonderful thing is that good actors do wonderful things, and I make sure every script has everything in it. They open their hearts to you, and you to them.

This interview has been condensed.