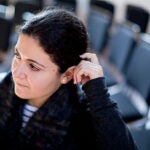 “You have two minutes. Say whatever you want to say.”

That was the simple directive that organizers of the Democratic National Convention gave last July to a quiet, bespectacled lawyer whose middle son, a decorated Army captain, had been killed in combat during the Iraq War.

Counseled by friends and colleagues to protect his family’s privacy and his own professional reputation by staying out of the election spotlight’s glare, the lawyer, a Muslim immigrant from Pakistan, said at first he was inclined to turn down the speaking offer. What changed his mind was a handwritten card from a worried little girl named Sofia, who asked whether Donald Trump could force her to leave the country if he got elected.

“It is that that makes me stand in front of you,” said an emotional Khizr Khan, LL.M. ’86, who stayed standing Wednesday evening throughout an impassioned talk at the Harvard Kennedy School. He stood, he said, to honor the civil rights leaders who sacrificed so much to protect American liberties, including free speech. “I’m a humble, private person,” Khan said. “This task that I have taken up [and] made mine has become more important because we are faced right now with an administration without a moral compass.”

Khan’s electrifying convention speech, in which he chastised Trump’s call for a ban on Muslim immigration and questioned his understanding of the U.S. Constitution — even offering to loan him the pocket copy he pulled from his suit jacket — became an indelible, signature moment in the 2016 election, and sent publishers scurrying to meet the overnight demand for copies of the 226-year-old document.

Wednesday evening, Khan criticized the new administration, saying it has shown malice by fomenting racial and social division and advancing an anti-Muslim, anti-immigrant agenda, such as with the recent executive order to restrict immigration by residents of seven predominantly Muslim countries and suspend refugee admission to the United States.

While “saddened” at the outcome of the election, Khan said he has been hopeful and heartened since then by large and small grassroots reactions around the nation, from the massive show of unity at women’s marches and airport protests to remarks from strangers who have thanked him for speaking out or simply walked up to him and said, “’I am with you.’”

“That is an indication that the majority of this country still remembers its tradition, its values enshrined in the Constitution: pluralism, equal dignity … and equal protection of law,” he told reporters before his talk at the John F. Kennedy Jr. Forum with Intisar A. Rabb, a professor of law and director of the Islamic Legal Studies Program at Harvard Law School.

Isolating and vilifying Muslims because of the heinous actions of the ISIS terrorist organization will only strengthen such groups, not weaken them, Khan said. “A small group of criminals don’t define most Muslims,” he added. “They are criminals, they must be defeated, but defeated by joining hands, not alienating the entire society, the entire community throughout the world.”

A Conversation with Khizr Khan

Reading from his favorite part of the Constitution (Section 1 of the 14th Amendment), Khan encouraged students to first reread the Declaration of Independence, as he often does, followed by the Constitution and Bill of Rights to better understand and appreciate the United States’ essential, foundational values.

Despite living in what he called “this small, dark chapter of history of the United States,” he urged people to see it as a blessing in disguise, a golden opportunity to effectuate change in meaningful ways, just as he says he did by putting aside his fears and speaking up that night in Philadelphia. In addition, he said, do not underestimate the impact a single person can have.

“This is a crossroads. This is a historical moment. There is a challenge for all of us,” Khan said. “Have a voice. Say something. Do something” that honors America’s democratic values, and remain faithful to them.

“This dark chapter is momentary. The United States remains a beacon of hope. Its values remain a beacon of hope for the rest of the world,” he said. “Remain standing. Remain strong.”