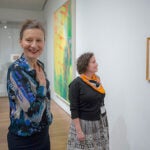 Despite being perhaps the most famous and successful American artist since the late Andy Warhol, Jeff Koons is surprisingly egalitarian about his work and its impact.

“What I try to do every day of my life is to make an object that you can’t make any judgment about,” he said during a lecture and discussion Tuesday evening in tandem with Robin Kelsey, dean of arts and humanities at Harvard’s Faculty of Arts and Sciences, and Mohsen Mostafavi, dean of Harvard’s Graduate School of Design (GSD), where the event was held.

Praised and criticized for the approachability of his work, Koons said he deeply values “acceptance” and removing the barriers that prevent many people from embracing art. It’s an impulse he said was prompted by the acute embarrassment he felt as a young art student during a visit to the Baltimore Museum of Art when he realized he didn’t know much about the masterpieces on display.

“Because art can be something which totally empowers people — you interact with it and it gives you a sense of possibility — or it can be something which disempowers you, that presents itself” as forbidding, as something for which “you have to be prepared or you can’t participate,” he said, as he recounted his techniques and fabrication choices, his philosophy, the themes, and the ideas undergirding his work with a disarming earnestness given his deep admiration for the subversive Dada master Marcel Duchamp.

Over more than three decades, Koons’ sculptures — which are often grand gestures to Middle American kitsch and bland commercialism, such as balloon animals, lawn ornaments, toys, and kitchen appliances — have often become trophies of the ultra-rich, regularly fetching some of the highest prices in the art world. In 2013, his “Balloon Dog (Orange)” sold for just over $58 million at auction, the highest price ever paid for a living artist’s work.

One early sculpture, “Nelson Automatic Cooker” (1979), is a deep fryer mounted on two fluorescent light bulbs, while another is a jumble of store-bought kitchen sponges (“Sponge Shelf,” 1978). The popular “Puppy” (1992), a 40-foot West Highland terrier made of 60,000 flowering plants, would look more at home at Disney World than in front of Frank Gehry’s soaring Guggenheim Museum in Bilbao, Spain.

Raised in suburban Pennsylvania, Koons, 62, took to art in early elementary school and continued with it through art school in Maryland and Chicago.

But it was after a chance meeting with Salvador Dali at 18 and seeing an exhibition of his in New York City that Koons says he found the confidence to join in the art world, not just observe it. “I went home that night … and I said to myself, ‘I can do this, too. I can make art a way of life.’”

Known for an exacting attention to detail that often translates into years between finished pieces, Koons explained that his goal is not perfection, but ensuring that viewers stay lost in the works as long as possible.

“I never want them to look and feel like they’re let down, that … a certain detail wasn’t taken care of, because that breaks the abstraction,” he said. “You’re showing them a respect by being able to maintain that abstraction. It doesn’t have to do with a materialism or a fetishism going after perfection.”

Despite his superstardom, not everyone in the art world is enamored of Koons’ work, which some have called vacuous, saccharine, and even cynical.

“Koons is a recycler and regurgitator of the obvious, which he proceeds to aggrandize in the most obvious way imaginable, by producing oversized versions of cheap stuff in extremely expensive materials,” said a New York Review of Books critic in 2014 when the Whitney Museum mounted a blockbuster Koons retrospective.

Roberta Smith, art critic for the New York Times, described his relentlessly soothing patter about art as a metaphysical vehicle for self-actualization as “slightly nonsensical Koonspeak that casts him as the truest believer in a cult of his own invention.”

Where Koons clearly sees his own life experiences, gender, and sexuality, as well as the history of Western art from the Italian Renaissance to Dali, running thematically through his work, he acknowledges that not everyone does and that he feels “hurt” when “somebody says, ‘Oh, Koons’ work is crap.’”

“I do feel responsible to take the viewer, somebody interacting with a piece, to a certain vista [as I try] to communicate to them what my intentions are for the perceptions that they should be experiencing. But then, at a certain point, the viewer finishes the work,” he said. “Where the art happens is inside the viewer.”

“The object, when you confront it, is only a transponder,” Koons later added. “It’s only something to excite you about your own human potential. At the end, that’s what I care about.”