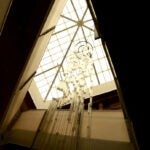 In a trio of studies published earlier this month, researchers at the Energy Frontier Research Center’s (EFRC) Integrated Mesoscale Architectures for Sustainable Catalysis (IMASC) at Harvard have shown that the process of catalysis is more dynamic than previously imagined, and that molecular forces can vastly influence the process.

The first, published in Nature Materials, showed that contrary to the way the process was long believed to happen, catalysts are capable of restructuring their surfaces during reactions, and then returning to their normal state.

Catalysts have been a fundamental part of modern industrial processes for more than a century, but the development of new catalysts to speed up chemical processes has remained inconsistent.

To more fully understand precisely how the catalysts work, and to aid in the development of new catalytic materials, Cynthia Friend, director of IMASC, the Theodore William Richards Professor of Chemistry and Professor of Materials Science, and colleagues from the Lawrence Berkley (LBNL), Brookhaven (BNL), and Lawrence Livermore (LLNL) national laboratories set out to observe the process of catalysis as it happens.

Cutting-edge scientific tools yielded images of the atoms in the material and monitored how the composition of the catalyst surface changes. Microscopy facilities at the Center for Functional Nanomaterials at Brookhaven and the Advanced Light Source at Berkeley were essential for these experiments.

Two additional studies — one described in Nature Communications and the other in the Journal of the American Chemical Society (JACS) — detail a second discovery, that previously ignored molecular forces have a significant effect on how compounds react during catalysis.

Taken together, the discoveries represent an entirely new understanding of how catalysis takes place, and offer a possible roadmap for the design and development of a new generation of energy-efficient catalysts for a host of industrial processes.

Conducted in collaboration with colleagues at several national laboratories and other partnering institutions, researchers at the DOE-funded IMASC are combining tightly controlled experimental conditions and computational tools to develop new methods for developing catalysts and new ways to understand the process of catalysis.

“This is really a paradigm shift in catalyst discovery,” Friend said. “For 100 years or more, this was a trial-and-error process. In recent years, people are striving for a more systematic approach. Our center, through synergistic collaboration between the investigators from the partnering institutions, is establishing new principles for understanding catalytic reactions under very tightly controlled conditions, with computational modeling. These principles are used to develop catalysts that work under real-world conditions.”

Nearly one-third of the world’s energy is devoted to the chemical industry, said Challa S.S.R. Kumar, the program’s managing director, so finding ways to make those processes more efficient — either by speeding them up or allowing them to take place at lower temperatures — could make for a significant environmental impact.

“Our goal has been to develop a new paradigm for catalyst discovery,” said Kumar. “We can now say we have new design principles that have never been thought about before in catalysis.”

“This is a critical discovery in catalysis, because so far, the mindset has been to simply design a catalyst’s surface,” she said. “But what we’re saying is you need to go a step further and … take that dynamic nature into consideration when designing a catalyst.

“We want to make sure they’re reacting to yield the desired product,” she continued. “So selectivity is key, and what we have shown is that the dynamic restructuring that occurs when catalysis happens is critical to controlling the selectivity and activity.”

Understanding how catalysts behave, however, may be only one part of the picture.

As described in Nature Communications and JACS, researchers found evidence that tiny molecular forces which long had been ignored play a critical role in why different molecules react differently during catalysis.

“What we are now seeing is that these forces called van der Waals forces … even though they’re tiny, they contribute to controlling the activity and selectivity of the reaction,” Friend said. “So now we can understand why we see reactivity differences between closely related compounds.”

Though researchers have only demonstrated the discoveries in nanoporous gold catalysts, the next goal, Kumar said, is to expand the research into other materials.

“This is a whole new way of looking at things,” he said. “We have demonstrated these design principles in one case, but our goal is to develop and design catalysts and methods for catalyst design that can be widely applied. We want to be generally applicable to a variety of catalysts and catalytic reactions.”

The funding for the Harvard EFRC center, IMASC, with collaborating partners from LLNL, LBNL, Tufts University, and BNL, comes from the U.S. Department of Energy, Office of Science, Basic Energy Sciences under award No. DESC0012573.