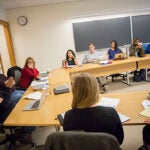 Hard time gets a hard look

Based on the campaign and transition so far, Harvard government professors probe expected areas of administration focus next year

When it comes to the 2016 election, it’s time to say: So, that happened. While it will take years for historians and political scientists to fully digest and understand the tumultuous campaign, the immediate question people want answered is, what’s next for the country?

Faculty from Harvard’s Government Department gathered Tuesday to consider some of the underlying dynamics at play in the election and what the administration of Donald Trump will portend for voting rights, foreign policy, economics, American democracy, and scholarship at institutions such as Harvard.

“This electoral process has been a triumph of group tribalism, emotion, [and] passion at the expense of, or instead of, or over … ideology, policy disputes, rationality, the role of facts/information/analysis, [and] fact-based debate,” said Jennifer Hochschild, the H.L. Jayne Professor of Government, who moderated the panel.

While it’s far too reductive to say the election was about feelings over facts, “What worries me … is there was an implicit, and sometimes explicit, encouragement of fear, of resentment, of ‘hunkering down,’” she said. Trump and his campaign allowed and legitimized the rejection of tenets such as tolerance and balance and instead stoked class conflict and resentment, religious and racial hostility, and xenophobia that will be “very damaging” to American politics and the country as a whole if he continues in that vein during his presidency.

“He’s remarkably successful at casting isolationism, bigotry, sexism, [and] nativism as expressions of working-class empowerment and in using that to galvanize his base of supporters,” noted Claudine Gay, dean of Social Science and Wilbur A. Cowett Professor of Government and of African and African-American Studies, who discussed the impact Trump’s administration may have on voting rights.

While it’s difficult to predict where issues are headed given Trump’s shifting stances, the need to govern now rather than campaign, and the lack of policy discussion on both sides during the election, Gay expects the trend in Republican-led states toward imposing more hurdles and restrictions on voting rights “will only accelerate” under Trump. He will likely get to select multiple seats on the Supreme Court and will oversee a Department of Justice that will be less active in monitoring voting restrictions and more focused on allegations of voter fraud, Gay said.

Trump’s mercurial style has upended a number of political and democratic norms, including expectations about the relationship between words and deeds.

“One of Trump’s basic methodologies is to sow uncertainty with words that go in all directions and mean nothing,” said Danielle Allen, director of Harvard’s Edmond J. Safra Center for Ethics and the recently named James Bryant Conant University Professor. “It’s very disabling of our capacity as scholars” and as citizens, because if one ignores Trump’s words and focuses solely on his actions, one is left constantly reacting to events.

Instead, scholars will need to try to “game out” in advance what policy directions Trump could take and then evaluate and prepare for where those paths might lead the country.

Paranoia and conspiracy theorizing, which have a long tradition in American politics, reared their heads again in 2016 in powerful ways that can undermine democratic norms and institutions, said Eric Nelson, the Robert M. Beren Professor of Government.

A large segment of the electorate was driven by suspicion of political and economic elites and subscribed to such claims as “climate change is a hoax.”

“It’s the ‘hoax’ part that’s important. To call it a hoax doesn’t mean that it’s just factually untrue; it’s that there’s a design by some faceless set of elites that has been set afoot to bamboozle people into agreeing to things that are not in their interests on some spurious pretext,” said Nelson.

Questioning the veracity of a person’s expressed motive makes his or her arguments hard to refute, because any contrary evidence he or she presents is simply discounted.

“A view that there’s a design, a plot by elites to undo our values, our way of life, to impoverish us, that the system is rigged to take away what matters to us, to criminalize Christianity, and so on, and that the major tool that this ‘cabal of elites’ — including, of course, everyone in this room — has at our effective disposal is a toxic, intolerant form of political correctness that’s used as a cudgel to suppress dissent.”

Nelson suggested that students think about “the ways in which we are, on this campus and at related institutions, helping our opponents to caricature us,” through debates over symbolic but often small-bore social and cultural issues that get relentless, overblown attention in the right-wing media.

“It’s Christmas morning for Donald Trump every time one of these things happen,” he said.

Trump’s election revealed significant public disinterest in policy and “eroded commitments to the truth, eroded the capacity of people to argue on the basis of evidence, and also diminished our capacity as scholars to be teachers for a general public,” Allen said. It also damaged the authority and credibility of places like Harvard. “So we have a job to do to rebuild that authority and to rebuild the frameworks necessary for credibility around arguments about evidence and truth and so forth.”

To do that and to preserve the University’s mission of veritas, Allen said, it’s essential that Harvard, and its community, not play into right-wing stereotypes about universities and resist “the temptation to become overly politicized as an institution.”

Despite the incoming administration’s possible authoritarian tendencies, Professor Steven Levitsky, who studies authoritarian governments and politics, said he’s “not too worried” that American democracy is in imminent danger because of the strength of the U.S. Constitution.

“But one thing I learned studying Latin America is that even a very well-designed constitution is not enough to ensure stable democracy,” he said. 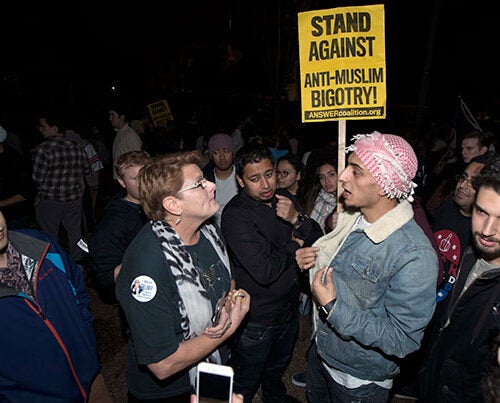 In polarized post-election U.S., coming together seems a distant, but no less necessary, dream

“In all successful democracies, constitutional rules are invariably reinforced by informal democratic norms, unwritten rules of the game that ensure a minimum of civility and cooperation. And these informal norms serve essentially as a soft guardrail that prevents political competition from spiraling into a partisan war to the death.”

Unfortunately, political norms such as self-restraint, cooperation, and fair play have eroded over the last 20 years, starting with the House impeachment of President Bill Clinton and continuing through the unprecedented obstruction of President Obama’s nomination of Judge Merrick Garland to the Supreme Court, said Levitsky.

Today, the greatest threat to democracy is delegitimizing opposition, he said. “In any stable democracy, it is essential that major parties accept one another’s legitimacy — their right to exist, their right to compete, their right to govern,” he said. Mainstream politicians have to close ranks and isolate fringe elements and others who seek to move away from that concept.

“Democracies get into trouble when that mutual acceptance disappears. When we view our partisan rivals as disloyal, as un-American, as a threat to our security, as a threat to our way of life, then we can begin to justify extraordinary measures against them,” he said. “And that is the road to authoritarian politics.”

Other speakers included Stephen Rosen, the Beton Michael Kaneb Professor of National Security and Military Affairs, who discussed the foreign policy implications of a Trump administration, and Professor Jeffry Frieden, who talked about its effects on economic policy both domestically and abroad. Frieden worried particularly about the prospect of massive deficits ahead.