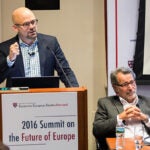 In polarized post-election U.S., coming together seems a distant, but no less necessary, dream

A pilot on a recent United Airlines flight from San Francisco to Puerto Vallarta, Mexico, had to play peacemaker when a political fight erupted aboard his plane.

A young mother who snapped a post-election selfie with Hillary Clinton said she received death threats when her picture went viral.

Protestors spray-painted: “Your vote was a hate crime” on the Jefferson Davis Monument in Richmond, Va.

In the wake of one of the most divisive elections in history, political polarization in the U.S. appears to be at an all-time high. The rift between blue states and red states is well documented, but analysts increasingly point to widening conflict within those states, divides that often run along ethnic, economic, and racial lines.

So how do we reach out and move forward in a country that seems to have been ripped in two? It’s going to be tough and it’s going to take time, according to a group of Harvard scholars who offered their thoughts on how to push past the partisanship.

“The question is whether this election and the profound mutual inability of Trump and Clinton supporters to understand one another — their tendency to see one another as something close to deranged — extends all the way down to social and neighbor relations,” said Nancy Rosenblum, Harvard’s Senator Joseph S. Clark Professor of Ethics in Politics and Government emerita.

Rosenblum’s most recent book, “Good Neighbors: The Democracy of Everyday Life in America,” explores how relations between neighbors help establish an important framework for civil society. In today’s climate, such interactions, she said, may be the key to helping people look beyond their disagreements and distrust.

“The hope is that personally and individually, where we work and live, we can disregard if not helpfully confront these differences and exhibit the reciprocity that is normal among colleagues and neighbors. The ethic of good neighbors is deeply rooted here and the democracy of everyday life is, I believe, a saving remnant in politically dark and dangerous times.”

One challenge is that so many communities are becoming uniform in how they look and think, a trend captured in 2009’s “The Big Sort: Why the Clustering of Like-Minded America is Tearing Us Apart,” in which journalist Bill Bishop suggested increasingly homogeneous cities and neighborhoods threaten democracy.

“[The book] does a terrific job of outlining how housing patterns, redistricting, and economic shifts have divided America up into ideologically separate communities,” said Danielle Allen, a political philosopher and director of Harvard’s Edmond J. Safra Center for Ethics. “That intersects with how our political institutions operate by affecting how politicians campaign, who gets elected, and how they live and interact with their fellow politicians in Washington.”

Joshua Greene, a Harvard professor of psychology and author of “Moral Tribes: Emotion, Reason, and the Gap Between Us and Them,” said that we are least open to outside influence when we feel threatened. He suggested an improved economic outlook could help ease some of that fear and set the stage for constructive dialogue.

“My hope is that [President-elect Donald] Trump, with some Democratic allies, can make good on some of his campaign promises to put people to work rebuilding infrastructure. A bipartisan win on that issue could pave the way for better intertribal communication.”

Stronger consensus on fact and fiction wouldn’t hurt, either. In the wake of the Brexit vote and the U.S. election, the Oxford English Dictionary chose “post-truth” as the word of the year. The dictionary defines the adjective as “relating to or denoting circumstances in which objective facts are less influential in shaping public opinion than appeals to emotion and personal belief.”

The term underscores the sense that an ability to agree on basic facts no longer seems important for millions of Americans, and defines an uncomfortable post-election dynamic that has left people wondering how to even begin a conversation with the other side.

“It’s hard to imagine a well-functioning democracy in which people are operating with fundamentally different facts,” said Greene. “There are people who speak both fluent red and blue. I think we’re going to need to find those people and encourage them to serve as cultural bridges.”

Said Allen: “Start from the facts you do agree on and build out from there.

“We haven’t reached the point where there is literally nothing we agree about,” Allen, the author of “Talking to Strangers: Anxieties of Citizenship Since Brown v. Board of Education,” continued. “We still agree that the sun rises in the East, for instance. Perhaps it’s time to start figuring out what else we do in fact agree on before we get back to litigating the stuff we don’t agree on.

“I would suggest that we also agree, for instance, that our judicial institutions should act with disinterestedness and impartiality. Could we perhaps make that a common project and first priority as a way of rebuilding our capacity to work together?”

Allen and Nicco Mele, director of the Shorenstein Center on Media, Politics, and Public Policy, agree that the loss of countless local newspapers has contributed to the growing divide in the country, in part by leaving national news outlets such as The New York Times, The Wall Street Journal, and The Washington Post “without a network of insider informants to help them understand the ‘fly-over’ areas of the country,” said Allen.

Through local journalism “we come to know our neighbors in our communities,” said Mele. Absent those connections, he added, “We get drawn into more sensationalistic, more national stories that may distort the realities of our own experiences in communities.”

Mele also thinks more attention needs to be paid to high-tech companies whose reliance on algorithms has given news-making power to fake news.

“I do believe we have to have some discussion and some ways of holding algorithms accountable,” he said. “Algorithms are a form of power and they come with bias. And so giving some consideration to how we can hold that power accountable and we can identify bias is worthwhile.”

While open conversation among neighbors with differing points of view is critical, equally so are structural and political reforms to expose lawmakers to a wider range of perspectives, said Allen.

“Redistricting processes have given us too many districts that lean heavily one way or another and have insufficient political contestation. This means less exposure for incumbents to the views of the other side. And the military now recruits far more successfully from red than from blue states, so the military too is losing connections to half of the country. Geographic diversity has to be among the things that the institutions structuring our professional sectors self-consciously seek.

“Broad, cross-party coalitions that revisit our approaches to redistricting, housing, education, transportation,” are crucial to progress, Allen added. “These are the zones of policy that affect how connected or disconnected we are as a society.”