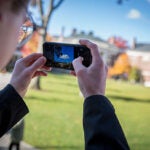 Storytelling has been a part of Brynn Elliott’s identity since she was a child, when she made up interpretive dances around her house and directed plays with her family’s nativity set. Coming to Harvard was an extension of that narrative.

“I wanted to research songs,” said Elliott ’18, who started guitar at 16 and performs with a self-titled band. “I have written very personal songs, but the songs I’m most proud of are rooted in a deeper tradition than my own life.”

The scholar-rocker got serious about music a year before arriving in Cambridge. In 2013, her name on Harvard’s wait list, Elliott left her Atlanta home to take an internship with music producer Clif Magness (Avril Lavigne, Kelly Clarkson) in Portland, Ore., recording a series of songs that included the Tolstoy-inspired “Dear Anna.”

“At that time, the music was very singer-songwriter, countryish,” she said. “Now it’s pop-rock.”

When Harvard accepted Elliott, who lives in Currier House, she brought along her guitar and a commitment to keep the band (most of whom are based in Los Angeles) going. They tour in summer, through winter break, and on some fall and spring weekends, totaling 70 concerts a year. This past summer, she released an EP titled “Jungle.”

Philosophy courses have provided much of the inspiration for Elliott’s lyrics. In “Faith and Authenticity: Existentialism and the Human Condition,” she shifts between Kierkegaard and Sartre.

“I get the artistic freedom of expression in my songwriting,” said Elliott. “It challenges me to think in a new way.”

In the spring, Alison Simmons, the Samuel H. Wolcott Professor of Philosophy, taught Elliott in “Beyond Dualism,” on 17th-century female philosophers, and found a student “constantly thinking through how the ideas and especially the ideas of people from history might help her make sense of her own experience, which, in turn, helps her communicate through her music.”

“Her education is part of her art making,” Simmons said. “We’ve talked a good deal about her career. Some would like her to leave school to pursue her music full-time. But that would be like saying to Jimmy Page, ‘Unplug your electric guitar and we’ll go on the road without your power source.’ Thinking through complex — and even some bizarre — ideas in class is Brynn’s power source. Maybe when she wins an award Descartes will get a shout-out.” 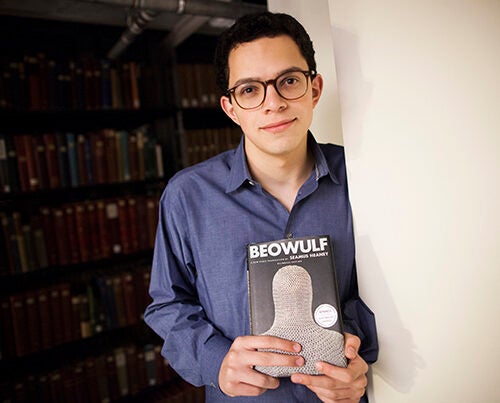 Carving out a music career while keeping up with her philosophy studies might seem like an identity split, but Elliott feels deeply rooted in both.

“Pop music has lost its humanism,” she said. “There’s this whole sterility. If there’s not a human connection in that, it’s just going to be a fad. I’ll write songs that have a techno flair, but that are rooted in a tradition because it’s connected with people.”

She’s the only student in a band of full-time musicians, which allows her to “be connected with people on stage, making sounds that primarily are not electronic.” Those collaborations, as well as the connections she’s made in the classroom, have been critical for Elliott, who came to Harvard having been homeschooled all of her life.

“I didn’t have people I was learning with,” she said. “It sounds cliché, but not having exposure to other perspectives — what that means is that you don’t necessarily get a diverse set of opinions. Here my mind has just expanded so much, and I’ve translated that into my music.”

She recalled going as a freshman to Simmons’ office hours, wanted to discuss a disappointing grade on one of her first papers.

“I sat down and she was like: ‘How are you?’” Elliott said. “I started talking about the paper, and she said, ‘No, no, no. How are you doing?’ She was really trying to engage me. We’re all human and that’s kind of the most important thing to keep in mind when we’re writing papers, or writing music, or doing a club. That’s a big thing she’s taught me.”