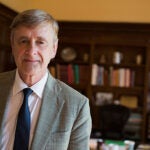 Next year, they’ll begin tracking the history of Jewish minorities in the Muslim world, trying to improve how doctors and patients communicate, exploring how computer science can aid genetics research, and mining European history from 1500 to today.

The interests of Harvard’s four newest Rhodes Scholars are diverse, but they are all looking forward to diving deep into their studies at the University of Oxford over the next two years.

The four, Spencer Dunleavy ’17, Nancy Ko ’17, Maia Silber ’17, and Anthony Wilder Wohns ’16, were among the 32 American students named as Rhodes recipients on Sunday. Considered the most prestigious academic awards in the world, the scholarships cover the full cost of two or three years’ study at Oxford. Including this year’s winners, Harvard has produced 359 Rhodes Scholars.

The Gazette interviewed all four to find out how they plan to spend their Oxford years:

Spencer Dunleavy: “Didn’t even know what Oxford was”

A chemistry concentrator, Dunleavy plans to complete two one-year master’s programs, one in education and a second in primary care research, with the goal of improving how doctors communicate with patients, particularly those from lower income brackets.

“My plan is to use the skills from those two programs to assess how doctors educate patients, particularly people from backgrounds that are typically underserved by the medical community,” Dunleavy said. “There is evidence that many doctors don’t even ask patients, ‘Does that make sense?’ or ‘Do you understand?’ Understanding how they can use health literacy can not only improve their understanding, but improve their health.”

At least part of the credit for his Rhodes win, Dunleavy said, must be shared with family, friends, and the many mentors he’s had at Harvard.

“This is really a reflection of the people at the University who have supported me,” he said. “People have asked me if it was my dream to go to Oxford. I didn’t even know what Oxford was until three years ago. I didn’t really know anything about the scholarship until Dunster House Faculty Dean Roger Porter encouraged me to apply. I really wouldn’t be here without the support of everyone at Harvard and all my family and friends.”

Nancy Ko: “The world has always been paradoxical”

To Nancy Ko, history means more than studying the past. It’s a tool that can be used to fight bigotry.

“I truly believe studying history has the potential to unfix our notions of the present and expand ideas of what can be made possible,” she explains. “Especially now, when we’re seeing the politics of despair everywhere in the world, I hope to show through my research that the world has always been paradoxical and complicated, and that it is possible to build bridges.”

Ko, a resident of Kirkland House and a joint concentrator in history and Near Eastern languages and civilizations, will focus on Jewish history and modern Middle Eastern studies.

“As a Korean-American, there’s always this question of why you, why Jewish studies?” Ko said. “But growing up in one of the only Asian families in a predominantly Jewish Brooklyn neighborhood helped me identify with Jewish culture because, in that tradition, there is an awareness of what it is like to be the ‘other.’”

Indeed, sitting behind the counter at her parents’ grocery store in Brooklyn planted the seeds not only of Ko’s love of history, but also a passion for debate. A member of the Harvard Political Union and former chair of Student Discussion, she is hoping to participate in debates at the Oxford Union.

“I grew up in an environment where intellectual discourse was valued. I’d hear it in my parents’ store all the time. One thing I think Harvard and Oxford have in common is they both have a long tradition of intellectual debate.”

For now, Ko is letting it all sink in. “Mostly I feel deeply humbled. Looking at the company I’m in — not just the scholars-elect, but the other finalists — I feel so humbled and inspired. The Rhodes Trust made an investment in us as scholars to fight the world’s fight. It’ll be a long fight, but I’m revved up.”

Maia Silber: “I’ve learned so much at Harvard about … doing original research”

Maia Silber spent the weekend studying for a midterm and trying to absorb that she’d just won a Rhodes.

“I’m still in shock. I was in total denial on Saturday, and the news really only began to sink in once I saw the press release,” she said with a laugh.

Silber, who lives in Eliot House, said she is reaping the reward of a team effort.

“I feel so grateful to everyone who’s gotten me here — my parents, my tutors, and especially my mentor, Leah Price,” she said. “I’ve been fortunate to work with so many wonderful faculty members at Harvard — too many to name — who have pushed me, challenged me, and taken me under their wing. This award is a culmination of all that.”

In particular, Silber credits the History and Literature Department, her concentration, with helping her prepare for her next step: “I’ve learned so much at Harvard about using and exploring primary sources and doing original research, which I know will serve me well as a Rhodes Scholar.”

At Oxford, Silber plans to study British and European history from 1500 to the present. A self-described King “Henry VIII buff,” Silber is particularly excited to explore England over the next two years.

Before that, though, she’ll spend the summer working at The Washington Post. A dedicated Crimson reporter with a passion for investigative writing, Silber plans to be an investigative journalist after completing her Rhodes study.

Anthony Wilder Wohns: “So many advantages in research coming from this computational world”

Anthony Wilder Wohns wants to know why people look the way they do, and where they may be headed.

The Pforzheimer House resident and human evolutionary biology concentrator plans to pursue his interest in computer science at Oxford, with the goal of understanding how computational tools can help researchers parse vast amounts of genetics data.

“I’m really interested in genetics and how it applies to a variety of areas, particularly in how humans came to be the way they are,” he said. “At Harvard, I studied the evolution of limb proportions and how we came to walk upright, and now I’m interested in what genetics has to say about the future.”

Part of that future, Wohns said, will rely on computer science to make sense of genetic information.

“There are so many advantages in research coming from this computational world,” he said. “That opened up this whole new world of research for me.”

Wohns also believes his time at Harvard was critical in preparing him for his time as a Rhodes Scholar.

“I have to give so much credit to Harvard. It’s hard to put any kind of boundary on it,” he said. “I absolutely loved Harvard. I had the best mentors I could ask for. Terence Capellini [assistant professor of human evolutionary biology, and Wohns’ thesis adviser] got me passionate about genetics. I didn’t think that was a subject I wanted to go into until I studied under him. I could go on and on.”