Hard time gets a hard look

On a recent afternoon Vincent Schiraldi watched students file out of a Harvard classroom. Then he made an incisive comparison.

“If you think about it, this age cohort of 18- to 25-year-olds — what most of the people in the room are — is pretty much the entrance-age cohort for prisons, too,” said Schiraldi, who worked for years in criminal justice before arriving in Cambridge last year to head the Harvard Kennedy School’s Program in Criminal Justice Policy and Management. “There’s a real kind of fork in the road that people take in life that either sends them to prison or sends them to productive lives, and in America the vast majority of those productive lives are going to involve some level of college.”

Stats on U.S. incarceration paint a troubling picture. Prison population began a steady rise in the 1970s, peaking in 2009. The U.S. imprisons more citizens (2.2 million) than any other nation, and despite having only 5 percent of global population holds almost a quarter of the world’s prisoners. Among African-American men who don’t finish high school, almost two-thirds will spend part of their lives behind bars.

This fall, a new Harvard course has helped students become part of the effort to reform the nation’s criminal justice system. Schiraldi, Harvard Law School lecturer Nancy Gertner, and Harvard sociologist Bruce Western are teaching a graduate seminar examining the origins of U.S. mass incarceration and helping students craft workable solutions for getting, and keeping, people out of prison.

“I think there is a massive appetite for this conversation on the part of students and I worry that we are not doing enough to meet the demand for that conversation,” said Western, the Daniel and Florence Guggenheim Professor of Criminal Justice. “I think universities as institutions are only coming to this problem slowly … in some ways our students are out in front of where we should be.”

The effort aims to harness that interest and embraces the idea that such an entrenched problem as mass incarceration requires an eclectic approach, one shaped by years of experience in academia, public policy, and the courtroom.

“Each of us in different ways has been teaching and working on the problem of criminal justice policy,” said Gertner, who served as a federal judge in Massachusetts for 17 years. “We thought there would be some unique value in bringing together three perspectives: the social science on problems of crime and criminal justice, the perspective of policy research and analysis, and law.”

The course comes at a time when attitudes about criminal justice policy have begun to shift. Democrats and Republicans have united in their desire to overhaul criminal justice laws in recent years and the House Judiciary Committee is currently heading a bipartisan effort to craft a range of bills aimed at improving the system.

“None of us ever believed that we would be in a world in which people are talking about reducing incarceration and letting people out of prison,” said Gertner. During the class, she added, the instructors have ensured “the discussion goes from the abstract to the concrete.”

Course requirements include a two-page white paper outlining reform recommendations written “for a high-ranking White House or Justice Department official.” There’s a good chance key decision makers will see some of those proposals. The course’s organizers are compiling a briefing for the Trump administration with suggestions about how to reduce incarceration at the local, state, and federal levels, and they plan to include material generated by the class in their report.

Even if the new president balks or moves slowly on mass incarceration, Schiraldi said he is hopeful for reform at the state level.

“Incarceration rates plummeted in New York City under Rudy Giuliani and in New Jersey under Chris Christie, and Newt Gingrich has openly called for reducing incarceration so there’s some room for guarded optimism in this area.”

Students have engaged in a deep analysis of the history of the problem and the key changes in drug and sentencing policies that led to fivefold growth in U.S. incarceration. Class topics have included the origins of the American prison boom, the impact of race and poverty on mass incarceration, prison conditions, areas of reform involving youth and young adults, and social policy.

Keeping the human dimension in mind has been a priority.

“This was, and is, happening to real people,” said Schiraldi. “We should never forget that.”

To start their first class the instructors discussed how they became interested in the topic. 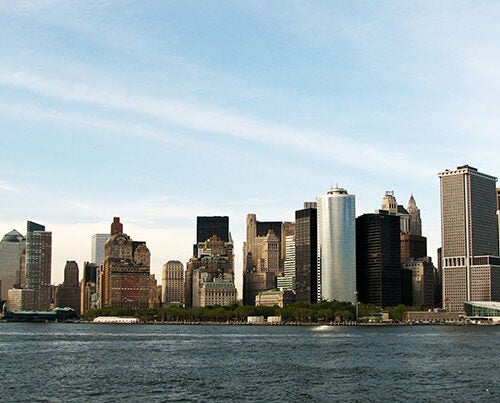 Western was at Princeton University in the mid-1990s, studying employment-to-population ratios and trying to count prisoners as part of the jobless population. A research assistant reported back that 30 percent of people in U.S. prisons were African-American men who had dropped out of high school. Convinced the numbers were wrong, Western asked that they be reviewed. He was stunned when the results came back the same.

The statistics led him to a two-decade project to “understand the penal system in American society — its place in race relations and its intimate connections to problems of poverty and social inequality.”

Gertner was simply doing her job, but she knew she was making the problem worse.

“Eighty percent of sentences that I was obliged to impose in drug cases were unjust, disproportionate, and inequitable,” she told the class of working as judge within a strict sentencing framework ushered in by the Sentencing Reform Act of 1984. After retiring in 2011, she embarked “on a trajectory of wanting to know more,” she said, and pressing for change.

As a social psychology student at Binghamton University in the late 1970s, Schiraldi worked nights at a home for juvenile offenders run by New York State. A few years later, after earning a master’s in social work from New York University, he was hired by Jerome Miller, a social worker and noted proponent of deinstitutionalizing the criminal justice system in favor of small, community-based programs. Schiraldi embraced his boss’ anti-institution stance as he watched incarceration rates soar.

They were “fierce, ugly, nasty years,” said Schiraldi, both for those who worked to try to change the system, and above all “for those who were getting incarcerated.”

Enrollment in the new seminar suggests a strong interest in the subject across campus. The course was at its 30-student capacity well before its registration deadline, with more than 100 students on waiting list. In addition to students from HKS, HLS, and the Faculty of Arts and Sciences, the class attracted interest from the Harvard Graduate School of Design, the Harvard Graduate School of Education, and Harvard Divinity School.

One student is the Law School’s Maya Cohen, who worked for the Close to Home initiative, a juvenile justice program in New York designed to keep youth close to their families and communities, when it was run by Schiraldi. Like her instructors, Cohen hopes the interdisciplinary nature of the course will help shine a light on how to end mass incarceration.

“It will take a lot of creativity and collaboration in order to shift it, transform it, get rid of it,” she said. “Bringing together smart people from across the University to focus on it in an active way is probably our best bet.”