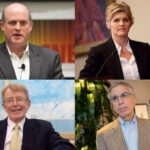 Is it possible that the cascading effects of climate change left a fingerprint on the recent U.S. elections?

That possibility was floated at a gathering of climate change experts convened to consider a warming world’s potential impact on developing nations, a discussion that reached back to the developed world. The session, held at Harvard Law School on Wednesday, brought together experts from the scientific, policy, legal, health, business, and other academic communities and was by turns urgently pessimistic and optimistic.

Participants in the session emphasized that some climate change is both unavoidable and irreversible because the carbon dioxide already released into the atmosphere will be there for thousands of years. It is imperative, they said, that the players involved lower emissions as rapidly as possible to minimize effects that will intensify as excess heat works its way through the global climate system.

“We’re building a problem today from which we can’t extract ourselves,” said James Anderson, the Philip S. Weld Professor of Atmospheric Chemistry. “It’s not about backing off carbon a bit and it [the climate system] will come back to something we recognize.”

Several participants discussed the increased likelihood of extreme weather, such as heavy rain and prolonged drought. Ashish Jha, the K.T. Li Professor of International Health and head of the Harvard Global Health Institute, said that ultimately those effects will be felt acutely on human health. Crops flooded or withered by drought mean less food for those relying on subsistence agriculture, which has the potential to reverse decades of progress in lowering mortality rates for children under 5.

Downstream effects of such food insecurity are poorly understood but potentially far-reaching, said Jha and Jennifer Leaning, the Francois-Xavier Bagnoud Professor of the Practice of Health and Human Rights, director of the Francois-Xavier Bagnoud Center for Health and Human Rights, and moderator of the panel on which Jha sat. In asking Jha about the health effects of migration, Leaning said that often overlooked is the fact that the Syrian civil war and subsequent migration was preceded by food insecurity caused by an extreme drought. A study released in March 2015 showed that the drought, likely influenced by climate change, was the worst since records have been kept, causing farms to fail and livestock to die.

The result, Jha responded, was the massive internal migration of 1.5 million people to Syria’s cities, and spiking food prices. Then came civil unrest, the Syrian civil war, the European refugee crisis, and its backlash, which manifested itself in Great Britain’s vote to leave the European Union, and a potential impact on the recent U.S. election.

“I think that there are a whole series of phenomena happening out there where we don’t connect the dots very clearly,” Jha said. “We think of Syria as a pure national security or conflict issue, but there are substantial issues with drought that led to [internal] migration, that created a conflict, that then leads to the migration that we see in Europe, that threatens and really puts at risk European democracies and how they manage it. It leads to events like the vote in U.K. with Brexit. I think it has some effect on how our elections went last week. These things really are interconnected.”

The event was introduced by Harvard President Drew Faust and co-sponsored by the Harvard Global Institute and the Harvard University Center for the Environment. Faust called on faculty members to share what is known about climate change and fight against the denial of it. 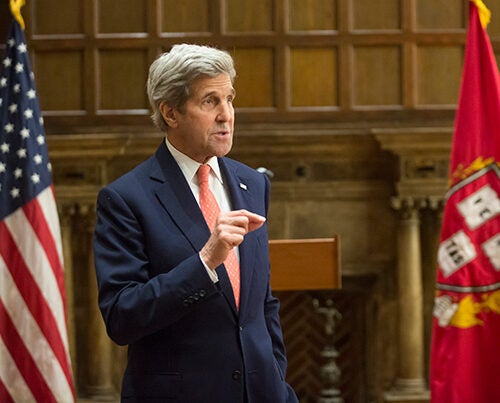 Targeting the ills of climate change

“Harvard is about many things, but it is most about seeking to understand what is true, endeavoring to debunk what is false, and striving to sort out everything in between,” Faust said. “‘Veritas’ is not invulnerable. We must defend it and must reiterate the dire consequences of inaction on climate change and speak plainly about the cost of complacency — and not just to audiences that welcome our message.”

The event touched on a broad array of other topics. Participants saw a climate benefit in efforts by China and India to address severe air pollution. They saw encouraging news in the development of more drought-resistant plant breeds, and pessimism in the fact that 16 of 17 candidates for the Republican presidential nomination in the United States don’t believe climate change is real. The speakers shared a deep conviction that successful mitigation of the results of climate change will depend on good governance, which varies nation by nation.

The most optimistic note was struck by Patterson Rockwood Professor of Energy Daniel Nocera, who believes that science and engineering will find the answer to the problem. Nocera drew a parallel to the concern of civil engineers in late 1800s about urban horse manure, a practical problem that was growing worse as more city residents around the world were able to afford horses.

What those engineers didn’t know, Nocera said, was that the internal combustion engine was being developed and would transform transportation.

“It was a non-problem because science did its job; it’s just that everybody else didn’t know about it,” Nocera said. “When we talk about policy, we’re always extrapolating from the known. What scientists do is discover stuff … so all your extrapolations and concerns go away.

“Imagine just taking air, dirty water, and sunlight, and we can now make liquid fuels at 10 times the efficiency of photosynthesis. That happened over the summer. You’ll be hearing in the coming months that we can take air, dirty water, and sunshine and make fertilizer, and as I speak crops are growing five times faster in the Harvard [Arnold] Arboretum. … So science is delivering the goods.”