Targeting the ills of climate change 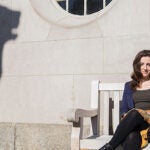 For groups in conflict, genes matter

The effects of climate change almost always have an element that harms human health, whether it’s heat waves, droughts, spreading disease, or other devastating events.

That’s why Secretary of State John Kerry stopped at Harvard Thursday to help launch a joint initiative between the Harvard Global Health Institute (HGHI) and the Harvard University Center for the Environment (HUCE) that he called “important in so many different ways.” The effort is focused on the global health impacts of climate change, which can sometimes be overshadowed by more immediate concerns.

By focusing on health and climate change, organizers hope to provide a research-based understanding of the issues involved, to inform both policies and practice in the future. HGHI Director Ashish Jha, K.T. Li Professor of International Health and a professor of medicine, said the spread of Zika is one example. Though the virus has been linked to climate change’s potential to spread disease, a rigorous examination of the evidence is necessary to determine if that’s truly the case, he said.

That climate change carries health effects is widely accepted. In 2014 the World Health Organization projected that within 15 years there will be as many as 240,000 deaths a year due to climate-related impacts, a number that very well may be an underestimate, according to background information from HGHI.

HUCE Director Daniel Schrag, Sturgis Hooper Professor of Geology and a professor of environmental science and engineering, said it’s reasonable that public health experts focus on solving problems that put lives at risk right now. But climate change is no less an urgent problem, he stressed, even if its threats are mostly long-term. 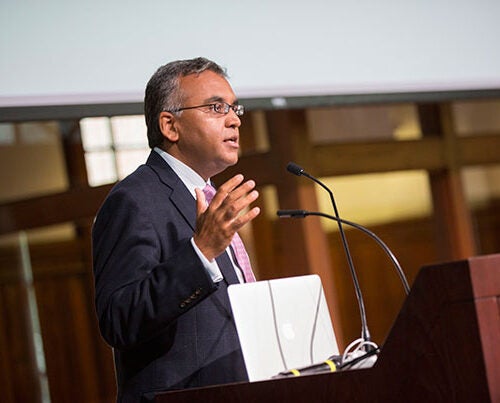 “We’re talking about the future of the planet and we’re talking about future generations. I truly believe that future generations will look back at us and ask, ‘What were we doing? How could we possibly have made the decisions that we made?’” Schrag said. “The progress in Paris and the progress around the world is extraordinary. But we need a lot more. And unfortunately … a lot of people are going to suffer.”

Kerry, Jha, and Schrag spoke at a reception at the Harvard Art Museums. Kerry reflected not just on climate and health, but also on overall progress toward a climate solution, and on the long road he’s traveled since he began working on the issue in Congress in the 1980s.

Kerry, who has been credited with helping forge the 2014 climate agreement between the United States and China that set the table for the Paris accord this past December, said that the biggest impact of Paris will likely be the clear signal it sends to global markets.

“The success of Paris is that we are sending a 190-plus-nation message to the global marketplace and that we are going to change decision-making — though it is not mandatory — in country after country,” Kerry said.

The United States today is ahead of schedule for meeting its 2020 commitment for reducing carbon emissions, Kerry said, and investment behind sustainable energy sources outpaced that for fossil fuels last year. Prices for solar panels have dropped while their efficiency has increased, he added. Should those prices beat those for fossil fuels, he said, the world will have turned an important corner and will see clean energy installation take off.

Jha, speaking Friday morning, said the new initiative’s first step will be to convene experts to discuss a specific research agenda and steps toward tackling it.

“If we ignore [the problem], nobody will notice for the next five or 10 years, and yet at some point the effects will be so substantial … that if we don’t begin to work on it now we’ll have missed an important window,” Jha said. “And I think this is what universities ought to be doing, thinking about the long run.”