Theater from the inside 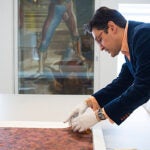 Rose petals for the lost

‘The Garden’ is an intimate, immersive show for tiny audiences

“Touch the wall. Offer your hand. Follow.” The music is soft, and cut by the sound of falling rain. The voice coming through the headphones is gentle. The commands it issues are easy to obey.

“Look at the man opposite. Look at the floor. Where are all the people you know?”

As the four audience members walk or sit or even lean against each other, they become part of a dance, an essential component in an immersive, site-specific performance called “The Garden,” now being staged in Adolphus Busch Hall.

Part of “The Mini Series: Performance for Small Audiences,” “The Garden” (which runs through Oct. 30) is one of four such intimate theater experiences being presented by Oberon, the American Repertory Theater’s (A.R.T.) second stage and club. “U R [Star]” is also up now and runs through Nov. 6. “Temping” and “Violet” will be presented next spring. (Because of the small audience size, tickets are quite limited.)

Although the piece is not physically challenging — it just takes some slow-paced walking and climbing up and down steps — it does require an emotional commitment.

Audience members don color-coded headsets, each of which plays a different script that will lead that participant on an aesthetic and philosophical journey. At times, the audience members will come together; at other times over the course of the 25-minute performance, they will be alone or simply spectators in a piece that plays with perspective and space.

Are we addressing the person across the room or the towering medieval figure looking down at us both? Was that a dancer framed in a doorway — and could that be another outside, across the street? Who is reaching out a hand, and what will any of us see in the other? As the lithe dancers, clad in street clothes, twist and dive to original music by Michael Kiley and James Sugg, the text by Jackie Sibblies Drury and Anna McDonald suggests questions of intimacy and loneliness and also the connectivity of humanity, all in the beautiful and austere setting of the hall.

“This piece is about a journey alone and with other people,” explained Ari Barbanell, the A.R.T.’s director of special projects, who helped bring Nichole Canuso’s original piece to Cambridge.

“We’ve been thinking about theater for small audiences and intimacy” as part of the theater’s mission of “expanding the boundaries of theater,” Barbanell said.

“The Garden” was chosen for the series, she explained, after she saw an earlier staging of Canuso’s piece. “We decided it was a perfect fit. It was one of the most stunning and exciting visions we’ve seen.”

The challenge, then, was how to bring the piece to Cambridge. “We were given several options,” recalled the choreographer Canuso, who premiered the full 50-minute, six-person version of “The Garden” in Philadelphia in 2013. Speaking in the few minutes between performances, she praised the nearly 100-year-old hall, with its soaring ceilings. “This was by far the most beautiful,” she said.

“The Adolphus Busch Hall was always the first choice,” recalled Barbanell. “I don’t think a lot of people know it’s the part of the Harvard Art Museums, so we’re excited that we can help share that space with our audience.”

Both the size of the audience and the necessary interaction serve to enhance the intimacy of the piece, and after one early performance, audience members found themselves discussing the experience even as the next audience queued up. “I found it mysterious,” said Fran Adams, a member of the board of advisors to the A.R.T., who attended. “It was a real connecting to humanity.”

Following the directions “confirmed the notion that this is an orderly universe,” added fellow audience member Robert Ross. “Quite extraordinary,” he said, as the couple exited the museum, where art and the quotidian had merged.