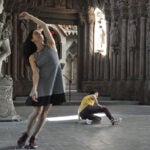 Theater from the inside

Nora Schultz is teaching her first sculpture courses this fall as a new assistant professor in the Department of Visual and Environmental Studies. The German artist, who works across many different media, spoke to the Gazette about her influences, her recent fascination with robotics, and how her own projects inform her teaching.

GAZETTE: Did you always know you wanted to be an artist?

SCHULTZ: I was always connected to art, but at first I didn’t know if I would want to do it as a career. After high school, I was trying a lot of different things before I wanted to leave Frankfurt, but when I was accepted to Städelschule, a small but highly renowned and very international program, I decided to stay. I think that was the best thing that could have happened to me at that time. The professors did not always come in regularly, but there were invited artists from all over the world and a lot of exchange. We had so much freedom.

GAZETTE: Was your university experience different from the approach here?

SCHULTZ: It’s very different here, but it’s also possible to see some parallels. First, I was studying in a painting class and I didn’t paint at all. Then I was studying film but was doing mostly photographs and collages. It was able to think about one medium through another and no one judged you for not working in the medium you were studying. It was a very conceptual approach. Here it’s important for me to work with the students in the widest possible sense. If someone writes a text or produces a sound piece in our sculpture course, I consider it a sculptural project.

We’re working extremely individualized, and it’s very organic. There was a little insecurity in that at first. Some of the students asked, “When is it successful?” which is hard to answer and needs more examples and discussions than a straight reply. Or: “How many projects do we have to complete over the course?” This doesn’t really matter. You can do 30 works or one or you don’t have to finish. It can be years to work on one project. It doesn’t influence my grading. 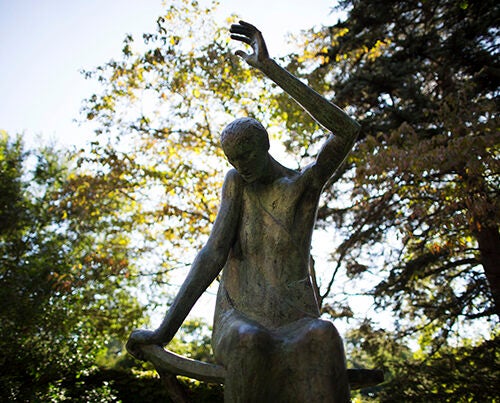 Across Harvard, art you can touch

Sculptures are time-honored members of the campus community

GAZETTE: How did you get your start?

SCHULTZ: I went to Berlin. I was not established at all, working for many artists as an assistant. It was great because I got to learn a lot and see how other artists thought about their work, and how they built something.

One artist very influential for me was Josef Strau. He’s a writer as well, and it’s very important in his artwork. He didn’t have a studio. We were only working in his home in his small living room. It’s a good example of an artist who’s very productive, and works in a sensitive way with material, but he doesn’t always need studio space.

I worked for Michael Beutler at the same time. He has an extremely expansive production, often with lots of labor, material, self-made machines that would then create the artwork and shape it in a different way. It was extremely fun, also sometimes hard. This was really studio work.

GAZETTE: How did you develop a work style?

SCHULTZ: I worked more materially only after studies. Because I couldn’t afford a studio for a long time, I was working at home. I had to shift my furniture and in the evening clean up to move it back. The idea to acquire lots of material in this situation seemed kind of absurd and senseless to me. Sometimes I would sublet a studio for a couple of weeks. It means having to make yourself comfortable there, but then get out again. These experiences are tough, but can be good. I did this very often. By working with video, self-made publications, performance, and sound as extensions of a sculptural installation, I saw an opportunity to extend also the idea of material and space and become more independent from the confines of real space and material issues. Now that I have a great studio here, maybe my practice will change.

GAZETTE: Tell us about your “Sculptures as In-human Beings” course.

SCHULTZ: It’s a course that tries to stretch the ideas of sculptural dimensions, and there’s a double meaning. “In-human” means what comes from inside, and also what is not human. We are thinking about sculpture as an autonomous being, and how it is connected to the human. These days it also makes you think of robots and artificial intelligence, sculptures that are machines that have their own will, or a different consciousness.

GAZETTE: Does this idea about robotics or artificial intelligence relate to your own work?

SCHULTZ: As I mentioned, I often add video to the sculpture. It’s like another dimension, extending the 3-D characteristics of them. I have worked a lot with small toy drone cameras that can fly and GoPros. Both cameras are not meant to represent the cameraperson’s view; they are meant to represent their own view. The GoPro came on the market with an extreme wide angle. It’s more than the human eye. It’s more hysterical. The drone is just meant to fly and have fun and [get a] different angle on things. When you use these very small ones, you cannot really control them. You can operate them up to a certain point, but they fly around, fall down, break all the time, and you have to fix them. They absolutely have their own will. They are so stubborn. It’s like working with a partner who has his/her own view. And it extremely changes the perception of matter and space.