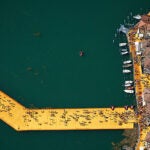 The king of ‘absolutely irrational’

A group of avant-garde women involved in Boston’s community radio scene in the 1970s and ’80s gathered Tuesday evening for a soulful reunion that showcased the feminist movement at its deepest.

The International Women’s Day (IWD) Radio Project that launched in 1979 and broadcast once a year for 14 years brought together a diverse group who shared one mission: to have a voice at a time when women were hushed in radio media. For the first time since the last IWD broadcast, five pillars of the Radio Project came together to remember and reinvigorate their purpose.

“The excitement in the room is really palpable,” said Evelynn M. Hammonds, the Barbara Gutmann Rosenkrantz Professor of the History of Science and professor of African and African-American studies, who moderated the event. “They are wonderful people, and the work we did on this both represented a kind of political activity and helped create the very notion that there were feminist communities in the Boston area represented by the programming they pulled together.”

The panel members talked about their personal experiences and how the all-volunteer IWD project shaped their lives. The speakers included Melanie Berzon, operations director and host of “Jazz in the Afternoon” on KCSM Radio; Eileen Bolinsky, producer and editor of NPR’s “Here & Now” at WBUR; Madge Kaplan, director of communications and host of the Institute for Healthcare Improvement’s “WIHI”; Anita McFadden, global marketing manager for talent acquisition at Medtronic; and Kate Rushin, poet, author, educator, and a regular member of “The Nose,” an arts and culture roundtable on “The Colin McEnroe Show,” WNPR-FM, Connecticut Public Radio.

“It was rare back then that women hosted in a prominent way,” said McFadden. “[The IWD Radio Project] happened because we thought it could, and a little moment of ‘why not’ turned into an important part of our community’s history and changed lives.”

The program included a rolling slideshow of black-and-white images from WNBR at the Massachusetts Institute of Technology, where each year women essentially camped in the basement for 24 hours to produce the special broadcast that included music, news, poetry, and commentary. During the discussion, IWD promotional recordings from some radio elite were played, including one by Zenzile Miriam Makeba, the singer and civil rights activist from South Africa, and another, “Happy International Women’s Day from Ella Fitzgerald,” recorded after a performance at Boston Symphony Hall.

The discussion was held in conjunction with “Radio Contact: Tuning in to Politics, Technology, & Culture,” an exhibit staged by Harvard’s Collection of Historical Scientific Instruments in the Science Center. Hammonds organized the panel after noticing media memorabilia about the IWD Radio Project in the exhibit.

“I came to a poster toward the back. I stood there and realized I knew these people and I knew of that program. It was really prominent in the feminist community in that day,” said Hammonds. “So to me, and certainly to the curators, we saw it as an opportunity to say yes, gender played a role in the history of radio and popular culture. It signaled an important shift for me as a historian. Some of them remain in radio today, which is a sign that the IWD programming had an impact.”

That influence and the crossover between science and humanities is relevant today, said Audrey Effenberger ’19, a student board member of the Harvard Museums of Science and Culture.

“First, there is still value in radio, but it was also very interesting to hear the stories of people who have worked in radio and related industries and can show us how it all began, how they got here, how they’ve seen it change over their lifetimes,” she said. “I see women in positions of power and succeeding, but there is still a lot of work to do, not just in radio media, but in the world.”

Sakia Yasmine of Hull, who attended the discussion, was an engineer at WGBH in the 1980s when she participated in the radio project, and brought her daughter along. “My daughter was in elementary school at the time. We brought food and camped out with the women,” said Yasmine. “It impacted her in that she got to see other women do radio engineering, so she’s never been afraid to do what she wants to do in her own life.”

Kaplan said that going to MIT to work on the radio project was like walking through a secret door. She said she could not believe the world she found in the basement studio: one of invigoration, inspiration, and passion.

Bolinsky and Berzon agreed, noting the strong women’s voices behind the microphones were not afraid to bring community radio to the forefront then, and are still heard today.

The spirited conversation moved from heartfelt memories to the question they raised: Will the women resurrect their radio day? Rushin revealed this was her secret hope.

“I think in this time we are living in, we all feel a need for a different kind of conversation to dominate our airwaves. It’s so easy to get caught up in the negativity that we are hearing everywhere we turn, that we are carrying around in our pockets on our devices,” she said. “The need for true dialogue, concerned dialogue, loving dialogue that is intending to fix a problem, is now more than ever.”

University of Michigan professor and author Susan Douglas will give a talk titled “From Jazz to Hip Hop: Radio as a Turnstile Between White and African-American Cultures” 6 p.m., Nov. 9 at the Science Center, Lecture Hall D, 1 Oxford St. This is in conjunction with the “Radio Contact” exhibition.

“Radio Contact” is free and open to the public through Dec. 9 at the Harvard Science Center, second floor gallery, room 251.