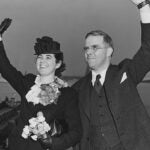 A family history of wartime heroism

To understand where the University is, lecturer teaches, it’s important to see where it’s been

“It all began when I wrote my dissertation on the history of religion at Harvard in the 19th century,” said Stephen Shoemaker, a lecturer on the study of religion at Harvard. “But specializing in the details of Harvard’s history is a career-limiting move. It prepares you to teach at one university,” he said with a laugh. “Yale doesn’t usually return my calls.”

The winner of the 2016 Shattuck Excellence in Teaching Award, Shoemaker holds a master’s in theology from Harvard Divinity School and a Ph.D. from Harvard. A noted lecturer on campus, his signature class is “Harvard’s History and Evolving Religious Identity,” which he created and co-taught with the Rev. Peter J. Gomes for many years before Gomes’ death in 2011. In spring, the course had a record 90 students.

“The class was held in Holden Chapel in the Yard, and it was packed,” said Michael Ledecky ’16, a government concentrator. Ledecky said the class was eye-opening. “I had no idea what a large role religion played in the origins and development of Harvard.”

Shoemaker said it is common for his students to be surprised by the significance of religion in the evolution of Harvard, and he believes part of his mission is to raise that awareness.

“Harvard might not have ever gotten off the ground if it wasn’t for a religious controversy,” Shoemaker said, standing in the center of the Yard in one of his trademark vests — complete with pocket watch chain.

Shoemaker explained that not long after Newtowne — later renamed Cambridge — was founded in the 1630s, the fledgling community was divided over the question of how to secure salvation. The Puritans had heated debates about the nuances of soteriology, Shoemaker explained, with one group placing a radical emphasis on the idea of grace, the other insisting that good works played a part. Arguing for the former view, charismatic Puritan leader Anne Hutchinson bucked the establishment opinion in Newtowne and was ultimately tried, convicted, and banished for her beliefs.

To provide a bulwark against remnants of Hutchinson’s free-grace theology, just two weeks after she was banished the General Court of Massachusetts finally released funds in November 1637 to establish the “College at Newtowne” (renamed Harvard in 1639), Shoemaker said as he stood framed by the John Harvard Statue, thronged by tourists. While Harvard had been established on paper by the court in 1636, no action was taken to actually create the College until after Hutchinson’s trial.

“So, we can view the establishment of Harvard,” Shoemaker said, “as being a corrective to a religious point of view that many in the Massachusetts Bay Colony saw as a threat to Puritan religious orthodoxy.”

Art history concentrator Robert Fitzpatrick ’16 said that Shoemaker was also the type of professor he had hoped to have when he applied to Harvard. “When a professor is passionate about something, it’s hard for students to check out,” said Fitzpatrick.

One of the things that drew Shoemaker to study Harvard’s history was “luminous particularity,” a concept borrowed from the late Hollis Professor George Huntston Williams. Shoemaker said that Harvard’s history represents a unique lens through which to view many of the issues and debates in broader U.S. history, and religious history in particular, including not only Puritan ideas relating to salvation, but the emergence of Christian liberalism and the concomitant evolution of the undergraduate curriculum.

“This is why it is important that Harvard has a course about its own history,” Shoemaker said, passing in front of Massachusetts Hall, Harvard’s oldest standing building, dating to 1720. “Such a course gives students an appreciation for Harvard’s durability and its centuries-long significance in American higher education.” 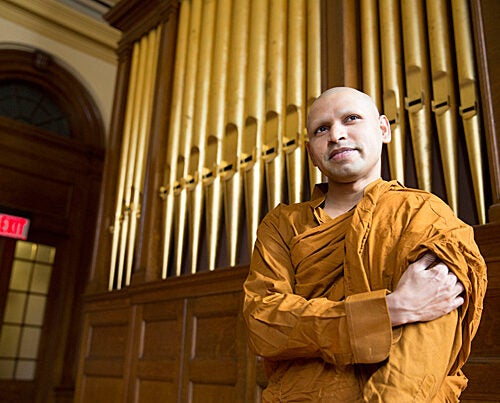 As Divinity School students adapt to University life, they also face assumptions made about them

Beyond the religious controversy surrounding the origins of Harvard and luminous particularity, Shoemaker teaches his students how to properly engage history. “It’s been stated that a good historian tries to turn mirrors into windows,” he said. Shoemaker explained that if we look to history only seeking our contemporary values, then our encounter, like a mirror, reflects back to us our own modern beliefs and understandings. However, he said, if we view history more as looking through a window, then we employ those texts and figures as a way to approach history on its own terms and in its own context, which will give us a more honest understanding of the past.

For example, Shoemaker pointed out that modern students might be tempted to view the Puritans who founded Harvard as backward and intolerant, in part because, after all, they branded Hutchinson a heretic and banished her. Yet this view forgets that these same Puritans opposed their right-wing colleagues who insisted that Harvard should focus on theology and emphasize preparation for professional ministry to the exclusion of a liberal arts education. Harvard was always resolute in maintaining a liberal arts focus, Shoemaker said, thus resisting the pressure from prominent figures, including Cotton Mather (1663-1728), a prominent Puritan minister and writer in Boston, who considered Harvard’s classical education a “a vile peece of paganism.”

“In contrast, Harvard President Charles Chauncy in 1655 had declared that ‘all truth is God’s truth,’ including those components of a classical education that come from ‘heathen’ authors,” Shoemaker said.

Shoemaker said that while universities today may not allot a prominent role to religion, it would be a distortion to adopt that perspective when approaching the history of Harvard. He told a story about a meeting Gomes had with an administrator of the Faculty of Arts and Sciences. In a University Hall room overlooking the Memorial Church, the official said that if the Yard were designed today, the church would certainly not occupy such a prominent position. Gomes, who was the Pusey Minister in the church, replied, “Well, it’s too late to get rid of us now.”

Anthony Chiorazzi has an M.Phil. in social anthropology from Oxford University and a master of theological studies degree, with a focus on religion and the social sciences, from Harvard Divinity School.