Why lose the headphone jack? 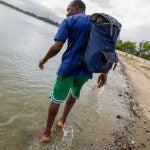 The steady fade of our analog past continued this month when Apple released its latest smartphone, the iPhone 7, without a headphone jack.

Amid the hue and cry from those who use headphones to listen to music while running, talk on the phone while driving, or block out subway crowds, the Gazette tracked down Woodward Yang, the Gordon McKay Professor of Electrical Engineering and Computer Science, a University Fellow at Harvard Business School, and faculty co-director of the new master’s program in design engineering at the John A. Paulson School of Engineering and Applied Sciences and the Graduate School of Design. Yang has kept an eye on the cellphone industry since he developed the CMOS image sensor that is common in cellphone cameras. He also testified as an expert witness in Apple’s patent infringement lawsuit against Samsung.

Yang, an iPhone user, doesn’t count himself among the outraged — he confessed he barely uses headphones — and said that old technology has to make way for new, especially in a small device such as a smartphone. (He also pointed out that Apple has allowed for headphone connectivity via the phone’s Lightning port.) The key question, Yang said, is what Apple will do with the freed-up space.

GAZETTE: Apple has always been a trendsetter: They got rid of the floppy disk. The latest is the loss of the headphone jack. Is this a big deal, or will we look back at it with a shrug?

YANG: There are a couple of different ways to run your business. One strategy for approaching your business is like what Alfred Sloan of General Motors said: “A car for every purse and purpose.” They tried to design a different automobile that specifically targeted the lifestyle and budget of particular segments of their customers. Then the flip side of doing this was Henry Ford’s approach. Ford was allegedly quoted as saying, “If I asked my customers what they wanted, it would be a faster horse.” So Ford gave them what he knew they wanted, but they didn’t know they wanted yet.

You need to understand the business that you’re in. Do you need to create a phone or a car for every customer that you have and individualize? Or are you in the mode where you’re delivering the best in technology and you’re giving people stuff that they never imagined that they needed yet? That’s where Apple thinks they are. If they [want to be] on the cutting edge, the bleeding edge, then they have to make these tradeoffs. You can’t forever keep compatibility, otherwise you’d still have the VHS tape and a CD-ROM player and a floppy disk in our laptops and the laptop wouldn’t be very small. I think that they’re trying to make the tradeoff so they can deliver the product that you didn’t know you really wanted.

GAZETTE: And what are those products?

YANG: The products are going to do things for you that you never knew that you wanted them to do. What they’re going to do is, hopefully, make your life more enjoyable, more comfortable, more convenient, more productive. If you look at the cell phone, it’s just amazing what it has become. A long time ago, a cellphone was just a phone. The great thing was you could actually have your lists of phone numbers there, your contacts. But now people play music on it, listen to podcasts on it, check your stocks, check your email … you shop, right? You stay in touch with your friends through Facebook or Snapchat. It’s doing all these new things, and who knows what the phone will do for you next year or in five years or in 10 years?

GAZETTE: I think Apple explained it as making room for a faster processor and a battery was the other thing …

YANG: The faster processor is marketing hooey. The space for that doesn’t make for a faster processor. The space for that does make room for more battery. And you need more battery for a faster processor, because the faster processor can use more power. I believe that the new iPhone 7, from what I’ve read — I’m not an Apple expert, and I don’t always believe what I read, but it said the battery life is two hours longer. So you say, “Oh, you got rid of my analog headset but you made my phone battery last two hours longer.” I don’t think you could have both, because the amount of space that the headset connector takes is pretty significant.

GAZETTE: But to look at the flip side of that, it strikes me that the headphone is probably one of the most widely used accessories for a smartphone today …

GAZETTE: I think so, but you tell me …

YANG: The accessory that’s probably used by everybody is the RF [radio frequency] connection for Wi-Fi and the touchscreen. I have a headphone set and I’ve been using an iPhone for quite a while. It’s just something I carry around, but never use. But I know that some people do use it a lot, so the people who are most upset are those whose lives are being disrupted by this lack of a headphone jack. But they’re not getting rid of the headphone per se, you can still have a wired headphone that fits into the Lightning socket. So I don’t think it’s weird or tragic that it’s not there.

GAZETTE: Just to follow up on your comments about the battery. A friend has Bluetooth headphones that have to be plugged in. So now you need headphones with batteries in them and there are more things to charge and more batteries to run down.

YANG: The battery issue is already complex. The first thing to die limits what you can do; I do believe that. But for myself I just don’t use the headphones all that much in my everyday life. My car has hands-free Bluetooth connectivity. In my office and at home, I have Amazon Echo, which plays music. I just don’t find myself needing headphones except on an airplane. For other people, if you listen to music while you exercise, for example, I think that you are probably going to be a little upset about that. But it’s not that the headphone’s gone, you can still get a Lightning headphone. I’m not sure it is as revolutionary or disruptive as people are playing it up to be.

GAZETTE: What do you think is going to be the next big smartphone innovation and who is driving that innovation these days, as Apple has done so regularly?

YANG: Innovation, at least as related to the mobile phone, has been happening for a long time. The things that we see now are actually the result of lots of different things that have happened over the past 30 to 40 years: developments in science, technology, engineering, the ability to make faster and faster chips smaller and smaller, differences and changes in laws and regulations to allow licensing, the massive infrastructure to do this. If you look at this, the nature of the innovation in telephony has been changing over the last 30 years from all the things that led to the mobile phone. Probably up until the late ’90s or early 2000s, it was a technological challenge just to get everything to work. Completing a phone call was almost a miracle back then. It was really a technological issue. You were happy, you didn’t complain. But eventually everybody was actually able to make the phone work. Nokia made a phone work, Motorola made a phone work. Everybody can make a phone work. Gee, even Apple, who had no technical background in mobile telephony technology at the time, can make a phone.

And then it happened, because the tech had been well established, the innovation, the differentiation moved to a different level. It wasn’t who could make the best phone connection, because they’re all really good. It was who could provide it in a format that was easy to use, and fun. And then we start to move into the smartphone. Now, the question becomes who can combine that [smartphone] with interesting services, so you can see information that you want to see? Who could make a phone that works all over the world without you having to have extravagant roaming charges? I think in the ’90s and early 2000s there were massive roaming charges if you just went from Massachusetts to New Hampshire. Now, all over the United States there are no roaming charges. Are we going to a day where there will be no roaming charges for the entire world? That’d be nice, wouldn’t it?

GAZETTE: What would you like to see? What functionality or device if you could wave a magic wand?

YANG: At this point, I’ve seen so many unintended consequences of technology that I think it’s really dangerous to wish for something. Because you might get what you wished for. I’m sure a lot of older people out there wished they could have a phone that could go everywhere with them, so they wouldn’t have to be tied down to the office. Now they have a cellphone and they never sleep. Those same people wished, oh, it would be so great to get my email where I am, so I wouldn’t have to be at the office. Now the office follows them wherever they go. And so I think we have to be careful what we wish for, because we might get what we wish for and it might also change the situation and circumstances that you’re living in in a negative way.