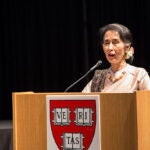 An opponent who prevailed

Putin and his government seek respect, stability from next U.S. administration, panel says

What does Vladimir Putin really want? It may sound like an easy question, or maybe a setup for a bad joke. But according to John Beyrle, a former U.S. ambassador to Russia who spoke Monday evening at a Harvard Institute of Politics roundtable on that nation and its leader, it’s a crucial question for the next White House occupant to understand.

What Putin wants, said Beyrle, is respect, and he can choose startling ways of getting it.

“Our nuclear relationship with Russia is the main existential issue,” Beyrle told the Harvard Kennedy School panel on “Challenges for the Next President: The Crisis With Russia.” “Putin has boasted about Russia’s nuclear might, so the taboo of using one’s nuclear arsenal as a bragging point has been broken. That should give us all pause. Most people wouldn’t understand the details of a modern nuclear arsenal, but they do understand a senior Russian official who boasts the ability to reduce the U.S. to rubble.”

As moderator and former CNN Moscow bureau chief Jill Dougherty pointed out, circumstances in Russia can change by the day, with the weekend’s Syrian ceasefire and legislative election as the most recent examples. Yet the panelists agreed that the next U.S. president needs most of all to understand Russia’s overall mindset.

Panelist Maxim Boycko, a visiting lecturer in economics at Harvard, pointed out that the main lesson of last weekend’s legislatives election wasn’t that Putin seized more power, but that only about half of the populace voted. That indicates a certain apathy setting in during the Putin era. “I wouldn’t say that Putin is the problem or the solution; he is a fact. If you look at the Yeltsin and the Gorbachev eras, there was a sense that the Soviet Union was opening up. That’s not something we see anymore.”

The two principal U.S. presidential candidates have far different approaches to Russia. Donald Trump has made headlines by speaking well of Putin, while Hillary Clinton has taken more of a hard-line, “almost a macho approach,” as Dougherty put it. Yet the panelists emphasized that the choice doesn’t boil down to one candidate wanting to appease Russia and one wanting to confront it. Beyrle said Putin wants to be understood, not necessarily to be coddled. And while Trump has proclaimed admiration for Putin, that’s not the same thing as offering a coherent strategy.

It wouldn’t hurt, Boycko suggested, for the two nations’ leaders to have a personal relationship. “It’s very hard for me to comment on Donald Trump, but the personal aspect is quite important. The question is how the two interests can be aligned with each other, and that starts with a deep understanding of the other side — what it is that the other side needs from this relationship. Whichever candidate can do that better would have the best chance of improving the relationship.”

Beyrle noted that Putin’s ties with the United States have been somewhat aggressive dating from his first meeting with President Obama, when he laid out a “tremendous list of grievances.” The narrative of Putin’s reign, Beyrle said, involves righting wrongs that he believes were done when the Soviet Union fell apart, its satellite nations drifted away, and NATO strengthened. “He and the people around him want a say in the major international issues, and they feel they’ve lost that.”

Beyrle rejected the notion that Russian leadership would necessarily be friendlier to Trump’s approach.

“I can’t discern any coherent foreign policy out of Mr. Trump,” Beyrle said, and he suggested that the Kremlin can’t either. “The things Mr. Trump says may be pleasing to them, but they don’t know anything about his policies. Secretary Clinton by contrast has a well-defined policy that has been spelled out. It’s likely that the Kremlin would rather deal with that than with the unknown quantity of Trump.”

In a question-and-answer session afterward, Dougherty discussed another contributing factor: the television network RT (formerly Russia Today), and its rather dark impact on the Russian mindset. “The anchors are young, so it looks like a regular television network. But I believe their mission is to undermine and attack Western democracy and the belief that it can work. The message is ‘Everybody lies. Maybe we lie, but the Americans lie too.’ So it’s meant to undermine faith in anything. That’s dangerous and nihilistic. But in the context of social media, it works.”