Shop till you drop — or add 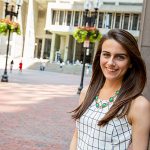 For one week at the beginning of each semester, students at Harvard can take any class they can fit into their busy days. Many take full advantage of the sampling opportunity known as shopping week.

One day before the registration deadline, Emma van der Terrell, M.T.S. candidate ’18, had locked down her first semester at Harvard Divinity School. Originally planning to shop six classes on top of a requirement and a language elective, her advisor suggested that juggling eight classes might be ambitious for a first-year graduate student. Though Emma eventually settled on four, she is still mulling over that fifth class.

Senior Thomas Hewing ’17 still had some decisions to make by the deadline, but said he’s got his four classes “pretty settled.” Mostly done with his requirements, Thomas is anticipating a relatively easy fall, though he still shopped seven classes.