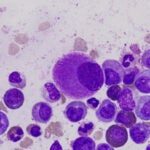 Researchers at Massachusetts General Hospital (MGH) and the Harvard Stem Cell Institute (HSCI) have identified a drug compound that arrests in mice the progression of acute myeloid leukemia (AML), a bone marrow cancer that has not seen a new therapy in four decades.

The research, led by David Sykes and David Scadden, co-director and director of the MGH Center for Regenerative Medicine, was published today in the journal Cell.

AML develops when blood stem cells and blood progenitor cells cannot differentiate into adult white blood cells, and instead get frozen in an immature state. Those immature cells take up space in the bone marrow and crowd out healthy cells, making it more difficult for the dwindling number of healthy blood cells to keep up with the demands of the body.

Current therapies are designed to kill the cancer cells using toxic compounds — namely intensive chemotherapy — that ultimately assault the body, wipe out the immune system, and leave patients vulnerable to what could be deadly bacterial and fungal infection. 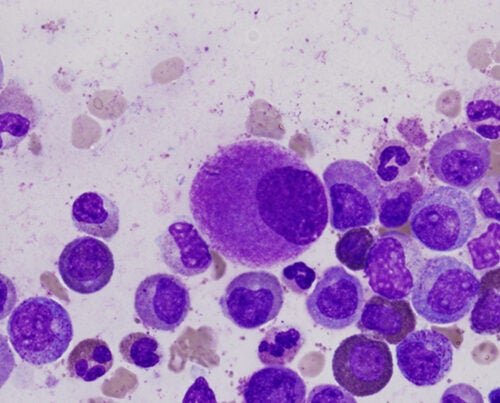 Chemotherapy typically used to treat younger people “is much too harsh for older patients,” which is problematic given that the average age of an AML patient is 67, said Scadden, who is also a practicing hematologist.

To find an alternative, the researchers used an approach that turned one of the most deadly subsets of the disease, acute promyelocytic leukemia, into one of the most treatable forms. Rather than bludgeoning and killing the leukemia cells, the researchers searched for a compound that would encourage the cells to differentiate. When leukemia cells differentiate, they live only a short time and die as part of their natural biology.

Sykes, a postdoctoral fellow in Scadden’s lab, engineered mouse progenitor cells to glow green once they matured. The team, in collaboration with the Broad Institute of Harvard and MIT, performed a functional screen with 330,000 compounds and found a dozen that were able to make the cells turn green, indicating those compounds forced the cells to differentiate. Of those, 11 blocked a metabolic enzyme called DHODH, effectively forcing the cells into what the researchers called a period of fasting.

“Cancer cells are metabolically different from normal cells. Our results suggest normal cells can tolerate periods of fasting or starvation, while the cancer cells cannot. In this case, the fasting triggers a change,” said Sykes

After 10 weeks of treatment with a known DHODH inhibitor, mice with AML and mice with human leukemia cells gained weight, were active, had fewer number of leukemia stem cells, and lived longer, indicating a meaningful disease remission. Notably, no animal had disease progression on therapy. The researchers hope to test the inhibitor in a clinical trial.

“We need desperately to find new therapies,” not only for the 20,000 people diagnosed with AML every year, but for all cancers, said Scadden, the Gerald and Darlene Jordan Professor of Medicine and chair of the Stem Cell and Regenerative Biology Department. “We think that an approach to overcome the differentiation blockade of cancer may be a strategy with broad application and one we should explore for other cancer types.”