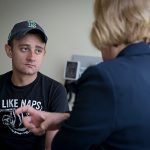 Finally, hope for a young patient

Although targeted drugs like Gleevec have revolutionized the treatment of chronic myelogenous leukemia (CML), patients generally must take them for the rest of their lives and may cease benefiting from them over time. In new research that could suggest a road to a cure, scientists at Harvard-affiliated Dana-Farber Cancer Institute and Boston Children’s Hospital have found that CML stem cells die when a protein called Ezh2 is inhibited. Drugs that target the protein are currently in clinical trials for other cancers.

The findings, reported online today in the journal Cancer Discovery, raise the prospect that Ezh2 blockers, in combination with Gleevec and similar drugs, could eradicate the disease in some patients relatively rapidly or could be an effective therapy for those who become resistant to Gleevec-like agents, the authors write.

“The vast majority of patients with CML do remarkably well on imatinib [Gleevec] and similar drugs: The disease is well-controlled and side effects are tolerable,” said Stuart Orkin, the study’s senior author and a pediatric hematologist/oncologist at Dana-Farber/Boston Children’s Cancer and Blood Disorders Center. “In only 10-20 percent of patients, however, are the leukemia cells fully cleared from the body. The other 90 percent retain a reservoir of leukemic stem cells — which initiate the disease — and must stay on the drugs permanently.”

CML is a slowly progressing type of blood cancer that develops in the bone marrow. Primarily occurring in adults, it is rare in children.

Over time, some patients develop resistance to Gleevec and other drugs that block BCR-ABL, the misbegotten “fusion” protein that drives CML growth. Although second- and third-line targeted therapies can often return the disease to remission, some patients don’t benefit from these drugs or develop severe side effects.

The new study grew out of efforts to discover whether different types of cancer are susceptible to Ezh2 inhibitors. In laboratory experiments, the Dana-Farber/Boston Children’s researchers found that not only is Ezh2 overabundant in leukemia stem cells, but it helps them survive and give rise to full-fledged CML cells. Follow-up studies in mice showed that inactivating Ezh2 through gene-editing techniques caused CML stem cells to die, halting the disease at its source.

“The stem cells’ dependence on Ezh2 suggests they will be especially vulnerable to drugs that target the protein,” Orkin said. “Such drugs are already in clinical trials for other diseases, including lymphoma and some solid tumors.”

Epizyme, a biopharmaceutical company based in Cambridge, Mass., recently opened a pediatric trial of an Ezh2 inhibitor for children with rhabdoid and other tumors. Dana-Farber/Boston Children’s is a site in the multicenter Phase 1 trial.

Although adding Ezh2-targeting agents to the standard drug regimen for CML has the potential to dramatically shorten the treatment period for many patients, ethical considerations may lead to the agents’ first being tested in patients who don’t respond to Gleevec and similar drugs, either initially or after drug resistance develops, Orkin said. “Our findings suggest inhibition of Ezh2 should be considered as a way to eradicate CML when used in combination with current targeted therapies. It offers a promising approach to shortening the duration of therapy in order to achieve a cure. If successful, the cost savings of such an approach could also be significant.”

The study was funded in part by the National Institutes of Health and Hyundai Hope on Wheels.