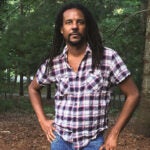 When Professor Douglas asked students in his course “The Emergence of an Early American Identity” to examine a piece of Revolutionary War-era art, the first response came from Oliver, who described the image as “one Indian sitting on a box by himself.”

The encounter — and the class — were imagined, a theatrical sketch created by the Bok Center Players, a Harvard-based ensemble that uses the stage to address challenging topics such as race, gender, and identity.

An ensemble based at Harvard, the Bok Center Players use the stage to address challenging topics such as race, gender, and identity that arise in the classroom and beyond.

“Material-wise, we want to be responsive to what’s happening on campus right now — where the real tension areas are — so we can begin or continue to effect dialogue and, hopefully, begin to act,” said Mara Sidmore, artistic director for Applied Theatre Practice at the Derek Bok Center for Teaching and Learning, which recently celebrated its 40th anniversary. “The Bok Players are a means of having those hard conversations in a way that allows for a variety of perspectives to be voiced and heard in a safe environment.”

The Players launched in 2007 as a way of addressing issues of campus diversity, specifically around gender disparity in the natural sciences. The ensemble has grown from six performers to 12, and is made up of professional actors and grad students, with undergrads often playing behind-the-scenes roles.

“The mix is very important to me,” said Sidmore. “We need to be learning from one another — academics learning about the craft of theater, actors learning about life in academia from those who are living it. That firsthand perspective is extremely important.”

The group has about six regular sketches, and is developing material on the topics of implicit bias, racial equality, Title IX, and unwelcome conduct. Performances are on campus and beyond. After each 15- to 20-minute show, the actors break the fourth wall while remaining in character to discuss their actions with the audience. Sometimes they extend the learning by inviting faculty and students to “step into” a sketch.

“We’re going after a human experience,” Sidmore said. “In academia we are used to tuning in, first and foremost, with our brains. The theater is a way of connecting our intellect with our heart. The most effective learning happens when both are engaged at the same time.”

During a recent rehearsal at the Bok Center, which is on the third floor of the Science Center, Sidmore paused in directing the actors to note that the beauty of the dialogue with the audience is what often elicits “aha!” moments.

“We were recently doing a piece about gender-based discrimination and harassment, and a woman in the audience recently argued, ‘This character is written to be passive. There are lots of ways she could stand up for herself.’

“We said, ‘What could she do differently?,’ brainstormed ideas, and asked her to participate in a replayed moment of the piece. Even though she did make different choices, she was shocked to realize that her initial ideas did not play out as she thought they might. She was still very much intimidated by the aggressor in the piece.

“We might think we can behave a certain way, but we can’t know that unless we try it in advance. The goal is for audience members to leave with further awareness of issues, but also with strategies for the future.”

The Bok Center Players kicked off the academic year late last month at the New Faculty Institute, where they performed “Teaching Beyond the Timeline” for two dozen new professors across the Faculty of Arts and Sciences.

Annabel Kim, an assistant professor of romance languages and literatures, was struck by “how finely they observed and could extract certain types” in their character development.

“I could see some of my former students in these random characters,” Kim said. “It was a sense of recognition — not just what the students are like, but what I am like as a teacher. That was probably the most shocking and best part — seeing myself transformed into this tall, skinny white guy.”

Kim immediately recognized Oliver, the student “who took up so much space and spoke with little self-consciousness.” From there, watching the Professor Douglas character struggle to keep the class focused, she thought of her own teaching style.

“That’s the biggest question I’ve been wrestling with: How might I inadvertently be shutting my students down when I think I’m engaging them?” she said. “The performance shows how well-intentioned we are, but how there can be a disconnection between what we think we’re doing in the classroom and what the students actually experience.”