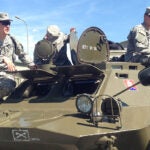 On Monday, President Dilma Rousseff of Brazil took the stand to defend herself against impeachment charges, calling the trial an injustice and a coup d’etat. But her downfall was already inevitable.

Two days later, Brazil’s Senate voted 61-20 to impeach Rousseff for breaking fiscal laws to cover up a budget deficit, intensifying the political polarization that has wreaked havoc in the country of 200 million.

A deep economic recession hurt Rousseff’s popularity and weakened her governing coalition, but what sealed her fate was the upsurge of public anger over the discovery by federal investigators of a $20 billion corruption scheme at the state oil company, Petrobras. The probe, known as Lava Jato for the Portuguese “car wash” because it began at a service station, has implicated dozens of government officials and businessmen, and is now Brazil’s largest corruption investigation.

The Gazette spoke with Frances Hagopian, the Jorge Paulo Lemann Senior Lecturer on Government, about the startling reversal of fortune for Rousseff, a former guerilla fighter who became Brazil’s first female president with the leftist Worker’s Party in 2010.

GAZETTE: Brazil’s president, Dilma Rousseff, has been impeached — how did this happen?

HAGOPIAN: I’m sure that a lot of people are asking the same question because a few months before, when the vote of impeachment passed in the Chamber of Deputies, most experts did not think this would go forward. This government was very popular for its achievements in social inclusion, but the crack started with the protests of 2013 against rising bus fares, police abuse, and government corruption. And after that, her government grew weaker.

GAZETTE: What factors weakened her government?

HAGOPIAN: Two big issues, the slowing economy and corruption. First, the economy slowed in part because China’s economy slowed — China is Brazil’s biggest trading partner — and the government postponed necessary economic adjustments because of the 2014 presidential elections. And this happened at the same time that Brazilians were growing more concerned about corruption. There was a sense in 2013 that there was impunity, and then when Lava Jato broke, it was like adding kerosene to the fire. This put her government in a very difficult position. It was weakened and unpopular. As she grew weaker, it was harder for her to right the ship because she was losing support within the governing coalition, which was not well set up to support her programs.

GAZETTE: Corruption has been a common problem in Brazilian politics for many years. Why did this scandal suddenly pose a threat to her government?

HAGOPIAN: It’s true that corruption was always there, but it could be that the scale was getting worse. Secondly, the scandal was brought to light by investigative institutions of the Brazilian state. And third, corruption always stinks more when things aren’t going well. When the economy is going well, and people are taking some cuts, everything is OK, but when times get tough, people get angry. And I’d also say that a key factor is where the corruption scandal hit. In this case, investigators found corruption at the heart of Petrobras, the state oil company that was the model of the perfect, efficient state enterprise, and one of the world’s biggest companies, commanding a significant percentage of Brazil’s economic activity. It was a toxic mix of investigative institutions, the economic crisis, the scale of the corruption, and the fact that it was Petrobras. 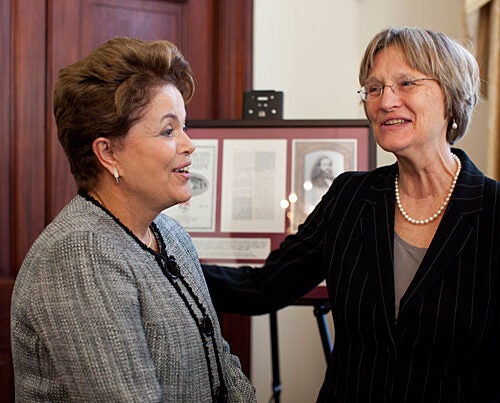 GAZETTE: Was Rousseff part of the corruption scandal?

HAGOPIAN: We do not know that.

GAZETTE: What are the charges against her? Why is she being impeached?

HAGOPIAN: The charge of which she was accused in the Chamber of Deputies, and for which she stood trial in the Senate, was violation of Brazil’s Fiscal Responsibility Law. She’s accused of having fudged accounts in order to cover a budget deficit as she was going into the 2014 election campaign. She’s not accused of corruption. There are a number of government officials who have been accused of corruption, but no evidence has come to light that she was involved in corruption. She was the head of Petrobras during that period, but there is no indication of her knowledge or involvement. That could change. The Supreme Court has just opened an investigation into her and a few very-high-ranking officials. It could come out that she’s guilty of corruption, but there is no evidence of that. … So she’s not being impeached because of corruption. She’s being impeached because of a transgression of the Fiscal Responsibility Law.

GAZETTE: Some experts say that is not a crime for which she should be impeached.

HAGOPIAN: I am not a jurist, but the Brazilian Constitution provides for impeachment in the case of a crime of responsibility. Loosely translated, this is a high crime or misdemeanor in the United States. The Brazilian Constitution does not lay out what constitutes a crime of responsibility any more than the U.S. Constitution lays out what a high crime or misdemeanor is. Is having an affair with an intern in the Oval Office a high crime or misdemeanor? Or is it lying to Congress about a war? What is revealing is that during the impeachment vote, very few of the 360-something deputies who voted to impeach her mentioned the crime of fiscal responsibility. They mentioned the economic crisis and a number of other things. So to me, that raises questions about whether that was an impeachable offense.

GAZETTE: Rousseff has said that the impeachment trial is an injustice orchestrated by her political opponents. Many of her opponents who voted to impeach her are being investigated for corruption.

HAGOPIAN: Including the then-presidents of the Chamber and the Senate.

GAZETTE: So what does this impeachment vote actually represent?

HAGOPIAN: I don’t think it’s a secret that the impeachment vote was really a vote of no confidence in the government. The problem is that Brazil doesn’t have a parliamentary system of government. In that sense, the impeachment was political. Many members of the Congress were concerned about the Lava Jato investigation continuing and reaching them, and they may have hoped that by threatening her with impeachment, she would have somehow tried to stop the investigation, but I don’t think any president would have had the capacity to stop it.

GAZETTE: So was this a political trial orchestrated by her opponents, as she said?

HAGOPIAN: It is political, but perhaps it’s too simple to say that only her opponents played a pivotal role. Whether or not that’s fair, I don’t know. Brazil has a party system with many parties — 34 — and every president in order to govern needs to enter into a coalition. Brazilians said that former President Lula [Luiz Inácio Lula da Silva] could manage a coalition and Dilma could not. She had a cabinet with many parties, and it was an unwieldy coalition to manage. And again, as the economy weakened, and corruption started coming to light, her supposed allies thought they could gain some ground and then her actual opponents joined them.

‘What’s problematic for Brazilian democracy is that this process does not have broader legitimacy.’ — Frances Hagopian

GAZETTE: What about her support among Brazil’s poor, who benefited from her government’s social programs? Did she lose support among them?

HAGOPIAN: The support for impeachment peaked in March at 68 percent. In July, it was 58 percent. And the truly interesting thing is that there is no a huge difference between the level of education and income in those who favor her impeachment. She still has support among the popular sectors — 30, 40 percent — but it isn’t simply the wealthy and well-educated who support the impeachment.

GAZETTE: What impact is this going to have on Brazilian democracy? Rousseff has said this is a coup.

HAGOPIAN: This is not a coup because it followed constitutional procedures. But what’s problematic for Brazilian democracy is that this process does not have broader legitimacy. There are many people, supporters and opponents of the impeachment, who feel this was a necessary action to remove the president — without clear charges — in order to govern and right the economy. But that is not the way democracy is supposed to work. What does this suggest for the future? If presidents are unpopular or are not doing well, should we just remove them? Without commenting on the merits of the charges against her, it’s not a good precedent to remove presidents just because they are unpopular.

GAZETTE: All this political drama was unfolding as the Olympic Games were taking place. What do you think of the way Brazil hosted the games?

HAGOPIAN: Brazil exceeded expectations, given how low the baseline was, and given the extraordinarily difficult circumstances in which Rio served as host. Most cities don’t host the Olympic Games in a country in which the economy shrank by 3.8 percent the preceding year. The state of Rio also passed the security test. There were no terrorist attacks, and the most widely reported armed robbery attempt turned out to be a hoax. Brazil celebrated its diversity, and Rio will inherit some badly needed infrastructural improvements.