The makings of Merrick Garland 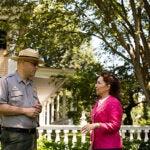 Addressing the incoming class at Harvard Law School on Friday, U.S. Supreme Court nominee Merrick Garland ’74, J.D. ’77, recalled how, as a federal prosecutor, he helped convict the Oklahoma City bombers and the Unabomber, in cases that garnered him national attention and acclaim.

He also shared plenty of not-so-famous details about his life, such as his addiction to his iPad, his passion for volunteerism, and his adoration of J.K. Rowling, author of the “Harry Potter” series.

As a member of Harvard’s Board of Overseers, Garland, 63, was even a force behind Rowling’s selection as the University’s 2008 Commencement speaker.

He related that when one of his daughters was young, she was having trouble reading.

Rowling’s resulting speech remains one of the most popular of the past decade, accruing nearly 2.5 million views on YouTube.

Garland, who is currently chief judge of the U.S. Court of Appeals for the District of Columbia — often called the second-most important court in the country — was nominated to the Supreme Court by President Obama, J.D. ’91, in March following the death of Associate Justice Antonin Scalia, L.L.B. ’60.

But with Obama in his lame-duck year, Republican Senate Majority Leader Mitch McConnell, who sets the Senate’s agenda, has declined to begin Garland’s confirmation process, saying it should be up to the next elected president to fill Scalia’s seat.

Garland, who chatted onstage with Harvard Law School Dean Martha Minow in front of hundreds of students, most in just their second day of orientation, said nothing about his nomination to the top court, or about the partisan national debates over the court vacancy.

But in his talk with the dean, who described her guest as “one of my heroes,” Garland showed self-deprecating humor, a sharp memory, and a sense of compassion.

Appropriately, Minow started their 50-minute question-and-answer session by asking Garland what he remembered about being a student at the Law School.

‘You have to think of your life not as flex time, but as a flex life.’ — Merrick Garland

“Unfortunately, my recollect is that ‘The Paper Chase’ had just come out the year before, so all of the prospective One L’s [first-year students] en masse went to the theater in Harvard Square and were scared out of our minds,” he said, referring to the 1973 movie that starred John Houseman as a demanding Harvard Law professor. “That’s pretty much how I remember Harvard Law School.”

During his career, as Minow noted, Garland has been a prosecutor, a private litigator, a negotiator, a teacher (including briefly at the Law School, which he described as “the hardest job I’ve ever had”), and a mentor, holding three high posts in the U.S. Department of Justice before being nominated to the U.S. Court of Appeals in 1997 by President Bill Clinton.

As a federal prosecutor, Garland handled everything from white-collar fraud and espionage cases to helping prepare security for the Olympics to prosecuting Ted Kaczynski, the Unabomber.

“My first case involved a housing project that had been taken over by a violent gang from New York. Mothers and grandmothers, terrorized,” he said. “We had to earn their trust, their belief that we would succeed and get these people arrested and convicted and they wouldn’t come back and kill them. It’s enormously different than what you do in a law firm.” 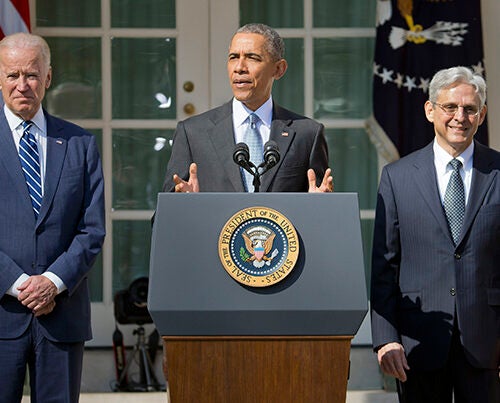 As a prosecutor in the Oklahoma City domestic terrorist attack, Garland recounted vivid details of the trail of clues that investigators followed, then paused to compose himself before describing what it was like to stand before the twisted and pancaked remains of the Alfred P. Murrah Federal Building, where 168 people were killed.

Because Oklahoma City’s courthouse had also been damaged in the blast, the principal defendant’s initial hearing was held at a nearby Air Force base. Reporters were gathered outside, but were being refused entrance, Garland remembered.

“I told them, ‘We’re not going to have the first investigation of domestic terrorism and conspiracy in secret.’ So they went out and let the press in,” he said.

Asked how he would advise the Class of 2019 as it studies and looks to the future, Garland focused on the practical.

He said that while it’s important to plan — and only take on a mortgage you can afford — one never knows what will happen in a career, so don’t be too set on personal goals. Garland himself originally set out to be an antitrust lawyer.

There will be times when work will be overwhelming, Garland said, and times when it will not.

“You have to think of your life not as flex time, but as a flex life,” he said. “No one’s promising you it’s going to be a vacation. This week, maybe!”

And he urged students to step beyond law school and volunteer, as he has done, tutoring elementary students in reading in the D.C. area, and helping “the Xerox guy” at his former law firm get through college. “He’s now a lawyer,” Garland said proudly.

“Some parts will come easy, and some parts will come hard. Don’t get too down on yourself about this: It’s just the way it is,” he said in closing. “One of my favorite lines from ‘Harry Potter’ is Dumbledore saying to Harry, ‘It’s not what your abilities are that make you what you are, it’s your choices.’ So make good choices.”