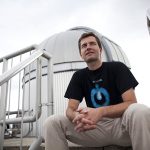 Paul C. Martin, former dean of the Harvard Division of Applied Sciences and the John Hasbrouck Van Vleck Professor of Pure and Applied Physics Emeritus, died on Sunday. He was 85 years old.

During more than five decades of service as a faculty member and dean, Martin helped to guide the development of engineering and applied sciences at Harvard, played a leadership role on a wide range of University initiatives, and was an influential voice on science and technology policy at the national level.

He was named dean of the Division of Applied Sciences, the precursor to the John A. Paulson School of Engineering and Applied Sciences (SEAS), in 1977 and held the post for 20 years. During his deanship, Martin oversaw the launch of the first stand-alone concentration in computer science at Harvard and recruited key computer science, material sciences, and atmospheric sciences faculty to the growing division. Construction on the Maxwell-Dworkin building, now a central part of the SEAS campus, also began under his leadership. He made fostering collaboration one of his priorities as dean, and the multidisciplinary partnerships he forged and strengthened during his tenure continue to be defining characteristics of SEAS.

Martin was also a committed institutional citizen, leaving his mark on a variety of important University policies and practices. His 1977 report on undergraduate concentrations argued persuasively that academic departments should not pick and choose which students to admit.

Working closely with fellow deans and Harvard administrators, Martin made important contributions to Harvard’s policy on technology transfer and during the early 1980s helped University officials adapt strategies to utilize computers effectively. He worked tirelessly to ensure that every Faculty of Arts and Sciences building had broadband Internet access at a time when the merits of information ubiquity were not obvious to most people.

In 1982, Martin became the first occupant of the Van Vleck Chair, named after the former Division of Engineering and Applied Sciences dean and Nobel laureate physicist. After stepping down as dean in 1997, Martin continued to serve on the faculty at SEAS and in the Department of Physics, most recently with emeritus status.

“When you worked with Paul, you worked into the night hours and over the weekends, and you didn’t work through intermediaries, because he had none,” said former SEAS Interim Dean Harry R. Lewis, the Gordon McKay Professor of Computer Science. “He did things himself, to make sure everything was done right — every logical flaw was rooted out, every word was written properly, and every argument and viewpoint was taken into account and either incorporated or countered. And yet he was kind and supportive to those of us who couldn’t keep up with him. He wanted the best from everyone, but he didn’t expect that your best would be as good as his, as long as you shared in his ideals and in his hard work.”

“Paul served for several decades as de facto dean of science under FAS Deans [Henry] Rosovsky and [A. Michael] Spence and had a lasting influence on the structure and future of science in the University,” added Michael B. McElroy, the Gilbert Butler Professor of Environmental Studies. “He played a critical role in the creation of the Department of Earth and Planetary Sciences, forging a new vision for the field that recognized the essential unity of the solid Earth, atmospheric and ocean sciences, and in the creation of a new undergraduate concentration on environmental science and public policy. He was an individual of exceptional intellectual quality and depth.”

Expressions of condolence may be addressed to his widow, Ann Martin, 27 Stone Road, Belmont, MA 02478.

In lieu of flowers, the family has requested that donations be made to the Union of Concerned Scientists, 2 Brattle Square, Cambridge, MA 02138-3780.

Details of a fall memorial service will be announced later.