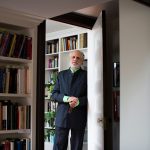 Those were among the watchwords at the annual Harvard Heroes celebration, held Monday at Sanders Theatre. Hundreds of staff members packed the benches and the balcony to applaud 63 colleagues who were honored for their strong commitment to a job well done, and to listen to remarks from President Drew Faust and Executive Vice President Katie Lapp.

“You work to make Harvard better tomorrow than it is today,” Faust told the group, in which every School and department at the University was represented. She spoke about each of the honorees, who ranged from IT professionals and research administrators to Eudeen Green, the longtime custodial crew chief of William James Hall, and Dan Twomey, a sergeant with the Harvard University Police Department.

The group filed in to Sanders to raucous cheers and Fatboy Slim’s “Praise You.” Lapp and Faust passed the mic back and forth in saluting this year’s Heroes, who have spearheaded special projects, advised students, and pulled off complicated events with good grace.

The ceremony ended with videos showcasing the Heroes’ favorite memories working at Harvard, tales of their strangest days on the job, and, on a humorous note, a list of the most overused acronyms and phrases at the University.

“Your best work is often taken for granted,” Faust said when recognizing Valerie Nelson, associate director for environmental public health in campus services. It was a remark suited for the whole group, at a ceremony from which they departed a little less unsung.