How to curb the madness 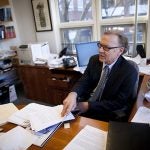 As the nation mourns yet another mass shooting and experts on everything from gay rights to gun control to racial and ethnic hatred to terrorism try to make sense of the Orlando night club massacre, the Gazette asked Harvard analysts in various fields a question that runs through these attacks: How can we best halt this drumbeat of mass violence?

Juliette Kayyem, former top official in the U.S. Department of Homeland Security and now lecturer in public policy at the Belfer Center for Science and International Affairs at Harvard Kennedy School:

As we think about policy choices ahead, there will be a strong tendency to focus on the details leading up to Orlando. We don’t know all of [attacker] Omar Mateen’s motivations. What we do know is that rampage murderers use high-volume, rapid-firing guns.

A nation cannot design a policy around what it thinks it knows about one incident. In fact, the search for facts diverts us from what we should be concentrating on. By focusing on “motivation,” we perpetuate the notion by defenders of current gun laws that we could be “safe” if only we knew more about the individuals who threaten us. Instead, as we work to build good policy, we should focus on the “means” — yes, the guns — because there is a difference between safer and safe. The former is an achievable policy and points to concrete steps we can take. The other is a futile, childish hope.

The first thing that I would say is that this is just such an unbelievably immense, heartbreaking tragedy for so many of us in the LBGTQ community, in communities of color, in Muslim and other faith communities, in Florida, you name it. It’s a terrible, terrible, terrible tragedy. And I think it has a number of dimensions.

We need to think about why this nightclub, and why these people, and why that night. And that raises, I think, a whole set of other issues about the ways in which queer communities, communities of color, queer communities of color, the most vulnerable people in society, are routinely targeted as they were in Charleston, S.C., a year ago, and as they are on an almost daily basis throughout the country because of who they are. When you live in a country that has laws that discriminate and that target vulnerable populations like queer people and people of color and immigrants and people who may look and love differently than others, we need to take a cold, hard look in the mirror and figure out why we are a nation fueled by prejudice, whose policies only perpetuate that prejudice.

And then I also think we have to ask ourselves why our first impulse, whenever this kind of violence, these mass shootings, occur, is to try to find some kind of foreign entity to blame it on … We know that Omar Mateen follows Islam, but he was born and raised in the United States. The toxic masculinity, the homophobia, perhaps even the self-hatred and the violent tendencies that all came together in that deadly moment on Sunday are things that have been cultivated right here in the homeland.

If you think about what all of those folks were doing on Saturday night, they were trying to be free, they were dancing and singing and drinking and loving and hanging out and flirting and doing all the things that one does when we feel safe. And to have that cut short by gunfire and by all the other things that fueled it is a deeply ironic element of this particular tragedy.

Ronald Schouten, director of Massachusetts General Hospital’s Law and Psychiatry Service and associate professor of psychiatry at Harvard Medical School, who studies the psychology of terrorism:

The answer to “How to stop it?” is a long way from being answered because we first need to define what “it” is, and then what causes “it.” Taking a medical approach, you can’t develop a treatment until you know what the illness is, and if you are going to prevent the illness, you need to know the cause.

In terms of “it,” this was an act of extremist violence. Labeling it as “right wing” or “Islamic extremist” makes us feel better because we have attached a label and it allows for blame to be laid on a specific group. But it does not point the way to prevention, except for those who think most simplistically and favor exclusion of broad categories of people based on their religion and ethnicity and/or jettisoning the Constitution. Both are wrong-headed and destructive, but the fear mongering makes for what some consider good politics. In fact, such simplistic solutions are exactly what extremists want because it would tear at the heart of our society.

There is rarely a simple, straightforward motivation for such violence. In the majority of cases, the perpetrator holds some grievance against the targeted group or society. It may be a personal grievance, arising out of their own experience, or a matter of moral outrage felt on behalf of some group with which the perpetrator identifies or with which he or she sympathizes. That begs the question of why some people continue on what we refer to as the pathway to violence, and decide that the answer to that grievance lies in violence.

I think prevention will require two things: first, maintaining and strengthening our sense of community so that the vast majority of society feels that we are in this together, encouraging positive bystander behavior so that we increase the chance of prevention, and strengthening our resilience if and when attacks occur; second, ongoing study to understand the warning signs that portend an act of violence and allow for intervention by families, community leaders, clinicians, and law enforcement.

Steven Pinker, the Johnstone Family Professor of Psychology, is a cognitive scientist and experimental psychologist and the author of the 2011 book “The Better Angels of Our Nature: Why Violence Has Declined,” which examines a long-term trend away from violence across human history:

The honest answer is that we can’t stop them. Despite the round-the-clock media coverage, mass shootings are in fact rare compared to the more than 35 homicides that show up on police blotters every day. And rare events are inherently difficult to predict and control. In a country of 315 million people and almost as many weapons (which won’t evaporate any time soon), nothing can prevent .0001 percent of those people from wreaking revenge or gaining notoriety by the only guaranteed recipe for becoming famous: killing a lot of innocent people.

The best we can do is try to lower the odds. Two measures are common sense: outlawing or restricting bloodbath weapons, and increasing the reach of mental health services. (Most mass shooters have a history of disturbance.) Another is trickier: keeping media coverage and officials’ responses in perspective — currently they are massively out of line with the actual level of harm — so as not to provide a perverse incentive for angry losers to “make a difference” in the only way available, even if they only get to enjoy their fame in the anticipation of it.

The same is true for terrorism, which almost by definition is a tactic to exploit the media. And for terrorist attacks, anything that can hasten the waning of the prestige of the cause would help. We don’t see anarchists or Marxists bombing cafes anymore because they no longer feel they are part of a glorious historical movement.

David Carrasco is the Neil L. Rudenstine Professor of the Study of Latin America:

This is important to notice as we mourn together: The fact that the majority of the victims of this terror-hate attack were Latinos is strikingly painful to me.

In the midst of this horror there is this small sign of hope — the tremendous support of gay people, gay Latinos by their families and the wider community. This is a sign of progress, that love can rise to meet hate and fear. But we all have a long, tough road ahead. Love-directed politics and politics you can dance to is the best way.

We did some work recently where we took data on public mass shootings and looked at the time between events. Our analysis showed that the length of the intervals between mass shootings has shortened since 2011, 2012. You look at the signal that statistical technique gives you and go back and think: What changed? What could explain the changing process that’s producing these mass shootings?

What seems clear is that it’s not a decline in mental health that suddenly happened. You can’t look back and say, “Oh, we introduced a piece of legislation then, or overturned another piece of legislation then.” It seems to me that the idea of mass shootings is more accessible to people than it was in the past. That’s one hypothesis you could draw from what we saw.

How we stop them? I’m not saying this is as an epidemiologist, but you can think about it as a contagion. You’re much better off preventing an epidemic before it’s widespread. So I think that all of our efforts are likely to bear fruit in the long run, not the short run. We won’t do something and see an enormous drop immediately in these types of events. So anybody interested in stopping them has to stay interested in the long term.

In the longer term, there are all sorts of things that we can do. In Massachusetts it’s not possible for people to buy military-style weapons, like AR15s, that have clearly increased the body count in these sorts of incidents and make killing lots of people far easier than need be. In California, they have gun-violence restraining orders. When family members are worried that someone is unstable and has access to guns, there are ways to remove the guns, either temporarily or longer term. Similar laws are in place in Connecticut, similar laws are in place in Indianapolis. That’s a model that potentially has an enormous amount of power — maybe less for mass shootings than for things like suicides.

Universal background checks aren’t necessarily a fix, but they certainly are part of an overall effort that collectively, I think, has changed social norms about guns and gun ownership in the U.S. Two gun companies’ stocks went up 7 percent yesterday. More guns have entered the market in the past two years than had entered the market the four years before that. There are lots of things that make it a really hard battle. With respect to mass shootings, they are these intensive interventions — law enforcement, mental health interventions — that get deployed for people who are really high on people’s list of worries.

Look, any gun owner, any non-gun owner in the U.S., if they have concerns about somebody’s stability and access to guns, has a responsibility to act. There are heroes of this event, and I think we all need to be more heroic.

This story has been edited for length and clarity.