Together in sorrow, and resolve 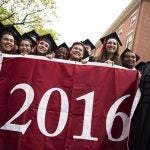 “I am heartbroken. I am absolutely heartbroken,” she said, adding: “I think it’s a travesty that this country can’t get it together and enact some sensible gun control measures.”

Early Sunday morning a gunman in Orlando, Fla., who claimed allegiance to the Islamic State, opened fire with a handgun and a semi-automatic assault rifle in a crowded gay nightclub, leaving 49 dead and 53 wounded. It was the deadliest mass shooting in U.S. history.

While questions lingered over the shooter’s background, and debates on mental health and gun control intensified, hundreds of members of the Harvard community gathered at Tercentenary Theatre to mourn the victims.

People in the crowd hugged and held hands and bowed their heads in silence. They also joined in song, accompanying Eden Girma ’18: “We who believe in freedom cannot rest until it comes.”

Jonathan Walton, Plummer Professor of Christian Morals and Pusey Minister in the Memorial Church, offered remarks during the service, as did Timothy P. McCarthy, adjunct lecturer on public policy and program director of the Carr Center for Human Rights Policy, and Taymullah Abdur-Rahman, chaplain of the Harvard Islamic Society.

“I am challenging myself today and I am challenging all the Muslims that I know to show up, to show up to stand in solidarity with any marginalized group who may not have a voice or the agency, who may have deficient numbers, to show that we can serve one another, that our lives should be a training and preparation to serve each other,” said Abdur-Rahman.

In closing, Walton encouraged the crowd to write down on colored cards that had been passed out how they planned to stand up to hate.

“We want you to leave this Yard this evening with a renewed conviction that we will not accept a new normal of one nation under a gun,” said Walton. “Standing in love. Standing in love tonight means we are going to stand against hate tomorrow. And the question we all have to ask of ourselves is ‘What are we going to do?’”

Young and old took up Walton’s call, pressing their cards with their written commitments to the steps of Memorial Church with rainbow-colored tape.

“I will write letters to legislators to ask them to stop supporting the NRA,” read one card.

“I will be a voice for the voiceless in all the places I am privileged to speak. And I will speak,” read another.

“I will walk in peace and love,” someone had written on a blue card, “to my very last breath.”