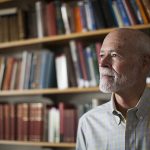 Labors of love for scholar at heart

Each year on Commencement Day, the high sheriff of Middlesex County takes the stage on the south porch of Memorial Church, calling Morning Exercises to order in stentorian tones. But before the sheriff takes a single step, his role and a thousand other details have been meticulously organized by the woman in charge of it all: Grace Scheibner, director of Harvard’s Commencement office.

“I’ve been compared to everything from a military general to the director of ‘The Ten Commandments,’” said Scheibner, smiling. “There’s a tremendous amount of orchestration involved, and there is no dress rehearsal. No matter what happens, you have to remain calm.”

The day after Commencement, Scheibner pivots to planning next year’s festivities.

“It takes a year to put together a ceremony that lasts less than two hours,” she said.

Scheibner arrived at Harvard in the late 1980s, earning her A.L.B. in psychology from Harvard Extension School and later completing the coursework for a master’s degree there. She also worked on the University’s behalf at several international conferences on AIDS and other issues in the early 1990s.

She became Harvard’s first Commencement director in 1992, and has remained its only one until now: She is retiring June 30 after 24 years.

“People say I ought to write a book,” Scheibner said. “I have so many stories about each year’s Commencement, because each one is different.”

She has met many luminaries who have participated in Commencement ceremonies, including “Harry Potter” author J.K. Rowling, who graciously signed autographs for several staff members when she spoke in 2008; Gen. Colin Powell, who spoke at the first Commencement Scheibner directed, in 1993; and former United Nations Secretary-General Kofi Annan, whose private plane was unavailable to transport him to Cambridge in May 2004 because it was being used to distribute food to Nigerian refugees.

“The general order of the day hasn’t changed much since 1642,” Scheibner said, referring to iconic Commencement moments such as the sheriff’s words, the Latin oration, and the Harvard Hymn. “But every year unfolds differently, and there are always surprises.”

Aretha Franklin, who performed “The Star-Spangled Banner” at Commencement in 2014, was “a lady to her fingertips,” Scheibner said. Her favorite moment with the singer came as Scheibner shepherded Franklin and the day’s other honorary degree recipients to Massachusetts Hall to be robed.

“She stood on the steps of Mass Hall and just looked,” Scheibner recalled. “There were students and families and photographers in the Yard, but she wanted to take it all in. She was transfixed.”

“I have a real passion for this job. I believe that Commencement is for the students, their families, and their loved ones, and I want to make sure it is a cherished occasion that leaves them with happy memories.”