Celebrating a decade in São Paulo 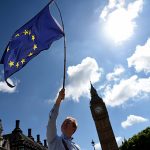 After Brexit, a changed future

In a few short weeks, the world will turn its attention to Rio de Janeiro for the Olympic Games. But before any medals are awarded, Harvard celebrated two of its own milestones in Brazil: the 10th anniversary of the Harvard Brazil Office and the first round of Lemann Brazil Research Fund grants.

The David Rockefeller Center for Latin American Studies at Harvard, founded in 1994, opened its São Paulo base in 2006 as the center formally began its Brazil Studies Program. For a decade, students and faculty have used the facility to strengthen ties with their colleagues across Brazil and to host numerous research projects and educational programs.

“There’s a distinct advantage that the Brazil Office affords our faculty and students,” explained Mark Elliott, Harvard’s vice provost for international affairs. “Maintaining long-term connections to Brazilian colleagues and resources accelerates the learning process, catalyzing their important research, and ensures broad dissemination to those who will benefit most from their discoveries.”

This past academic year alone, scores of Harvard students conducted research in Brazil — exploring everything from climate change in the Amazon rainforest to improving educational systems in the fast-growing urban centers.

The Brazil Studies Program also incorporated additional financial aid funds specifically for Brazilian graduate students, with a focus on public service in Schools across the University. These Lemann Fellowships — named in honor of the family of Jorge Paulo Lemann ’61, whose support enabled the awards — have made a Harvard education possible for more than 100 Brazilian students over the past decade who may not otherwise have been able to attend.

Now, thanks to additional support from the Lemann Foundation, funding is available to faculty and students whose academic work is based in or relates to Brazil. The Lemann Brazil Research Fund, which begins with a focus on education and public policy, was announced this spring and immediately drew a University-wide response, from which seven grants were announced today at an anniversary celebration in São Paulo.

“We’re thrilled with the caliber of this year’s applicants — particularly in the area of education, which is such a critical area of focus in Brazil — and look forward to an even more robust pool next year,” added Elliott.

This year’s grantees and their Brazilian collaborators include:

“The Learning for All Project”
Paola Uccelli, associate professor of education, Harvard Graduate School of Education