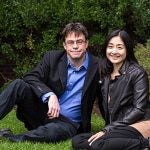 Babar, the beloved elephant of children’s literature known as much for his ability to overcome life’s challenges as for his snazzy, green three-piece suit and yellow crown, has returned to Harvard.

The popular pachyderm arrived this week as the focus of a new exhibition at Houghton Library titled in similar fashion to the iconic picture books. Called “Babar Comes to Houghton,” the display, which runs through Aug. 31, celebrates the donation of archival work of his creator, Jean de Brunhoff, the French writer and artist who brought him to life in 1931.

“Everybody likes elephants,” said Laurent de Brunhoff, Jean’s son, who kept expanding the world of Babar after his father died in 1937. “Children responded to this loving, encouraging, peaceful family.”

Laurent, who is now 90 and lives in Key West, Fla., visited Houghton along with his wife, Phyllis Rose, a 1964 Radcliffe College graduate who earned her Ph.D. in English literature. Author of “Parallel Lives: Five Victorian Marriages,” among other books, Rose described her time at Harvard as blissful, and said she still has dreams about riding her bike from the Radcliffe Quad to Harvard Yard.

“It was like I found Celesteville,” said Rose, referring to the imaginary capital of Babar’s kingdom.

This wasn’t de Brunhoff’s first trip to Harvard. In the mid-1960s, he visited on his first trip to the United States during a stopover arranged by his publisher at Random House, Robert Bernstein ’44. De Brunhoff put his adventures into watercolor on several pages of “Babar Comes to America” (1966) with highlights that included Babar’s taking in the Harvard-Yale game, getting an honorary degree, and relaxing at the Harvard Lampoon.

“I go through life with Babar,” said de Brunhoff. “When something happens to me, I want it to happen to Babar, too. I get enthusiastic about things, and I want Babar to get enthusiastic, too.”

More recent literary adventures have taken the elephant to the Olympics (“Babar’s Celesteville Games”) and the tropics (“Babar on Paradise Island”), but the Houghton exhibition features exclusively the creation of “ABC de Babar” (“Babar’s ABC”) from Jean’s early sketches to his masterful final hand-colored proofs.

“He had amazing sureness of drawing,” said Hope Mayo, Philip Hofer Curator of Printing and Graphic Arts, standing before a display case filled with rough penciled ideas for the “A” page, including an ane (donkey), arrosoir (watering can), and araignee (spider). “It’s remarkable how precise the early sketches are.”

Though the library is still searching for a first French edition of the book, Mayo said the archival donation gives Houghton a rare look at the entire creative process, particularly the preparatory materials involved in the writing and design.

“It documents a complete production of a children’s book in the 20th century,” she said. “It’s very talented.”

Before de Brunhoff and his wife visited Houghton last week, he reflected on taking over his father’s work in 1946.

“My mother was a widow with three boys, and life was very hard. When the war [World War II] was over and we had time to take stock of the situation, I missed my father. I had been trained as an artist, and just found myself drawing Babar. For me it was soothing and wonderful to be continuing what my father did,” he said.

In honor of the show, the library commissioned an original watercolor from de Brunhoff through the Mary Ryan Gallery in New York City. It shows Babar, “ABC de Babar” in hand, walking into Houghton. Rose, who first met de Brunhoff while in Paris researching her book “Jazz Cleopatra,” a biography of Josephine Baker, said she collaborates with de Brunhoff, writing storylines to pair with his illustrations.

“We’re so happy to have this book at Houghton because it belongs to the history of graphic design and book publishing,” she said. “Like his father, Laurent is a painter. I hope that people recognize it as beautiful artwork.”