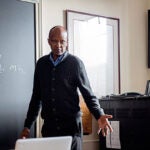 Except for a small piece of paper, Konstantin Simun might have worked with oil and canvas rather than the sculptures for which he is internationally known.

Originally hoping to be a painter, Simun was accepted to art school in his native Russia when he was 11 years old. He was given a piece of paper directing him to his first class.

“It was such a small piece of paper,” Simun said. “When I lost it, I was so disappointed. I went to the school anyway, and I decided to open every classroom door to find my class.”

After opening a few doors, Simun spotted a child making sculpture from clay. “The teacher in the room saw me and said, ‘Come in, come in.’ She gave me some clay, and I started to sculpt.”

While he enjoys oil painting and drawing, Simun has been sculpting ever since.

Simun emigrated to the United States in 1988 with his family and now lives in Allston. This month, three of his art pieces — Venus, Allston Venus, and Highway Flower — are gathered in a free public exhibit titled “Happy Birthday, Venus!” at the Harvard Ed Portal. A reception for the exhibit, which is on display through June 21, will be held June 2.

The Ed Portal exhibit is “a tribute to Botticelli,” Simun said, referring to Sandro Botticelli’s “The Birth of Venus,” a 15th-century painting depicting a naked Venus emerging from the ocean. Simun’s tribute detours from Botticelli’s work mainly because of the Allston artist’s primary art medium: found objects.

“The question is: Trash or treasure?” he said. “One man’s trash is another man’s treasure.”

“When I came to America, I saw trash on the street, which was so foreign to me,” he said. “Also, the trash here was so interesting. Here, trash is colorful, almost like toys. And the technology in something as simple as a plastic bottle — it’s incredible.”

“We have been members of the Ed Portal for at least 10 years now,” Simoun said, adding that her children have been mentored at the Ed Portal during that time. “I pass by the Ed Portal gallery nearly every day, and often thought it would be a perfect space to show my father’s work. It has so much light, and the huge windows turn passers-by into an audience.”

The Harvard Ed Portal’s Crossings Gallery routinely showcases work from both local and Harvard artists. Simun’s project is the first of what the Ed Portal hopes to be many outdoor exhibits.

While Simun’s primarily focus is art made from found objects, one of his most renowned works is the 1966 monument Broken Ring near St. Petersburg, which honors the millions of lives lost in the World War II Leningrad blockade.

Simun, who was born in Leningrad, was just 5 years old when the siege began, and was one of many children evacuated from the war zone. “I was very young when it began,” he said. “But I remember it very well.”

Simun’s work can be found in Russia’s largest museums and in the streets of Cambridge. He created the whimsical Igor Fokin Memorial Sculpture, honoring a street puppeteer who was also born in St. Petersburg.

While he realizes not everyone may see the same potential for art in found objects, Simun said the important thing is to “learn how to see” art.

“I see art everywhere I look. Sometimes people ask me how I work, and I say: ‘I’m just cleaning the street,’” he said, laughing. “But everything I pick up either is, or it becomes, a work of art.”

This month, three of Simun’s pieces — Venus, Allston Venus, and Highway Flower — are gathered in a free, public exhibit titled “Happy Birthday, Venus!” at the Harvard Ed Portal. A reception for the exhibit, on display through June 21, will be held June 2.