The history of Harvard gates 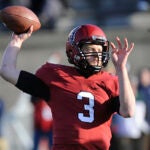 From Harvard to the NFL

The 25 gates that rim Harvard Yard are works of architectural art, not simply instruments of control.

A new book, “Gates of Harvard Yard” (Princeton Architectural Press, $15.95), celebrates these exquisite essays in brick, stone, and wrought-iron, and bids the thousands who walk through them every day to stop, look, and reflect on their essential contribution to the beauty of Harvard’s campus.

The book’s editor, Pulitzer Prize-winning Chicago Tribune architecture critic Blair Kamin, was captivated by the gates during his Nieman fellowship year in 2012-13 and co-taught a Wintersession class about them. The outcome is the book, which features color photographs by Ralph Lieberman, sketches by Roger Erickson, and a map by Christophe Beck.

As Nieman Foundation curator Ann Marie Lipinski writes in her foreword: “What ultimately inspires Kamin is the idea that a gate is indeed a physical thing, but also an aspiration — of beginning, of belonging, of entry into something bigger than oneself.”