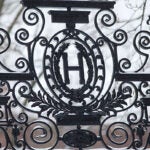 The history of Harvard gates

Kapena Baptista ’16 grew up in a Mexican neighborhood in Los Angeles. Most of his friends and classmates were Mexican-American. He spoke Spanish at home with his Mexican mother.

But Kapena is not a Mexican name. It’s a Hawaiian word meaning “captain,” and it was given to him by his Hawaiian great-grandmother. A singer of some renown in her day in Hawaii, she also passed on to her great-grandson a talent for music. Baptista is a classically trained bassoonist with interests ranging from folk music to electronica.

But one thing Baptista’s great-grandmother didn’t hand down to him was the Hawaiian language. That’s because when she was a child, her native tongue was banned from the islands’ schools under repressive U.S. policies. “If students spoke Hawaiian, they’d get hit,” Baptista said in an interview. Today, there are only a thousand native speakers, on the isolated island of Ni’ihau. But since the 1970s, a revival movement has led thousands more Hawaiians to learn their ancestors’ language.

It was Baptista’s own budding interest in rediscovering his Hawaiian roots that led to his thesis project at Harvard College, where he has completed a joint concentration in music and social anthropology. Baptista is also part of the inaugural cohort of Harvard Teacher Fellows, and he will begin a Fulbright Scholarship next fall. (More on all that later.)

Baptista’s thesis centered on a nightclub in New York City, yet in a way his research brought him closer than ever to his late great-grandmother in Hawaii. She died a year after he was born. “I grew up with a lot of her recordings,” said Baptista. “That was the only thing that reminded me that I was Hawaiian.” By happenstance, while at Harvard, Baptista learned the forgotten history of many women like his great-grandmother: From 1937 to 1966, some of Hawaii’s top female singers and hula dancers traveled to and lived in the Big Apple to perform in one of the city’s hottest nightclubs, the Hawaiian Room at the Lexington Hotel.

The 1930s, Baptista explained, were “a time when a lot of Hawaiian music wasn’t performed by Hawaiians. It was this very vaudeville, Tin Pan Alley, hootchy-kootchy kind of version of it.” The managers of the Hawaiian Room, he said, “wanted to do the real thing. So they flew out all these [singers and musicians] from Hawaii and started this tradition.” Some of the women lived in New York for years, and when they returned, “a good majority of them lived right next to each other in Hawaii,” said Baptista. “It was something they bonded over.”

Baptista interviewed many of the former Hawaiian Room singers at a reunion they held at the Lexington. “Some of them knew my great-grandmother” in Hawaii, he said. “One of them was actually distantly related, like a third cousin.” The women, ranging in age from their 60s to 80s, were excited to learn that a young Hawaiian was attending Harvard. “There’s a lot of disparity affecting Hawaiian populations when it pertains to education,” said Baptista. “Native Hawaiian youth are some of the most heavily incarcerated in the country. So when these women heard I went to Harvard, they were like, ‘What the hell?’” he recalled with a laugh.

The singers were also eager to share their stories with Baptista at the reunion, as well as later, when he traveled to Hawaii on a research trip funded in part by a Mellon Mays Undergraduate Fellowship.

“The Hawaiian Room women were doing what was called hapa-haole,” Baptista said. “It literally means ‘half-white.’ It’s Hawaiian music, but it’s sung in English.” Since the indigenous revival movement of the 1970s, many Hawaiians have looked upon hapa-haole with disdain, seeing it as “touristy.” But Baptista is more sympathetic. “They knew what they were doing. But it was a time when they had to make money,” he said. “They were surviving.”

Moreover, the singers were promoting at least some form of Hawaiian culture at a time of rampant racism, Baptista said, noting that when the singers toured the South, they had to enter venues through the “colored” doors. “They’re really unapologetic for doing what they had to do to survive, and I admire them for that. They’re brilliant women. And I get a lot of energy from that, knowing what they went through and that that’s where my family comes from as well. I see a lot of my family stories in their stories.”

Just as his great-grandmother suffered through anti-Hawaiian bias while in school, Baptista himself encountered racism while attending, on a scholarship, a mostly white boarding school in California. One of his few Mexican classmates heard wisecracks about “selling oranges on spring break,” for example.

Such experiences, historical and personal, fuel Baptista’s drive to become a teacher. “I want to make sure students see themselves in the curriculum and feel at home in the classroom, and are able to thrive intellectually — not just learning about themselves but having windows onto other perspectives as well,” he said.

Baptista spent some time in front of a classroom his first summer back in California, after freshman year at Harvard, as a teaching assistant mentoring disadvantaged students of color through the Pomona College Academy for Youth Success. “That’s when I realized this is what I want to do.”

Baptista was accepted into the first group of Harvard Teacher Fellows in a partnership with the Harvard Graduate School of Education (HGSE). He’s already taken some courses at HGSE, with more coursework and a residency in a local high school to come.

But Baptista will have to defer his participation in the program for a year, for a good reason: his Fulbright scholarship, which will take him to Portugal, where he’ll teach English and learn the Portuguese guitar. It turns out that Baptista is not only Mexican and Hawaiian, but also Portuguese. His great-grandfather was part of a migration of farm laborers from the Azores and Madeira to Hawaii. In fact, Baptista pointed out, the ukulele, the small guitar most widely associated with Hawaii, is actually a hybrid Portuguese-Hawaiian instrument.

Baptista will likely return from his Fulbright year with many more nuggets of knowledge of Portuguese music and history. As he put it, “There are other parts of me I need to discover.”