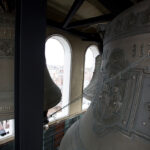 Tradition rings in the 365th Commencement

Four outstanding alumni recognized for their extraordinary contributions to society

The Graduate School of Arts and Sciences (GSAS) on May 25 awarded the Centennial Medal to four alumni who have made extraordinary contributions to society.

The medal, GSAS’s highest honor, was first awarded in 1989 on the occasion of the 100th anniversary of the School’s founding. Since that time, 108 accomplished alumni have received the medal, which is awarded at a celebratory luncheon the day before Commencement.

Few political scientists loom quite as large as Francis Fukuyama, Ph.D. ’81, and few can boast such a rich educational background. As an undergraduate, he studied classics with Allan Bloom at Cornell University. As a graduate student, he spent time with Roland Barthes and Jacques Derrida in Paris. At Harvard, he completed the final year of his Ph.D. in government on a fellowship he received through Samuel Huntington, a leading figure in comparative politics and international relations. Fukuyama began his career at the RAND Corp. in California and was a deputy director of policy planning in the U.S. Department of State. He is currently based at Stanford University, where he is the Olivier Nomellini Senior Fellow at the Freeman Spogli Institute for International Studies and director of the Center on Democracy, Development, and the Rule of Law.

“Intellectually I think he’s the student that Sam would be the proudest of,” said Graham Allison, director of the Belfer Center for Science and International Affairs and Douglas Dillon Professor of Government at the Harvard Kennedy School. “Like his teacher, Fukuyama asks fundamental questions about where political order comes from, and how it evolves, and the pros and cons of various forms. He does so with a commitment to scholarship and a courageous independence that never ducks uncomfortable and challenging conclusions.”

Mathematicians work in a world that many people find inaccessible, but David Mumford ’57, Ph.D. ’61, has a genius for building disciplinary bridges. His career has encompassed both pure and applied mathematics; he has made advances not only in the abstract world of proofs and theorems but also in the psychology of vision and the scientific modeling of thought. Mumford taught on the Harvard faculty for 35 years, from 1961, when he earned his Ph.D., until his appointment in 1996 as University Professor in the Division of Applied Math at Brown, where he is now emeritus. After leading the field of algebraic geometry for two decades, he made a remarkable transition to applied mathematics. He is particularly interested in pattern theory, visual perception, and the neurophysiology of vision, and has used statistical approaches to advance the field of computer vision and study some of the most puzzling mysteries of cognition.

One of the undergraduates in Mumford’s Harvard classroom was Joseph Harris, now Higgins Professor of Mathematics — a chair that Mumford himself held for 20 years. “It would be hard to overstate Mumford’s impact on mathematics,” said Harris. “The subject of algebraic geometry, which had been studied intensively for almost two centuries and which occupies a central place in mathematics, was completely transformed, largely as a result of his work.”

Professor and priest, historian and Jesuit, John O’Malley, Ph.D. ’65, is that rare scholar who has emerged as both an academic and spiritual leader. He taught for several years at the University of Detroit before returning to Cambridge to serve for nearly three decades as a distinguished professor of church history at the former Weston Jesuit School of Theology. He is now University Professor in the Department of Theology at Georgetown. He began his career as a scholar of Italian Renaissance intellectual history and went on to become a leading authority on early modern Catholicism. His religious dedication and passion for the study of history have encouraged countless others to follow in his footsteps.

“John is like the Pied Piper,” said Mark Massa, Th.D. ’87, professor of church history and dean of the Boston College School of Theology and Ministry, who studied history with O’Malley both as an undergraduate and as a graduate student. “A lot of my friends were inspired to go into history because of John’s ability to make it interesting, relevant, alive. He connected all the dots for us. William Faulkner once said that the past is not really dead, in fact it’s not even past — and I think John has the ability to make us see how that is true.”

A leading scholar of the economics of education, Cecilia Rouse ’86, Ph.D. ’92, completed a dissertation in economics that tackled a previously unexplored topic: the economic effects of attending community college rather than a traditional four-year college. “She opened a completely new research area,” said Lawrence Katz, Elisabeth Allison Professor of Economics and one of her primary advisors. “Almost all research on the economics of higher education focused on four-year schools, and in her dissertation, she broke new ground in trying to understand the increasingly important role community colleges have played, particularly for disadvantaged and minority students.”

Rouse went on to become co-chair of the American Economic Association’s Committee on the Status of Minority Groups in the Economics Profession, where she has championed a summer program that increases diversity in academia by preparing undergraduates for doctoral study. She also served as an economic advisor to the Clinton administration and on President Obama’s three-member Council of Economic Advisers. In 2012, she was named dean of the Woodrow Wilson School of Public and International Affairs at Princeton University, whose faculty she had joined in 1992. “There are economists who choose problems merely because they’re intellectually interesting,” said Lawrence Summers, Charles W. Eliot University Professor. “Ceci chooses problems because they are the real problems of our society. She is a model of the socially committed intellectual.”