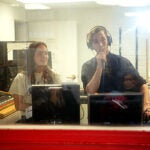 Harvard Art Museums exhibit a showcase for masterworks in progress

A new exhibit highlights the Harvard Art Museums’ extensive collection of 16th- and 17th-century drawings from the Low Countries, roughly today’s Netherlands, and offers visitors an intimate look at the hands of various Dutch and Flemish masters.

“Drawings from the Age of Bruegel, Rubens, and Rembrandt” features approximately 40 portraits, landscapes, sketches, and studies — the building blocks of future masterworks. The show begins Saturday and runs through Aug. 14.

Experts agree that it can be difficult to discern an artist’s own brushstrokes when viewing a painting completed in a workshop with the aid of pupils, said Edouard Kopp, the Maida and George Abrams Associate Curator of Drawings in the Division of European and American Art, who helped organize the new show and who curated a concurrent exhibition, “Flowers of Evil: Symbolist Drawings, 1870-1910.”  With drawings, said Kopp, “often you get closer to the proverbial hand of the master” and the artist’s “free creative spirit.”

That creativity shines in a number of works by Flemish Baroque painter Peter Paul Rubens, including his chalk-and-charcoal drawing “A Study for Christ for ‘The Elevation of the Cross’” (1610-1611). The sketch offers insight into Rubens’ vision for the central figure in his masterful oil-on-panel triptych.

The exhibit also highlights a “long tradition of collecting and studying drawings at the museum,” said Kopp.

That tradition dates to one of the museums’ earliest acquisitions, roughly 575 drawings and 15,000 prints donated to the Fogg Museum in 1898 by Belinda Lull Randall, who had inherited the trove from her brother, John Witt Randall of the Class of 1834. Through the years Harvard’s collection has expanded with support from donors such as Melvin R. Seiden ’52, J.D. ’55, and from savvy administrators, among them Paul J. Sachs, the son of the founder of Goldman Sachs and first associate director of the Fogg, who donated his own extensive collection of drawings to Harvard.

One of the most significant donations to Harvard’s holdings came in 1999 from Maida and George Abrams ’54, J.D. ’55. Their gift of 110 works transformed the collection into one of the most comprehensive in the United States.

“They formed really the most important private collection anywhere in the world of 17th-century Dutch drawings,” said William W. Robinson, curator of drawings emeritus, who curated the Dutch show and helped author a companion catalog featuring 100 of the most significant 16th- through 18th-century works from the Netherlandish, Dutch, and Flemish schools at the Harvard Art Museums.

When they started out, the Abramses “thought they would never be able to own a Rembrandt,” said Robinson. So the couple focused their attention “on the Rembrandt students. But in the end, they got several Rembrandts as well.”

Accordingly, the Abramses’ gift is key to a section of the exhibit that explores Rembrandt’s style and influence. In the third-floor gallery, works by the Dutch master hang next to drawings by his pupils and followers who, it is evident, embraced his techniques.

Scattered throughout the show, seascapes, panoramas, and views of farms and forests point to the emergence of landscape as a distinct artistic genre in the Netherlands in the middle of the 16th century. While it’s not entirely clear what led to the explosion of landscapes, said Kopp, some scholars have suggested it was important for the nation, after struggling under Habsburg rule, “to articulate and reinforce its national identity, and landscapes were a prime way to do it.”

Science also figures prominently in the exhibition. Each work was examined closely in the museums’ Straus Center for Conservation and Technical Studies, sometimes with surprising results. The 1638 drawing “Head of Nero Caesar Augustus” was thought to be by Rubens and an assistant, but questions about its origins had lingered — until now.

Using infrared digital photography, conservators and curators discovered a chalk sketch underneath the ink drawing. After close examination, museum experts agreed the pen work on the drawing varied greatly from Rubens’ “far looser and freer” technique of the 1630s, said Robinson. “Looking at the chalk drawing, it’s very robust, and very skillful, and very detailed, and you can only see that in the infrared,” he added. “We feel like that part is by Rubens, and then he just handed it off to a skilled workshop assistant who worked it up with a pen.”

In keeping with the museums’ commitment to teaching and learning, a number of works not included in the exhibit will be on display in the Art Study Center. Other companions to the exhibit include a website and a series of events, starting with a lecture in Menschel Hall on Tuesday (May 24).