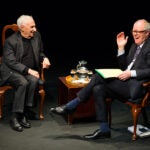 The architect as artist

Arts First, which ran from April 28 to May 1, featured visual exhibits and installations, theatrical and musical performances, dance, and other forms of creative expression. The festival, now in its 24th year, was begun by actor John Lithgow ’67 and Myra Mayman, founding director of Harvard’s Office for the Arts.

“John and Myra both felt that this should be an event every year which celebrates the vitality of art-making,” said Jack Megan, director of the Office for the Arts, which produces the festival.

Arts First has grown in size and scope over the years. It has expanded to four days, and last year saw an attendance of nearly 7,000.

“This year, we had to add performance slots to the Saturday afternoon Performance Fair, because there were more interested performers than performance spaces,” said Marin Orlosky Randow, Arts First coordinator, citing increased participation from graduate students and first-year undergraduates.

Art of the moment

The festival kicked off on Thursday with the Harvard Arts Medal ceremony, which this year honored architect Frank Gehry, a 1957 graduate of the Harvard Graduate School of Design, and was moderated by Lithgow.

Friday featured events such as Jazz on the Plaza and the Kirkland House gallery show of student and tutor artwork. On Sunday, performances by groups such as the Silk Road Ensemble, the Parker Quartet, and the Battle of the Bands at the Science Center Plaza tent rounded out the end of the celebration.

Saturday showed the festival at its height, with 11 performance venues across Harvard Yard, seven locations for art-making, and three public art installations by student artists. In total, 37 locations across  campus featured exhibits and performances over the weekend.

The Plaza was aflutter Saturday, with the Global Voices international musical performances in the tent, while families and students flocked to food trucks and local children muddied their hands at pottery wheels. Later, a drum circle erupted in a pop-up workshop led by the undergraduate percussion ensemble THUD.

“It’s really fun,” said Sabrina Yates ’19, a member of the University’s Hyperion Shakespeare Company and part of the ensemble performing an interactive version of “Much Ado About Nothing” in a tent. “Older people, younger people, families — everyone’s getting involved.”

In Radcliffe Yard, the 21st annual Harvard Pow Wow featured Native American singers, artists, and dancers from the University, the community, and around the country. The pow wow began with a grand entry, then a flag song and a performance honoring veterans, followed by intertribal dances.

For pre-med student SaNoah LaRocque ’19, one of the dancers and co-chair of the pow wow, Arts First is not just about showcasing art, but also the empowerment that comes from doing so.

“Having the native community here is really important for me so I can continue something I’ve been doing my whole life,” said LaRocque, who is from North Dakota and is a member of the Turtle Mountain Band of the Chippewa tribe. “To be here at Harvard and have our drums, our eagle feathers, our dancing … and to be able to share that with the community, is really meaningful.”

For Megan, that’s a big part of why the festival continues to be so significant for the Harvard community.

“I think it’s important to affirm the place of art-making and creativity in the life of a liberal arts institution. There are many ways of understanding the world around us,” said Megan. “Everyone comes out to support or share a piece of their creative identity, personal identity, and cultural identity — through art.”