The architect as artist 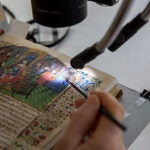 Guarding the dazzle of the past

Call Frank Gehry just an architect, and he just might correct you.

Some of the greatest architects in history were artists first, he likes to point out, including Italian masters such as Giotto, Michelangelo, and El Greco. Gehry himself took night classes in fine arts at the University of Southern California (USC) before turning his focus to building design. Even after his gaze shifted, many of his closest friends were, and remain, artists.

“I realized I was much closer to [artists],” said Gehry. “They were very hands-on. They were making things. It was very direct, not a lot of talk, not a lot of rhetoric. … It was emotional. It was feeling.”

An expressive hand is clearly behind the Pritzker Prize-winning architect’s extensive, creative body of work that includes the gleaming Guggenheim Museum in Bilbao, Spain, and the Walt Disney Concert Hall in Los Angeles. For many, his experimentation with unconventional materials and bold forms renders his buildings true works of art.

In honor of his varied creative achievements, Gehry received the Harvard Arts Medal on Thursday at Farkas Hall. The afternoon ceremony marked the annual kickoff to Arts First, Harvard’s four-day celebration of student and faculty creativity organized by the Office for the Arts, now in its 24th year.

In her remarks, Harvard President Drew Faust said that Gehry, the first architect to receive the award, had “created for the next generation not only a new vocabulary of form, but, to quote one of our design School professors, ‘a new vocabulary for the art of architecture itself.’”

Leaning on the dais, his new medal around his neck, Gehry appeared humbled. “Getting a medal from Harvard is special,” he said, “and calling it an arts medal is a big deal.”

Raised in Toronto, Gehry moved to Los Angeles with his family as a teenager in 1947. He worked for a company crafting and installing breakfast nooks for several years, until a USC ceramics class changed his life. The teacher, Glenn Lukens, was having a house built by the legendary architect Raphael Soriano. Lukens invited Gehry to the construction site.

“My eyes must have lit up,” Gehry said as he recalled watching Soriano, dressed all in black, direct a group of contractors. Lukens enrolled Gehry in an architecture class. He was a natural.

“That’s the first time I did well at anything,” said Gehry, who offered his comments during a heartfelt and humorous conversation with actor John Lithgow ’67, Art.D. ’05.

Gehry received his bachelor’s degree in architecture from USC in 1954 and went on to study city planning at the Harvard Graduate School of Design (GSD). (He didn’t complete the Harvard program but received an honorary doctorate from the GSD in 2000.) He established his Los Angeles practice in 1962 and created Gehry Partners, LLP, in 2001.

Speaking about what many consider his masterpiece, Bilbao, an undulating tapestry of curves and waves covered with a metallic skin, Gehry proudly noted that the project ended up less expensive and even more beautiful than anticipated. The museum was initially meant to be covered in stainless steel. But Gehry, the artist, knew better.

Instead, Gehry grabbed a small piece of titanium from his office, nailed it to a nearby telephone pole and waited. When the rain came the titanium “turned golden,” he recalled. To make up for the higher cost, Gehry used titanium sheets half the thickness of the steel. The end result came in on budget and striking. Noted architect Philip Johnson is said to have cried upon seeing the museum for the first time.

“It really worked,” said Gehry. “When you come upon it, it has that wonderful feeling of warmth in the metal.”

Lauded for his use of computers to push the boundaries of his work, Gehry said technology helped him incorporate the notion of movement into his designs.

“The only thing I am trying to do is put two notes together to make a feeling with inert materials. I’ve searched and searched for a long time, and the only place I could go was to express movement as the possible alternate for decoration.”

With the computer, he said, “I am able to demystify that and build.”

Admittedly at times “very” stubborn, Gehry also said that fruitful collaboration is central to his work and that he always looks for “some resonance” with a client before accepting a job. Incorporating a client’s advice and feedback, he said, is a key to keeping his work fresh.

“It’s a collaboration. It’s not the sound of one hand clapping,” he said, adding, “I think I would repeat myself if I did not have that kind of relationship.”

Still, he doesn’t take every job.

“I turned Donald Trump down seven times,” said Gehry to laughter from the crowd.

He lamented the lack of creativity and artistry in much of what he said passes for architecture in the built environment, referring to it instead as “construction.” He also called for more women to make their mark in the field.

“Our schools graduate at least 50 percent women in architecture, and we don’t see them. And we’ve got to do something about that.”

Stay the course, be yourself, and don’t give up, Gehry encouraged a young female architect in the crowd who was eager to defy convention with her own work and was seeking his wisdom.